AN “ANTI-TRESPASS PROGRAM” WITH DEEP CONNECTIONS

by Fergus Nolan, ©2919, blogging at MemphisTruth.org 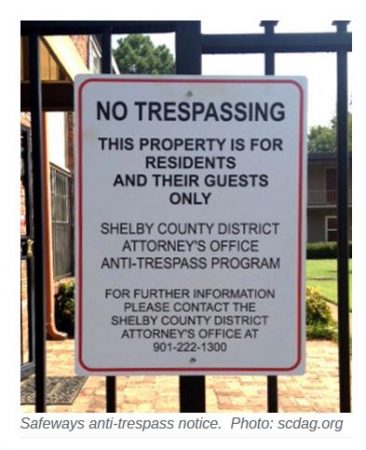 (Dec. 13, 2019) — Disclaimer:  The author, Fergus Nolan, has appeared in three Authorizations of Agency.

The Broken Windows theory of crime, first proposed in 1982, led to zero tolerance policies in police departments, and legislative strategies like minimum sentencing and three strikes at Federal and state levels.  These measures have had mixed success in crime reduction but a profound impact on mass incarceration.

Against this background, faced with rising crime statistics, Memphis Shelby Crime Commission was founded in 1997 as an affiliate of Memphis Tomorrow.  In 2006,  Memphis Fast Forward collaborated with Memphis Shelby Crime Commission to publish Operation Safe Community 1 covering 2007 through 2011, and two subsequent updates, OSC2 for 2012-2016 and the current version,  Operation Safe Community 3.

Memphis Fast Forward’s website has been a work in progress notice since at least 2016, but here is a 2015 version of the site courtesy of archive.org.  The 2015 steering committee had Bill Gibbons, the County and City mayors and Memphis Tomorrow members including Pitt Hyde.   Operation Safe Community’s website now redirects to the Memphis Shelby Crime Commission.

The objective of OSC was “to create an ambitions plan to reduce both violent and property crime through its public safety arm, the Memphis Shelby Crime Commission”.

The current Operation Safe Community 3, page 11, Objective C4, says that “reducing the number of crimes committed in apartment communities … will improve the safety and quality of life for apartment residents…”

To the DA, Authorization of Agency is a process administered jointly by the DA’s anti-trespass program and a non-profit corporation named Safeways, Inc.

Safeways was set up in 2013, has a bunch of executives in common with MSCC and the MGU, and receives $150K of its just over $250K budget directly from MPD.   It shares Suite 400 at 600 Jefferson with Memphis Shelby Crime Commission and MPD’s Real Time Crime Center, part of the Special Operations command, responsible for a lot of MPD’s questionable activities.  Safeways’ role is to recruit apartment businesses as clients, package crime information brokered from MPD to its clients, and administer the DA’s no-trespass program.

OSC3 requires “strict compliance with Shelby DA’s anti-trespass program on Safeways‘ client sites”. The anti-trespass program page states “once the apartment complex management completes enrollment in the program, tenants are notified, signs are posted on the property and local law enforcement are provided authorization of agency.”

This authorization of agency authorizes MPD, and soon SCSO, to make arrests of anyone unauthorized on a property.   It does not name names like the police version of AoA.

We include the Multi-Agency Gang Unit in the interrelationship table below, because the MGU was chartered just a year before Safeways, Inc., because there are so many board members in common, and because the MGU’s Gang Injunctions are similar to AoAs on steroids.  Prior to the establishment of MGU, MPD ran several operations which were geographical paramilitary sweeps.   See 3.pdf, 10.pdf and 25.pdf for internal MPD emails about Operation Safeway sweeps.  MGU is an Amy Weirich innovation and appears to have sprung from the same source as Safeways, Inc and the MPD’s AoA process.  The commonality of so many board members and executives, and the link to Memphis Tomorrow and MSCC strengthens this hypothesis.

Interrelationships between Safeways, MSCC and MGU. 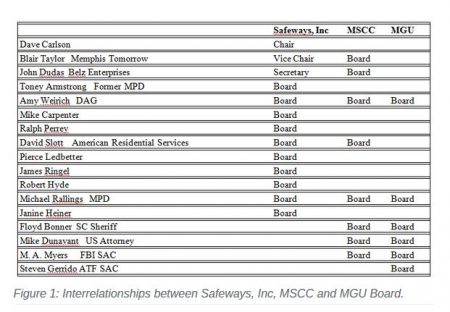