“I’M GOING TO TREAT IT AS THE SHAM IT IS” 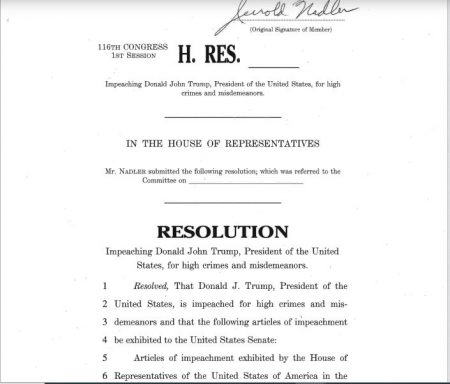 (Dec. 12, 2019) — In an interview with Bill Hemmer and Sandra Smith of Fox News shortly after 10:30 a.m. EST Thursday, Senate Judiciary Committee Chairman Lindsey Graham (R-SC) said if the House of Representatives votes favorably on two Articles of Impeachment against President Trump introduced by the House Judiciary Committee officially earlier Thursday morning and sends them to the Senate, he will dispense with the matter in “a week.”

As is customary, the Senate Judiciary Committee would examine the House’s case against the president prior to a trial in the full Senate, if one were to occur.

Graham said he believes the House’s efforts to impeach the president have been driven by “extreme partisans” who have not followed proper procedure and that if and when the matter arrives in his committee, he will “treat it as the sham it is.”

Beginning at 9:00 a.m. Thursday, the House Judiciary Committee began debating the two Articles of Impeachment, which cite Trump for “abuse of power” and “contempt of Congress.”  Democrats, who have the majority in the lower chamber, believe that Trump attempted to interfere in the 2020 election when he asked President Zelenskiy of Ukraine on a July 25 phone call to look into alleged corruption possibly involving Joe and Hunter Biden in 2016 and Ukrainian energy company Burisma Holdings.

Democrats say that Trump’s request of Zelenskiy to “do us a favor” by launching or relaunching an investigation was a solicitation of foreign interference in the 2020 election. Any reference to “2020,” however, appears nowhere in the call transcript released by the White House in late September.

Just prior to the release of the transcript, Speaker of the House Nancy Pelosi announced that an “impeachment inquiry” would ensue, delegating House Intelligence Committee Chairman Adam Schiff (D-CA28) with holding initial closed-door hearings to which Republicans vehemently objected.

After House Judiciary Committee Chairman Jerrold Nadler and ranking member Doug Collins gave their opening statements just after 9:00 a.m. on Thursday, a clerk read the full Articles into the record.  Rep. Jim Jordan (R-OH4) asked for a point of order to strike Article I, after which a robust debate ensued between Republicans and Democrats.

Each speaker Nadler recognized asked to “strike the last word” before making his or her points in five-minute increments.

Republicans claim that “due process” has not been permitted to Trump and the minority, while Democrats say that Trump’s actions constitute his having “put his personal interests above his country.”

To Hemmer and Smith, Graham said he plans to call no witnesses and wishes to see the “impeachment” process dispensed with for the good of the country, which he said could be done in a week’s time.

Update, 3:34 p.m.:  This article originally erroneously indicated that Schiff is a Republican; he is a Democrat.

Graham Plans to Dispense with Articles of Impeachment in “a Week” added on Thursday, December 12, 2019