“THAT IS NOT AN APOLOGY” 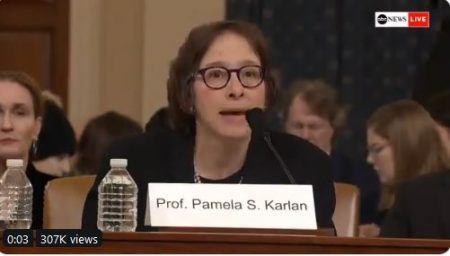 (Dec. 5, 2019) — In yesterday’s episode of the continuing saga in “As the Screwballs Turn” – also known as the “Nadler Follies” – four law professors testified as to the purported basis and wisdom of proceeding forward with the Democrats’ effort to impeach and remove President Trump.  Only one of them – Professor Jonathan Turley – made sense.  The others merely made fools of themselves and one – Professor Pamela Karlan, from Stanford Law School – seemed intent on scraping the bottom of the barrel in her quest to demonstrate the immediate need to impeach President Trump.

Specifically, with the choreographed assistance (i.e., a planted question) of Rep. Sheila Jackson Lee (D. TX), Karlan proceeded to concoct an example of why “Orange Man” must be impeached.  Representative Lee asked Karlan: “What comparisons, Professor, can we make between kings that the framers were afraid of and the president’s conduct today?”

Karlan responded: “So kings could do no wrong because the king’s word was law.  And contrary to what President Trump has said, Article II does not give him the power to do anything he wants,” adding, “I’ll just give you one example that shows you [the] difference between him and a king. Which is [sic, incomplete sentence] the Constitution says there can be no titles of nobility. So while the President can name his son Barron, he can’t make him a baron.”  And the leftists in the room began snickering.

When a law professor descends into the sewer – having intentionally bypassed the gutter – to use the 13-year-old son of the President (and First Lady) of the United States of America as a pawn in her juvenile homophone, you know she is desperate and in trouble, but because she is a rabid Democrat, that should come as no surprise.  Homophones are words which when audibly pronounced sound the same, but may be spelled differently and have different meanings, like “bear” and “bare.” After yesterday’s mendacious attempt at homophonic levity, Karlan has become the poster-child of what the impeachment effort is all about: 2016 revenge and nothing about a feigned “respect for the Constitution.”  Spare me.

Oh, and remember, Karlan was rumored to be under consideration for a nomination to the Supreme Court by the Second Usurper in Chief, Barack Hussein Obama, Jr.  Yikes.

Because Karlan’s cruel faux-witticism fell flat, even with the DNC-sycophantic media, she was forced to issue a quasi-apology  which was reminiscent of all similar “post-damage” apologies coughed up by leftists: “If I offended anyone with my remarks, I regret that.”  That is not an apology.  Instead, it is a transparently synthetic excuse and substitute for issuing a sincere apology.  When a leftist is saying “I’m sorry,” he/she is actually saying: “No, I’m not.  I just regret getting called on it.”

Memo to Karlan and her testimonial enabler, Rep. Sheila Jackson Lee: there is another homophone relevant to this discussion.  That homophone describes the landscape of your respective consciences and senses of decency: barren.

Of Barron; Barons; and Barren added on Thursday, December 5, 2019

One Response to "Of Barron; Barons; and Barren"