WHY WOULD BIG TECH CENSOR DISCUSSION OF CONSTITUTIONAL REQUIREMENTS FOR ELECTED OFFICE? 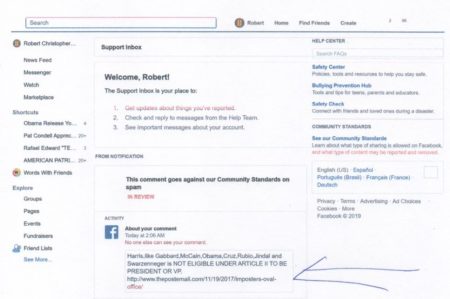 (Dec. 5, 2019) — On Thursday morning, reader Robert Laity notified The Post & Email that a comment he wrote on Facebook about presidential eligibility was rejected because, allegedly, it “goes against our Community Standards for hate speech.”

The comment reads, referring to former and current presidential candidates, “Harris, like Gabbard, McCain, Obama, Cruz, Rubio, Jindal and Swarzenegger [sic] is NOT ELIGIBLE UNDER ARTICLE II TO BE PRESIDENT OR VP.”

He then included a link to an article published at The Post & Email on November 19, 2017, containing an initial section of Laity’s book, “Imposters in the Oval Office,” available for purchase here.

Laity sent us a screenshot of his Facebook admin panel showing that once submitted, his comment was deemed to be “in review.”

While not invoking the term specifically, Laity was referring to the “natural born Citizen” clause of Article II, Section 1, clause 5 of the U.S. Constitution reserved by the Founders only for the president and commander-in-chief.  The complete wording reads:

Frequently over the years at The Post & Email and in his book, Laity has made the case that in his view, anyone not born in the United States to two U.S.-citizen parents is not a “natural born Citizen.”

The 12th Amendment, ratified in 1804, requires that the vice president meet the same qualifications as those of the president. “…But no person constitutionally ineligible to the office of President shall be eligible to that of Vice-President of the United States,” it states.

The pertinent section of the Facebook panel Laity forwarded to The Post & Email reads (sections are not precisely aligned due to the panel having been divided into two screenshots): 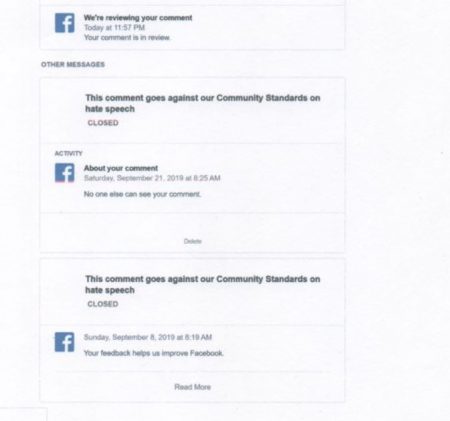 Editor’s Note:  At 6:12 p.m. EDT on Thursday, the article was reposted on The Post & Email’s Facebook page.