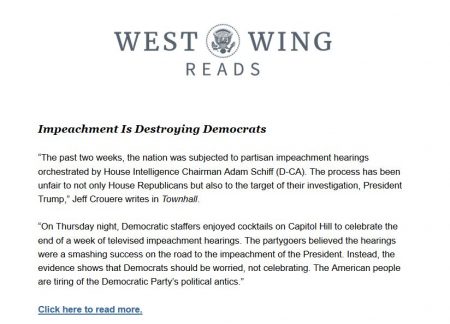 (Nov. 26, 2019) — Monday’s daily White House newsletter, titled “West Wing Reads,” features a column written by Jeff Crouere of Ringside Politics, who is a regular columnist at The Post & Email and other outlets.

The newsletter, which is published Monday through Friday, cited Crouere’s recently-published column titled, “Impeachment is Destroying Democrats” with a link to its place at Townhall.com.

In his article, published Saturday at The Post & Email, Crouere summarized the recent “impeachment inquiry” proceedings as “partisan impeachment hearings orchestrated by House Intelligence Chairman Adam Schiff (D-CA). The process has been unfair to not only House Republicans, but also to the target of their investigation, President Trump.”

In addition to email distribution, the newsletter appears on the White House website and features a wide variety of writers from sources such as the Associated Press, Reuters, The Wall Street Journal, The Washington Examiner, and other mainstream outlets.

Crouere is author of “America’s Last Chance” and has hosted a radio show, Ringside Politics, at WGSO weekday mornings from 7:00 to 11:00 a.m. CT, since 1999.  The show is also broadcast in television format on New Orleans’s WLAE-TV.

His shows are subtitled, “Politics with a Punch.”