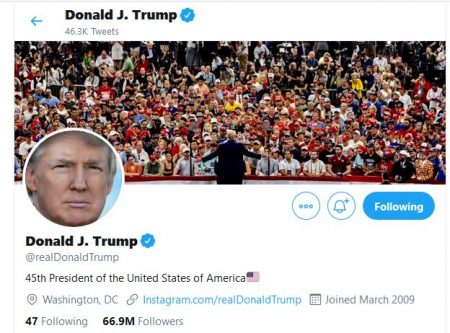 As of 8:27, Carlson had spoken about Ambassador to the EU Gordon Sondland’s testimony Wednesday. He also briefly interviewed Tom Fitton, President of Judicial Watch, about the “Deep State” and former FBI Deputy Director Andrew McCabe’s claim made on CNN today that it does not exist, then segued into a discussion of the “Washington establishment” and its reported view of Russian relations.

As of 8:35 p.m., Carlson led off a segment titled, “Climate Change Insanity.”  At that time, the only additional tweet in Trump’s Twitter timeline cites a poll reported at The Hill that “Trump leads top 2020 Democrats in Wisconsin.” 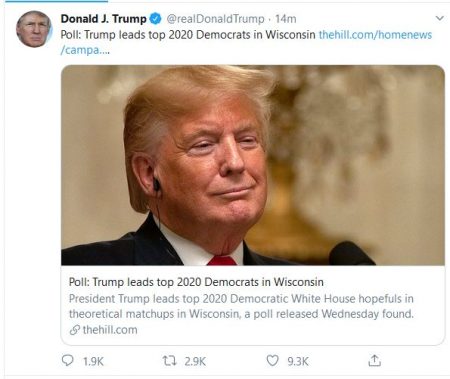 At 8:38, Carlson stated that following a break, he would speak about the convictions last week of former Trump informal adviser Roger Stone.

Returning at 8:43, Carlson reported that the FBI “tipped off” CNN, which had a camera crew and reporter at Stone’s home in Florida when more than two dozen FBI agents surrounded it and arrested Stone at gunpoint for allegedly lying to Congress during its “Russia collusion” investigation.

“Nothing came from Graham’s letter to the FBI,” Carlson declared, after recounting that Sen. Lindsey Graham had written a letter to the FBI requesting “more information” about how the media knew to arrive at Stone’s home before daybreak last January.

Carlson clearly faulted Graham for failing to follow up, including him in a larger group of ineffectual Washington politicians.

Update, 9:14 p.m.:  On “Hannity,” which began at 9:00 p.m., the Fox News chyron stated that Graham will be announcing new information on former Vice President Joe Biden and his son Hunter’s relationship with Ukraine, which is at the center of the impeachment inquiry on the claim that Trump attempted to coerce Ukrainian President Volodymyr Zelenskiy to launch investigations into “the Bidens.”  Hannity introduced the segment by referencing a Ukraine timeline published by journalist John Solomon earlier Wednesday.