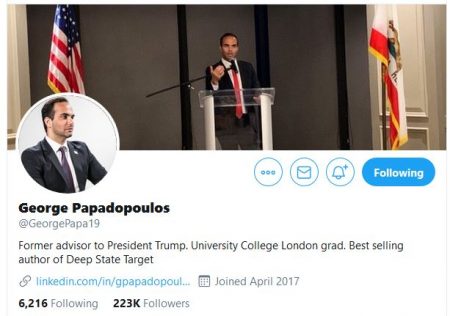 (Nov. 14, 2019) — In a brief interview on “Fox & Friends” Thursday morning, former Trump campaign foreign-policy advisor George Papadopoulos indicated that reports claiming that a much-anticipated report from the DOJ’s Office of the Inspector General will be made public on Monday, November 18 emanate from U.S. Attorney General William Barr.

Papadopoulos’s interview was conducted by co-host Steve Doocy against the backdrop of the first “impeachment inquiry” hearing Wednesday held by the House Intelligence Committee.  In response to Doocy’s questioning, Papdopoulos said he believes the impeachment matter has “distracted” the American people from “the imminent release, according to William Barr, is where I think all the attention should be on.  This has been an investigation ongoing for over a year; it’s looking into corruption within the higher, upper echelons of the FBI and Department of Justice, and that’s really what our attention should be focused on right now.”

In October 2017, Papadopoulos accepted a plea agreement with the Justice Department on one count of lying to the FBI about his contacts with Maltese Professor Joseph Mifsud in 2016. However, Papadopoulos has more recently said, along with a number of congressmen and former Congressman Trey Gowdy, that “recordings” containing exculpatory information as to his case exist and were never provided to the DOJ nor his defense attorneys.

Papadopoulos is one of a handful of former Trump campaign aides say they were approached by mysterious figures, some with offers of assistance to the campaign, which ultimately compelled them in most cases to provide hours of testimony to Special Council Robert Mueller’s prosecutorial team.

The transcripts of Papadopoulos’s close-door interviews with members of the House Judiciary and Oversight Committees last fall have been made public.

On Monday, “Hannity” host Sean Hannity said the IG report would be released “in one week.”

The Office of the Inspector General (OIG) reports to the Justice Department and is tasked with identifying waste, fraud, abuse and corruption within the agency and its subsidiaries. Some in Congress have predicted that the upcoming report will confirm gross misconduct among the leadership of the DOJ, FBI, and possibly the U.S. intelligence community.

Separately, Barr has tasked U.S. Attorney for the District of Connecticut John Durham to investigate the origins of the “Russia collusion” probe led by Mueller predicated on the FBI’s claim that someone within the Trump campaign was coordinating with Russian agents to affect the outcome of the 2016 presidential election.