“REPUGNANT TO THE U.S. CONSTITUTION” 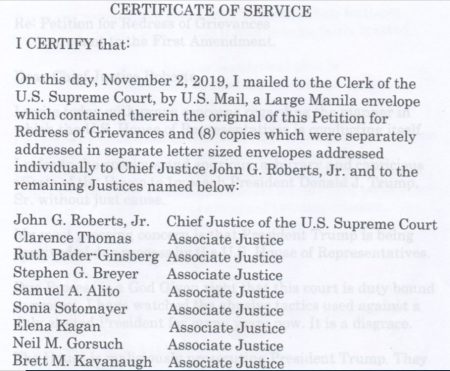 (Nov. 2, 2019) — On Saturday morning, New York State citizen Robert Laity dispatched a set of nine letters, each directed to a member of the U.S. Supreme Court, described as a “Petition for Redress of Grievances” as outlined in the First Amendment of the Bill of Rights.

Laity states his grievance as “grave concerns regarding the manner in which the U.S. House of Representatives is conducting itself.”

“I refer to the specious and spurious, arbitrary and capricious efforts of the House to Impeach President Donald J. Trump, Sr. without just cause,” Laity wrote. “My most pressing concern is that President Trump is being deprived of due process by the U.S. House of Representatives” regarding its “impeachment inquiry” announced by the Speaker on September 24.

At the bottom of page 1, Laity addressed the court’s chief justice specifically when he wrote, “You, Chief Justice Roberts, cannot in good conscience participate in any impeachment process that is being conducted in a manner and under such House that are overtly ‘Repugnant to the U. S. Constitution’ and not in keeping with rights guaranteed by the Bill of Rights.”

Quoting Article II, Section 4 of the Constitution, the website of the U.S. House of Representatives “History, Art & Archives” states that, “The Constitution gives the House of Representatives the sole power to impeach an official, and it makes the Senate the sole court for impeachment trials. The power of impeachment is limited to removal from office but also provides for a removed officer to be disqualified from holding future office. Fines and potential jail time for crimes committed while in office are left to civil courts.”

The website further states, “The House brings impeachment charges against federal officials as part of its oversight and investigatory responsibilities. Individual Members of the House can introduce impeachment resolutions like ordinary bills, or the House could initiate proceedings by passing a resolution authorizing an inquiry. The Committee on the Judiciary ordinarily has jurisdiction over impeachments, but special committees investigated charges before the Judiciary Committee was created in 1813. The committee then chooses whether to pursue articles of impeachment against the accused official and report them to the full House. If the articles are adopted (by simple majority vote), the House appoints Members by resolution to manage the ensuing Senate trial on its behalf. These managers act as prosecutors in the Senate and are usually members of the Judiciary Committee. The number of managers has varied across impeachment trials but has traditionally been an odd number. The partisan composition of managers has also varied depending on the nature of the impeachment, but the managers, by definition, always support the House’s impeachment action.”

Although various House committees have been conducting their own investigations of the president since they assumed the majority in January this year, Speaker of the House Nancy Pelosi officially designated House Intelligence Committee Chairman Adam Schiff to lead the “impeachment inquiry” she declared on September 24 in the wake of a “whistleblower” complaint claiming that Trump abused his power when speaking on July 25 with Ukrainian President Volodymyr Zelenskiy.

Schiff quickly announced that the whistleblower would be testifying to Congress as soon as that week, but after The New York Times reported that his staff, if not he himself, had been in communication with the complainant prior to his August 12 letter becoming public, Schiff said the individual’s testimony “might not be needed” after all and to ensure his or her “safety.”

On Thursday morning, the House voted to continue the “impeachment inquiry” through a resolution setting forth certain parameters going forward, including that Schiff would hold public hearings as opposed to those he has been conducting in a secure area of the US Capitol over the last five weeks.

The resolution was approved 232-196, with an Independent voting with the Democrats and two Democrats voting against the measure with the Republicans.

According to Article I, Section 5, clause 2 of the Constitution, members of Congress can be “expelled” but not impeached.

Some Republicans have claimed that Schiff has coached certain witnesses and disallowed their responses to some of their questions. While barred from divulging the witnesses’ closed-door statements, Republicans claim that Democrats, including Schiff, are leaking selected parts of the testimonies which they believe support their case against the president.

In what could be considered eerily reminiscent of the Russia “collusion” narrative, declared to be unfounded by a 22-month, $30-million Special Counsel investigation, Politico reported on October 13:

House Democrats are entering week four of their impeachment inquiry as they investigate efforts by Trump and his allies to pressure Ukrainian officials to investigate former Vice President Joe Biden, a political rival, and his son Hunter to help Trump’s reelection. At the heart of the investigation is whether Trump withheld military aid and a much sought after White House meeting requested by the newly elected Zelensky in a bid to force Ukraine to investigate the Biden family.

No mention of the 2020 election is included in the transcript released by the White House.

Republicans also claim they have been told not to discuss anything said behind closed doors, and mainstream media sources do not say how they acquired details as to the various testimonies taking place over the last several weeks.

Thus far, to this writer’s knowledge, no Republican has been accused of leaking testimonial statements to the press.

Trump has claimed the call was “perfect” and that no “quid pro quo” was offered to Zelenskiy in response to the whistleblower’s claims, which were admittedly based on second-hand information.  On the afternoon of September 24, following Pelosi’s declaration of the “inquiry,” the White House took the unusual step of releasing the transcript of the call, reportedly after Zelenskiy offered no objection. The transcript consists of notes and recollections compiled by approximately a half-dozen listeners in the White House Situation Room, according to its heading.

On Wednesday, CBS News reported that Tuesday’s closed-door testimony of Lt. Col. Alexander Vindman, the “top Ukraine expert” on the National Security Council who was reportedly born in Ukraine, was “dam*ing” to Trump.  Much fanfare was made about Vindman’s testimony before it took place, which reportedly included Vindman’s unsuccessful attempt to include additional information in the transcript.

Vindman reportedly had “concerns” about the content of the call.  Former White House aide and NSC member Tim Morrison, a political appointee who listened to the phone call, said on Thursday that he “was not concerned that anything illegal was discussed.”

An Associated Press article arguably presents a distorted view of Morrison’s prepared statement and inaccurately states that Morrison “stepped down from the National Security Council the day before his Thursday testimony.” 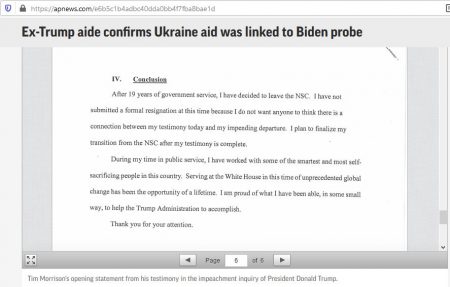 “A former top White House official confirmed that military aid to Ukraine was held up by President Donald Trump’s demand for the ally to investigate Democrats and Joe Biden,” the AP opened its article, yet Morrison’s prepared statement does not contain a reference to “Joe Biden” nor to “Democrats.”

In his remarks, Morrison wrote that “The NSC staff does not make policy.  NSC staff are most effective when we are neutral arbiters, helping the relevant Executive Branch agencies develop options for the President and implement his direction.”

Laity’s letter to the Supreme Court and Certificate of Service are below.

3 Responses to "Citizen Directs “Petition for Redress of Grievances” to U.S. Supreme Court"