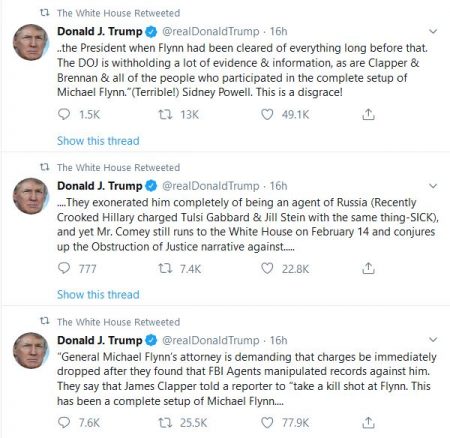 In December 2017, Flynn accepted a “guilty” plea on one count of lying to the FBI, but Powell claimed in a new court filing Friday that the “302,” or interview summary, of his conversation with FBI agents Joe Pientka and Peter Strzok was altered by then-FBI counsel to the deputy director Lisa Page.

Powell, a former federal prosecutor herself, is demanding that the government withdraw its prosecution of Flynn, despite his already-entered plea nearly three years ago.

In what appears to be a combination of quotes from others as well as his own commentary, Trump wrote, “General Michael Flynn’s attorney is demanding that charges be immediately dropped after they found that FBI Agents manipulated records against him…” and “They exonerated him completely of being an agent of Russia (Recently Crooked Hillary charged Tulsi Gabbard & Jill Stein with the same thing-SICK), and yet Mr. Comey still runs to the White House on February 14 and conjures up the Obstruction of Justice Narrative against….the President when Flynn had been cleared of everything long before that…”

In a tweet from approximately the same time frame, Trump wrote to the anchors on the Fox News Channel’s “Fox & Friends,” “Thank you, @foxandfriends!  Hopefully this is just the beginning of a massive story of injustice and treason.  You will never learn this from the corrupt LameStream Media who get Pulitzer Prizes for reporting the story totally wrong…”

Trump did not clarify the narrative to which he was referring, although another tweet in the same time frame quoted host Tucker Carlson speaking about the Russia “collusion” investigation, which Trump has always called a “witch hunt.”  “Not a single American citizen has been charged with anything related to Russian Collusion, not one person,” Trump appears to have quoted Carlson as having said.

The 22-month investigation concluded in March with the finding that no Americans conspired with the Kremlin to alter the outcome of the 2016 presidential election.

On Friday, Carlson’s show was guest-hosted by Mark Steyn.

Other tweets Trump issued on Saturday concerned the “Ukraine” investigation in which House Democrats have called for his impeachment; the city of San Francisco’s growing homelessness and drug-use problems wherein Trump faulted Speaker of the House Nancy Pelosi for neglecting her own district; the opioid crisis and Saturday as an official drug-disposal day across the country; and the sole question, “Where’s the whistleblower?” whose report appears to have served as the catalyst for the impeachment effort.

It was Chad Pergram of Fox News who tweeted that Trump will make “a major statement” at 9:00 a.m. Sunday.