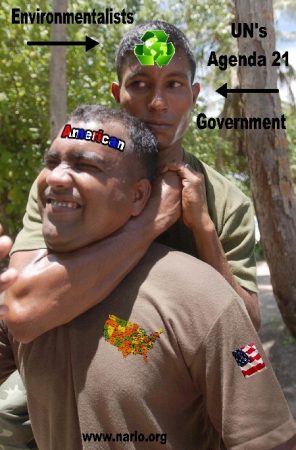 Here is an example.  In two university studies it was shown that environmental regulations have added an estimated average of $200,000 for every single-family home built in America.  It is less in some areas but greater in others.  Who pays for this added cost, the homeowner in higher mortgages and in higher monthly payments?  The cost also shows up in inflation.

Environmentalism has taken on the character of an infectious disease on a global scale.  The disease is spread throughout our institutions of government, including public schools and colleges, along with corporate America, as an urgent crisis that requires instant, very expensive solutions.  Of course we must all be willing to sacrifice in the name of environmentalism.  That sacrifice requires giving up our constitutional rights, a comfortable lifestyle and paying usurious and confiscatory taxes.

Under the disease of radical environmentalism, one of the rights that Americans must give up is our constitutional and sacred right to own property.  Environmentalism led to central planning.  Private ownership of land is an obstacle to central planning and globalism.  Under a United Nations policy established at a humans settlement conference in Vancouver, BC, Canada in 1976 they state:

This should make every American’s blood boil!

Remember, the United Nations was started in 1945 to be the entity that would stop all wars.  It has failed in its original objective but instead grown into a quasi-government, socialist organization attempting to change the world into its concept of social and environmental justice.  It (Intergovernmental Panel on Climate Change [IPCC]) is behind the move to dupe the world into believing that man-caused global warming is an existential threat to the planet and humanity and must be addressed immediately by draconian regulations and massive amounts of cash being transferred from wealthy countries to poor countries by government edict.  Americans get to pay the lion’s share of that cash transfer of wealth.  Americans are more guilty than other people.

However, the Chinese and Indians of India get off scot-free because they are trying to grow into the 21st century by increasing carbon-dioxide-polluting forms of power generation from coal.  The third-world countries get to take in the cash from wealthy Western nations, but their requirement to reduce their carbon dioxide emissions is voluntary.  In America CO2-emission reductions are mandated by law using onerous taxation.  The upshot of this policy is to give over 180 third-world nations the political power, through the United Nations, to dictate to the wealthy nations.

All of this is driven by the international religious cult of radical environmentalism, which is being shoved down every American’s throat by propaganda, hype, distortions, and outright lies.

Environmental protection now supersedes any vestige of constitutional property rights.  Urban dwellers are under the scourge of Agenda 21, smart growth and sustainable development, while their rural cousins are being forced to bear almost the entire burden of environmental protection.  Private land is being condemned under eminent domain for wildlife corridors, using the power, wealth and political influence of environmental groups like The Nature Conservancy, the Natural Resources Defense Council, the Center for Biological Diversity, the Environmental Defense Fund, Friends of Earth, Earth First, Greenpeace, etc. which receive millions of taxpayer dollars to buy up private land, either directly, or by control through conservation easements.  In many cases these environmental groups use taxpayer money to sue the government over environmental issues.  They have become filthy rich doing so.

City dwellers have been brainwashed (public schools) into believing that environmental protection is sacrosanct and has a higher priority in law than property rights.  Those same city folk elect politicians who believe as they do.

But the most insane chokehold that environmentalism is perpetrating on Americans today is the flawed policy (Green New Deal) of eliminating fossil fuels as our source of power.  Fossil fuels are directly responsible for building our free culture, energy, infrastructure, transportation, plastics, nylon, rayon, steel, roads, bridges, buildings, products, commodities and the undefeatable military that America and Americans enjoy today.  Without fossil fuels Americans would be living in the lifestyle of the pioneer days.  Without America’s powerful military, America could very well be part of China or Russia.

Insanely, socialist Democrats and radical environmentalists want to take away our fossil fuels and replace them with wind and solar power.  They want to do away with nuclear power because it might be dangerous, and yet 80% of France’s energy comes from nuclear power.

Indians and environmentalists want to remove dams from rivers that provide electricity, irrigation and flood control so that American Indians can fish the rivers unobstructed by dams.  Some 1855 treaty gave the Indians almost total fishing rights through the Boldt decision (1974) for salmon, and because of that ancient treaty, American civilians, urban and rural, are being forced to pay for salmon habitat restoration to the tune of billions of dollars so that a few Indians can fish.

Washington State governor Jay Inslee has put in the bi-annual budget over $1 billion to save 73 orcas in Puget Sound.  That’s $13,700,000 per Orca.  Orcas eat salmon, so we must spend billions to restore habitat to enhance fish runs so that the Indians and Orcas can fish for and eat their daily supply of salmon.  Kill the Orcas and the salmon would come back by the tens of millions.  When are the Indians going to join the 21st century and come out of the dark ages of their aborigine lifestyle?

Environmentalists want to save every wetland in America, no matter how small, or how much it costs, or how many rights they take away from landowners, and yet one-third of the earth’s surface was covered in ice just 11,000 years ago.  There were no wetlands under all that ice.

Most of this environmental insanity is based on two flawed beliefs:

That human activity is having an effect on the planet is not in dispute.  The question is, will man destroy the planet with human activity?  The answer is no.  The earth is self-healing.  If humans went extinct (a distinct possibility), the planet would heal itself in less than 1,000 years.  One thousand years is shorter than a blink of an eye as compared to the billions of years that the earth has existed.  Farmers and ranchers in the Amazon are faced with trees and plants reclaiming the cleared areas so fast as to make farming and ranching very difficult.

Is it a fact that man’s contribution to CO2 in the atmosphere is causing global warming?  Here are the facts!

There seems to be ample evidence that the climate is warming.  The pole ice caps seem to be shrinking and land glaciers are retreating.  Allegedly, sea levels are rising.  But those who can prove beyond a shadow of a doubt and with absolute certainty that man is causing these events are living in a deep mine where the sun doesn’t shine, or they have been brainwashed by evil forces.

“It is the greatest scam in history. I am amazed, appalled and highly offended by it.  Global Warming (climate change) is a scam.  Some dastardly scientists, with environmental and political motives, manipulated long term scientific data to create an illusion of rapid global warming.” — John Coleman, TV Weatherman

People will believe anything if it is told to them often enough.  Hitler knew that and used it to get the entire German population believing that they were the chosen race and superior to all other races and therefore they must conquer the rest of the world by force and become rulers of the world.

Today, using the same Hitler tactics, national and international global forces (globalism) are doing everything in their power to brainwash an entire human species into believing that they are guilty of harming the planet so badly that they must bow down to the God of Green and the United Nations and prostrate themselves before the environmentalists and government.  The masses must sacrifice all worldly pleasures and tax themselves into oblivion to save the planet, especially Americans ….. because Americans are guilty of a great sin and must pay for their sins!

The human species isn’t getting any smarter, much less wiser.  It is getting dumber!  The human species is losing its ability to think critically and logically.  It has lost any semblance of common sense and willingly capitulates to tyrannical authority.  The human species is on its way to becoming planet-wide slaves of an arrogant ruling class that has sent individual freedom to the scrap heap.  The “Environmentalist Ruling Class Has Every American In A Chokehold.”

Ron Ewart is a nationally known author and speaker on freedom and property rights issues and author of his weekly column, “In Defense of Rural America.” Ron is the president of the National Association of Rural Landowners (NARLO) (www.narlo.org), a non-profit corporation headquartered in Washington State, acting as an advocate and consultant for urban and rural landowners.  Ron can be reached for comment HERE.

Environmentalists Have Every American In A Chokehold added on Saturday, October 26, 2019