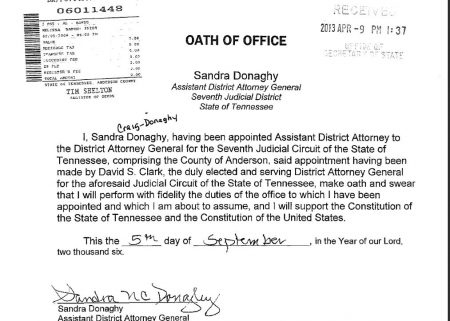 (Oct. 24, 2019) — The Post & Email has discovered that numerous past and current public officials in Tennessee have signed their names to official documents in different ways, with the handwriting appearing to vary in some cases.

The oath of office for all “constitutional officers” and other officials, some of which date back to the late 1990s, can be found at the Tennessee Secretary of State’s website in a searchable format.

In the case of Tenth Judicial District Chancellor Jerri S. Bryant, Bryant apparently signed her name as “Jerri Saunders Bryant” on her oath of office from 1998, but in her 2014 oath, her name is indicated in print as “Jerri S. Bryant,” and the signature does not resemble that of 16 years before.

In Shelby County, Tennessee’s 30th Judicial District, Judge John W. Campbell appears to have signed his 2014 oath of office as “JW Campbell,” even though the printed name below the signature reads, “Judge John Wheeler Campbell.”

In March 2009, 15th Judicial District criminal court judge David E. Durham is denoted on his oath of office as “David Earl Durham,” with a non-matching and illegible signature.   An oath of office dated three months later bears the name, “David E. Durham” and appears to bear a different signature from that which was signed earlier that year.

Judge “Chris Craft,” a former assistant district attorney general in Shelby County, signed his 1994 oath of office for his judicial appointment as “Christopher Bright Craft.”  Twenty years later, however, Craft was known as “Christopher B. Craft.”

Rolf Hazlehurst (as he signed his oath of office in 2014)
https://oaths.tnsos.net/api/oaths/1635/pdf
https://www.tncourts.gov/sites/default/files/greenejopn.pdf

An appellate court opinion available at the TAOC website notes him as “Rolf S. Hazlehurst.”

However, in federal court documents, he is noted consistently as “Rolf Hazlehurst.”  The transcript of a January 2019 interview between Hazlehurst and investigative journalist Sharyl Attkisson spells his name identically.

Returning to the Tenth Judicial District, Criminal Court Judge Sandra Donaghy signed her 2014 oath of office as “Sandra N C Donaghy,” although she is designated as “Sandra N. Donaghy.” She did the same when she served as Deputy District Attorney General in the Seventh Judicial District prior to becoming a judge, although her name at the top of her 2013 oath of office identifies her as simply “Sandra Donaghy.”

In the actual oath statement, however, above “Sandra Donaghy” is handwritten, “Craig-Donaghy.”

The secretary of state’s office acknowledges Donaghy as having signed three oaths of office and identifies her by two different names, hence The Post & Email’s discovery of her significant name variants.

Emails sent to the secretary of state and Tennessee attorney general’s respective media contacts on Wednesday and Thursday inquiring as to the apparent use of aliases on government documents received no response as of press time.

Why Do Tennessee Public Officials Have Aliases? added on Thursday, October 24, 2019

One Response to "Why Do Tennessee Public Officials Have Aliases?"