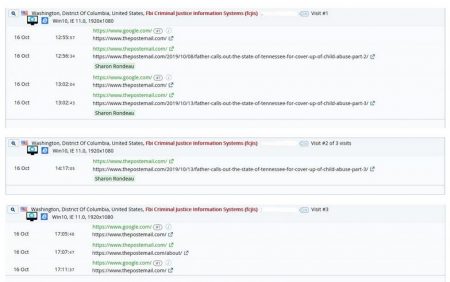 (Oct. 17, 2019) — On September 23, 2019, the father of four Jackson, TN children he believes are being abused by their mother and stepfather was told by Sgt. TJ King of the Madison County Sheriff’s Office (MCSO) that “both investigations” the MCSO allegedly opened into the matter “are active.”

On August 5, 2019, the father and his fiancée went in person to the MCSO to file a report of suspected physical and sexual abuse of the children in their mother and stepfather’s home, where the children now reside 100% of the time.  A subsequent report the father filed on August 26, 2019 was for “parental kidnapping” on the part of his children’s mother after he discovered the children to be out-of-state without his knowledge or consent, as is stipulated in their 2014 divorce decree.

King did not elaborate on the progress of either alleged investigation.  After receiving King’s affirmation that the cases were “active,” the father requested specifics such as reference numbers and the MCSO contact person for each case.  He received no response.

On Monday, October 7, the father emailed King with, “Second notice – requesting ALL report and case numbers, specific identification data I.e. report numbers and case numbers to include all specific supplements to each and every report and case by specific data for report, case, and supplement of ANY and ALL reports,cases and supplements my name is attached – to include all spellings of my last name…Last names used by MCSO noted previously to assist with pulling all other false entries of my last name.”

As The Post & Email reported in previous installments of this series, the father and his fiancée discovered that MCSO personnel and the office of the district attorney general, the county’s chief prosecutor, frequently generate documents in which variants of public officials’ names appear.  Against that backdrop, the father suspects that it is not a coincidence that in the case of his children, his and their last name has been spelled incorrectly within the MCSO’s system as well as in a report generated by the Department of Children’s Services (DCS) on August 6 as a result of his having contacted the agency’s hotline.

In mid-August, the children’s mother and stepfather filed protective orders against the father both on their own accounts and on behalf of the children, although the father was not apprehended by law enforcement nor arrested for misconduct or an alleged crime.  The father and his fiancée believe that the protective orders were issued illegally due to the fact that they lack a notary’s official stamp and appear to have the handwriting of more than one individual on them, possibly indicating that the applicants themselves did not complete the forms as Circuit Court Clerk Kathy Blount has asserted in a recorded call they must.

In addition to erroneous spellings of his last name and that of the children, the father and his fiancée have described stonewalling, lack of response, and broken pledges on the part of DCS, the local school system, and Crystal Jones, the assigned social worker.

According to the school principal, Jones visited two of the children at their school on August 14 and September 6, respectively, but Jones told the father she visited all three children at one point.  Neither Jones’s supervisor, Ms. Golden, nor her supervisor, Roger Webster, nor the Tennessee Commission on Children and Youth (TCCY) Office of the Ombudsman has provided the father information on the status of his children or requested an interview with his fiancée or him.

On the morning of September 4, the day the Circuit Court was scheduled to hold a hearing on the protective orders, a warrant for the father’s arrest was issued on the grounds that he violated the protective order by driving by an area where the children’s was reportedly present the day before.  The report was made by an employee of a local business who, along with the children’s mother, reported his having driven past the business the latter was patronizing.

The father has proof that he was out of town on September 4 and maintains that the report was made falsely and maliciously.  On Friday, he contacted the woman at the private business whose name appeared with that of the children’s mother on the report that he drove past the business where the children’s mother was on September 3.  The phone call reveals the father calling the woman at the business and almost immediately reaching her.

As she listened in silence for more than five minutes, the father quietly told her, “I was the individual that you identified – supposedly identified – on September 3rd driving by 112 North Liberty, and I wanted to share with you…my car was not in Jackson, Tennessee, and it’s proven that it wasn’t.  I was nowhere near Jackson, Tennessee on the day that I think it was you that had referenced seeing me driving by in my vehicle and identified me by a picture, and I’m reaching out to  you because I believe that some individuals that are trying to push forward an agenda, and they’ve done this by defrauding courts and deputies and district attorneys, etc., have put you smack-dab in the middle of this situation.  I’m not sure how or why you got involved in this situation, but I wanted to give you the information that eventually, whether it be in the next few days or the next few weeks, everything that was basically lied about is going to come to light with some very hard, specific documentation and evidence.  I wanted to reach out to you; I don’t know you; I’ve never met you; I never had a conversation with you, and I’m not sure why you were brought into this situation, but I wanted to provide that information to you…”

The woman then spoke for the first time: “Well, no one has contacted me about anything. I don’t know; I guess maybe you saw something and called up here to talk to me, but nobody has reached out to me about anything.  I don’t know — If the cops call me or want me to say whatever it was that I said, then that’s fine.  But otherwise, I’m not involved in it at all.  I understand that you’re like — irritated or whatever –“

“OK, then have your attorney or the district attorney or somebody give me a call,” she answered.

“Ms. L——, when it reaches that point, I’m just sharing with you you have my cell phone number, XXX-XXX-XXXX –”

“I got your number; I have your message.”

“OK.  If you would like to talk, I’m more than open to speak with you about what happened.  I’m genuinely coming to you, ma’am, as somebody that’s trying to avoid you getting caught up in all this…”

Also on Friday, the father spoke with DCS worker Crystal Jones, who informed him after placing him on hold for more than five minutes that the agency’s investigation into his reports of abuse was “closed” without any elaboration.  When he asked when it was closed, Jones said, “I cannot.”

When he said he had questions, including, “What were the findings?” Jones said she could not reveal that information.  The father then asked to speak with “a manager,” and Jones hung up.

On Wednesday afternoon, the FBI Criminal Justice Information Systems (CJIS) visited The Post & Email three times, the first two of which were to access Parts 2 and 3 of this series.  On the last visit, the user accessed our “About” page.  We have redacted the user’s IP number, which was identical in all three visits.

Father Calls Out the State of Tennessee for “Cover-Up” of Child Abuse, Part 4 added on Thursday, October 17, 2019