WHAT ARE THE PRESIDENT’S “CONSTITUTIONAL RIGHTS?”

(Oct. 16, 2019) — In an article published Tuesday at the Independent Sentinel, a tweet by radio host and author Dan Bongino was featured which equated the U.S. House of Representatives’ “impeachment inquiry” of President Donald Trump to the activity of a grand jury, as had Prof. Victor Williams in an interview with The Post & Email published September 30.

Speaker of the House Nancy Pelosi claims she is not required to hold a full House vote on Articles of Impeachment, as has been done when “high crimes and misdemeanors” by the president were under consideration.  On Tuesday night, Pelosi reiterated she would not hold a full vote in the lower chamber of Congress at this time.

An October 13 column on the issue by the USA Editorial Board states as to a full chamber vote and what might come afterward:

There is also precedent for allowing some semblance of due process during impeachment proceedings, although it would do well for the public to remember that impeachment is akin to a grand jury process. If and when articles are drawn up and approved by the House — tantamount to bringing charges — Trump would be entitled to such full due process rights as cross-examination of witnesses and presentation of defense evidence during a subsequent trial in the Senate. 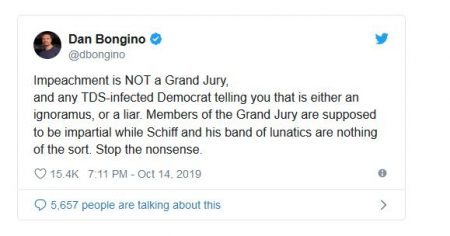 The Independent Sentinel article by Sara Noble contains opinion and cites not only Bongino’s observation, but also that of Fox News Capitol Hill producer Chad Pergram relative to the evolving nature of the impeachment hearings being conducted by House Democrats.

“Closed door interviews for impeachment probe are now considered depositions,” Pergram tweeted early Tuesday afternoon, referring to private meetings House Democrats are conducting as part of their “inquiry.”  “More restrictions surrounding the material, like an interview. Depositions limit 1 attorney to asking questions per round. If cmtes issue subpoenas, it moved from a transcribed interview to a deposition,” Pergram’s tweet concludes.

Transcripts of the interviews have not yet been made public, and Rep. Jim Jordan (R-OH4) on Tuesday night’s “Hannity” claimed Republicans have not been afforded an opportunity to review them.

The White House has refused to cooperate with House Democrats’ demands for documents and interviews/depositions on the basis that the House has not voted on Articles of Impeachment, as has occurred in the past when “high crimes and misdemeanors” on the part of the chief executive were under consideration.

A bit later on Tuesday, Pergram tweeted, as reported at the IS, “From colleague Caroline McKee. McCarthy leaving secure area where Hse is conducting depositions. McCarthy: ‘I’m concerned that I just listened to, Congressman Rose, and you’ve got to prove your innocence? That’s not enough.'”

In his September 30 interview with this writer, Williams, who in 2016 challenged the constitutional eligibility of then-presidential candidate Ted Cruz, told us, “For the last 20 years, my thesis has been that when the House decides and votes to undertake an impeachment inquiry, they have significantly transformed themselves from a legislative body into a constitutional grand jury.  A grand jury is a judicial concept.  So when they start to look at Mr. Trump, after they’ve transformed themselves, it is not a legislative process; it is a judicial process and a bill of attainder.  If it were a valid process, perhaps it would not apply because the bill of attainder says, ‘legislative punishment.’  What’s unique about the prohibition against a bill of attainder is that you’re not only protecting individuals from punishment; you’re not only protecting their due process rights, but also reinforcing the separation of powers between coordinate branches.”

On Friday, a three-judge panel of the U.S. Court of Appeals for the District of Columbia upheld a House-issued subpoena for eight years of Trump’s financial records held by Mazars USA, LLP when he led The Trump Organization, a multi-billion-dollar worldwide real-estate enterprise now steered by Trump’s two eldest sons, Eric and Donald Jr.

The two majority judges agreed with the House Oversight Committee’s claim that it must obtain the documents to determine whether or not Trump has “committed crimes” while in office associated with his former business dealings.

The dissenting opinion issued by Trump-appointed Judge Neomi Rao describes the House’s current impeachment actions as a “lawless effort to insert the judiciary into the House of Representatives’ investigations into Trump, limiting lawmakers’ ability to access potentially incriminating evidence,” according to left-leaning Slate.  “‘The Constitution and our historical practice draw a consistent line between the legislative and judicial powers of Congress. The majority crosses this boundary for the first time by upholding this subpoena investigating the illegal conduct of the President under the legislative power,’ Rao wrote,” as reported by The Boston Globe.

On Wednesday morning, P&E reader Robert Laity reported that he attempted to leave a comment to the IS article which was rejected as spam, an audio version of which is below.

Early Wednesday morning, Laity contacted Noble about the comment, stating, “Attached is a recording of the comment I made in response to the below article and that your site rejected as spam” with the audio file, which states that currently the House of Representatives is “depriving President Trump of his due process rights under the Constitution.”

The recording is titled, “What is a deposition?” 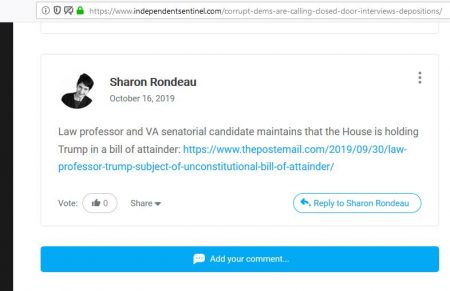 While this article was still in preparation, Laity emailed this writer to report that, “The owner of this site put my recorded explanation of ‘what is a deposition’ on his site. The text would not upload so it was converted to a voice comment by me.”

A refreshed link now contains Laity’s comment in video/audio format along with a comment from the author:  https://www.independentsentinel.com/corrupt-dems-are-calling-closed-door-interviews-depositions/