“WE HAVE TO BE FAIR TO THE PRESIDENT” 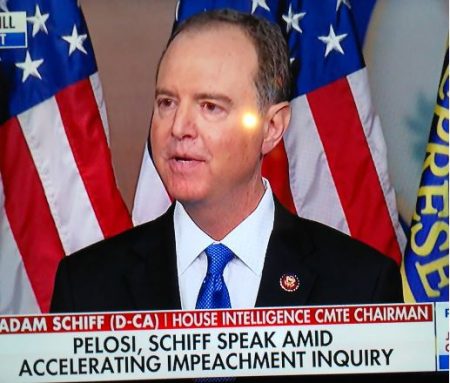 (Oct. 2, 2019) — At 11:07 EDT, Speaker of the House Nancy Pelosi and House Intel Committee Chairman Adam Schiff stepped to a podium on Capitol Hill to address the public on what Pelosi said would be two topics.

The first was HR 3, a proposal to “reduce the cost of prescription drugs.”  Pelosi said that if the bill is passed, it would allow for broader “negotiation” with pharmaceutical companies, among other benefits.

Pelosi observed that the House of Representatives is officially on a break to observe the Jewish high holy days.

She said that the House is discussing the USMCA agreement which President Trump urgently wants Congress to approve.  Despite her announcement Thursday of an “impeachment inquiry.” Pelosi said she “hopes the president” is willing to work with Democrats to pass their agenda on “clean government,” trade agreements, health care, and other priorities.

She said that House Democrats are “legislating, litigating, and investigating” as part of their agenda.

Pelosi commented on “serious repression” in China which people in Hong Kong have been protesting for 18 weeks.

“We are very proud of the work of our chairmen,” Pelosi said against the backdrop of the “impeachment investigation,” which was allegedly spurred by a July 25 phone call between Trump and Ukrainian President Volodymyr Zelenskiy and a “whistleblower complaint” which followed.

She invoked the U.S. Constitution and said that Trump’s actions are “an assault” on it.  She described the present as a “dark time,” comparing it to Thomas Paine’s famous words.

“It’s hard; we want to weigh the equities as we go forward,” Pelosi said, introducing Schiff.  Speaking of events of “the last week,” Schiff said that subpoenas issued to State Department personnel and Trump’s personal attorney, Rudy Giuliani, are expected to be honored or construed as “obstruction.”

Schiff said his and other House committees “have been very busy this week and will be very busy next week.”

At 11:19, Pelosi again assumed the podium.  In response to a reporter’s question, Pelosi said that the impeachment activities “have nothing to do with” Democrats’ agenda items.  She stressed the importance of “upholding the Constitution.”

In 2008, Pelosi signed nomination forms indicating that Barack Hussein Obama II qualified for the presidency, which the Constitution requires must be a “natural born Citizen.”  She has never addressed the findings of a five-year investigation declaring Obama’s “long-form” birth certificate, released in April 2011, and his Selective Service registration form, are forgeries.

Pelosi said that “progress” can be made between negotiators and the White House.  “We’re trying to find common ground with the president,” she said at 11:22.

Responding to another reporter, Pelosi characterized the July 25 phone call with Zelenskiy as “wrong” rather than “perfect,” as Trump has described it.

Returning to the podium, Schiff repeated that any withholding of requested documents by the White House will be viewed as “obstruction” and construed negatively.  In response to Trump’s calls for identification of the whistleblower, Schiff said that the whistleblower deserves anonymity.  He and Pelosi believe that Trump attempted to “coerce” Zelenskiy to assist him in his 2020 re-election bid by relaunching an investigation into former Vice President Joe Biden and his son, Hunter.

Giuliani has alleged that Ukraine closed down an investigation involving Hunter Biden in connection with his then-$50,000/month salary for serving on the Board of Directors of Burisma Holdings, a Ukrainian energy company suspected of corruption.  In January 2018, Joe Biden bragged on camera that he pressured then-Ukrainian president  Poroschenko to fire Viktor Shokin, Ukraine’s then-chief prosecutor.

Shokin has said in a sworn affidavit that his probe of Burisma, and specifically, Hunter Biden, was the reason Poroschenko asked for his resignation, which he proffered.

Pelosi added that “protecting whistleblowers” is “important” and repeated that Trump’s call with Zelenskiy was “wrong,” without elaborating.

She said that Trump presented a “very serious” matter necessitating the impeachment inquiry.  She also claimed that a full vote of the House is not necessary to pursue the “impeachment” investigation.

At 11:32, Schiff regained the microphone and characterized the phone call as undue foreign influence to “intervene in our election” and “help his campaign.”

While Joe Biden is running for the Democrat nomination, the primaries do not begin until January or February.

Schiff recited the claims made by the whistleblower, who said he did not have first-hand information in the lengthy letter made public last week which many suspect was written by attorneys.  “There seems to be no floor below which this president cannot drop,” Schiff said.

“You have to look at the sequencing” of the call, Pelosi added at 11:34, connecting it to the administration’s withdrawal of financial assistance to Ukraine.  She then said that Trump “used it as leverage” and “undermined his oath of office” in the phone call as well as “undermined the integrity of our elections.”

She described Trump as “kicking over the guard rails” placed in the Constitution by the Framers.  “We have to be worthy of the Constitution; we have to be fair to the president,” she said, while admitting that the House’s actions do not constitute an “actual impeachment.”

She said that September 17, Constitution Day, was the day Trump admitted to her what he said to Zelenskiy in the call and that he described it as “perfect” then.

“We have to look at the facts and the Constitution,” Pelosi said, urging the public to “save” other items such as “gun safety” “for the election.”

“With dignity, with respect, prayerfully, and again, worthy of the sacrifice of our Founders,” she said as her last statement before both she and Schiff left the podium.

Trump will hold a presser later on Wednesday, Fox News reported toward the end of Pelosi’s final remarks.