“WE’LL SEE HOW IT PLAYS OUT”

(Sep. 20, 2019) — In the first segment of Thursday night’s “Hannity,” Rep. Jim Jordan (R-OH4) said that former FBI Director James Comey is the “center” of the Trump-Russia “collusion” narrative which launched a 2½-year “saga” dominating headlines during the first half of the Trump presidency.

In the end, a 22-month Special Counsel investigation determined there was insufficient evidence to support the claim that anyone from the Trump campaign conspired with Russian operatives to affect the outcome of the 2016 presidential election.

In May 2017, after Comey was fired, Special Counsel Robert Mueller assumed the FBI’s probe into the Trump campaign, which was based on reported “intelligence” received from the FBI in London.

House Intelligence Committee ranking member Devin Nunes has said that the alleged “intelligence” does not exist.

Early in 2017, Comey met with then-President-Elect Donald Trump at Trump Tower on the premise of briefing him on the existence of the Trump-Russia “dossier” compiled by British citizen Christopher Steele. During the meeting, Comey reportedly advised Trump that the media had acquired the dossier and that it was “salacious and unverified.”

However, at the same time, the dossier was used by the FBI and DOJ as the mainstay of evidence in acquiring four FISA warrants on former Trump adviser Carter Page over the course of a year.  Comey signed three of the four warrant applications affirming under oath that the information had been “verified” by the FBI.

A DOJ inspector general report issued three weeks ago found Comey to have violated FBI and DOJ policies as well as federal law in releasing several of the memos he composed after his meetings with Trump to a team of private attorneys.  Inspector General Michael Horowitz confirmed on Wednesday that he recommended Comey to the Justice Department for criminal prosecution, which at present the DOJ has declined to pursue.

Thus far, Hannity told investigative journalist Sara A. Carter and Jordan, “Comey’s been able to dodge the less than candor, lacking candor, yeah, he did have materials he shouldn’t have had and he passed them on to people to get leaked.  Is he going to be able to dodge the FISA warrant that he was warned about at least three times I know of, likely five times, that he shouldn’t trust, that it wasn’t verified, the dossier, but he still used it to get the FISA warrants?”

“Look, remember, the same referral that Michael Horowitz gave for Jim Comey is the one he gave for Andy McCabe just a year ago,” Jordan responded, “and we know Andy McCabe’s not dodging anything based on what we learned last week and how the Justice Department’s moving forward with him, so we’ll have to see.”

Jordan referred to reports stating that McCabe’s attorneys were in recent negotiations with the Justice Department in an effort to convince officials there to abandon their intent to seek an indictment for McCabe’s “lack of candor,” as stated by Horowitz in a February 2018 report regarding a 2016 leak to The Wall Street Journal about the Clinton Foundation probe.

Mixed messages have emanated from various sources in Washington rumoring that a grand jury declined to indict McCabe or that the grand jury had not yet received the case.

On an appearance on “Fox & Friends” Wednesday morning, Jordan invoked pages 17 and 18 of Horowitz’s report released August 29, 2019 stating that Comey quickly documented the first of what would be his seven “Memos” of his interactions with Trump and shared the information with his inner circle consisting of McCabe, then-FBI General Counsel James Baker, then-Chief of Staff James Rybicki, and “supervisors of the FBI’s Crossfire Hurricane investigative team.”

Following the broadcast, Carter tweeted a photo of Horowitz testifying at Wednesday’s hearing marking the tenth anniversary of the existence of federal-agency inspectors general, during which Jordan asked Horowitz details about his forthcoming report on alleged “FISA abuse.” It is believed by many that the report will reveal that the DOJ and FBI obtained the surveillance warrants “illegally.” 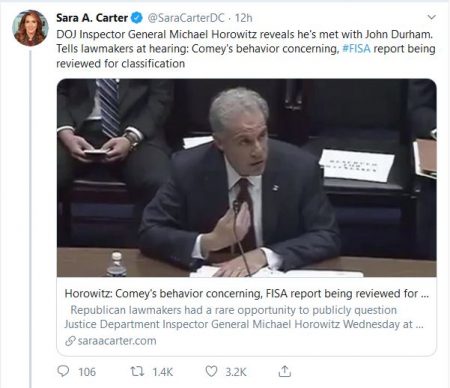 Although surveilled for a year, Carter Page was never charged with a crime.