“WE DIDN’T KNOW WHAT WE HAD” 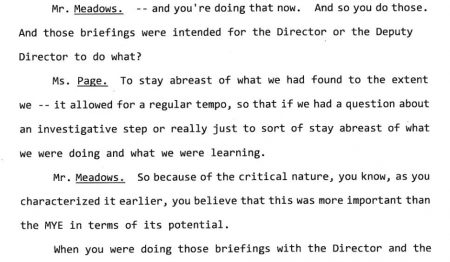 (Sep. 16, 2019) — On page 87 of the transcript of former FBI attorney Lisa Page’s second July 2018 closed-door deposition to members of Congress, Page said that she did not remember the idea of the FBI providing a “defensive briefing” to the Trump campaign to inform that one or more aides might have established inappropriate contacts with Russian operatives “ever coming up.”

Under questioning by House Oversight Committee member Mark Meadows (R-NC11) on July 16, 2018 carried over from page 86, Page confirmed that “briefings” with then-FBI Director James Comey and Deputy Director Andrew McCabe took place on the “Russia” investigation as they had with the “Mid-Year Exam” investigation into Hillary Clinton’s use of a private email server while she was Obama’s Secretary of State.

Page had already said that the FBI team pursuing the “Crossfire Hurricance” probe into the Trump campaign had determined that it was “more important and more serious” than the Clinton email investigation which uncovered classified emails Clinton had either received or sent on a private, unauthorized server from which she later ordered the destruction of what she said she considered her “personal” emails.

Late in October 2016, the FBI reopened the Clinton probe as a result of the FBI New York field office’s locating thousands of Clinton’s emails, which included classified information, the the laptop computer of then-Clinton close aide Huma Abedin’s estranged husband, Anthony Wiener, who was under investigation for having illegal contacts with a 15-year-old girl.

On page 73, Page said that her assessment at the time was that the emails on the Wiener laptop “did not rank in the same way.”

After shifting to the Trump-Russia investigation, Meadows asked, “Who would have made the decision to either tell the candidate or not tell the candidate?” to which Page responded, “That’s a good question.  I don’t recall it ever coming up.”

Page then explained that the reasoning behind refraining from providing such a briefing to the campaign was that “we didn’t know what we had.”  However, she said, the team considered the possibility of Russian influence on the campaign to be a “national security” concern.

After Comey was fired in May 2017, then-Deputy Attorney General Rod Rosenstein hired former FBI Director Robert Mueller to assume the FBI’s investigation into alleged Trump-Russia “collusion” and Russian interference in the 2016 election. After 22 months, Mueller’s team of left-leaning prosecutors found insufficient evidence to conclude that anyone from the campaign, or any American at all, had conspired with the Russian government to affect the outcome of the election.

A major report from the Justice Department’s inspector general is expected about “FISA abuse” to be made public within the next several weeks, with multiple news reports asserting that it will result in recommended prosecutions.  Beginning in October 2016, Comey and other FBI/DOJ officials asserted in four successive affidavits that an unverified “dossier” of allegations of Trump’s conduct while visiting Russia in 2013 was, in fact, verified.

In March 2018 after he was fired, McCabe was referred by DOJ inspector general Michel Horowitz to the U.S. attorney for the District of Columbia Jessie K. Liu for possible criminal prosecution.  After Liu recommended prosecution, McCabe’s legal team directed an “appeal” to the Justice Department which reportedly was rejected.

In a report released in June 2018, Horowitz found Comey to be “insurbordinate” when he gave a solo press conference without the DOJ’s approval claiming that Clinton’s use of a private email server was not prosecutable.  Late last month, another report focusing on Comey’s transmittal of classified memos he wrote about his interactions with Trump prior to his firing was unauthorized and a violation of FBI protocols and DOJ policies, resulting in a referral to the Justice Department.

The DOJ declined to prosecute Comey on those grounds.

Earlier in her testimony (pp. 58 and 59), Page responded to a question from Democrat attorney Hariharan that the FBI did not investigate “the Trump campaign for ‘political purposes,'” contradicting claims then made by President Trump.