“HOW MANY MORE DECADES…?” 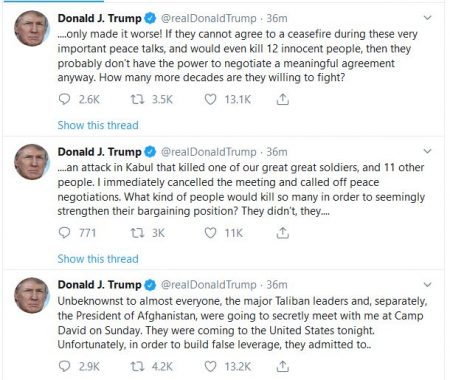 (Sep. 7, 2019) — In the wake of a sharp increase in violent attacks in the Taliban’s home country of Afghanistan over the last week, President Trump tweeted Saturday evening that “secret” discussions planned at Camp David on Sunday with the terrorist group and Afghanistan’s president have been canceled.

“Unbeknownst to almost everyone, the major Taliban leaders and, separately, the President of Afghanistan, were going to secretly meet with me at Camp David on Sunday,” Trump wrote in the first of three tweets on the subject just before 7:00 p.m. EDT.

Eleven others were also killed, to which Trump referred in his second tweet.  As a result, Trump wrote, “I immediately cancelled the meeting and called off peace negotiations.“

The mainstream media responded by reporting the news within minutes of Trump’s announcement.

On Monday, it was reported that an “agreement in principle” had been reached between the U.S. and the Taliban, which attacked the United States nearly 18 years ago at the Pentagon, at the Twin Towers in New York City, and while flying west over the state of Pennsylvania.

Trump had hoped to withdraw a significant number of U.S. troops after 18 years of deployments to the terrorist-plagued country which has seen the installation of a new government and popular elections.

The U.S. special envoy to Afghanistan, Zalmay Khalilzad, has been meeting with the Taliban and representatives from the Afghan government in Doha, Qatar to produce a “peace deal,” CNN reported.

Earlier on Saturday, The Los Angeles Times reported that Afghan President Ashraf Ghani said of the proposed settlement, “Peace with a group that is still killing innocent people is meaningless.”

Concluding his third and final tweet on the subject, Trump asked, “How many more decades are they willing to fight?“