“THE LAW OF THE JUNGLE” 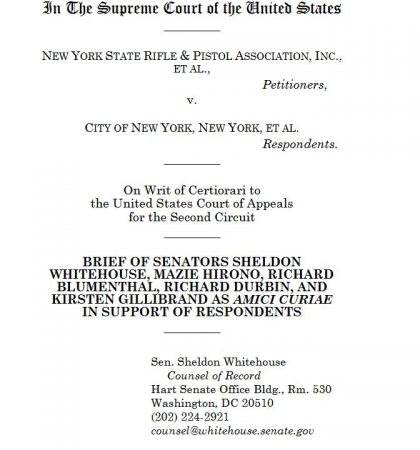 (Sep. 1, 2019) — OK, as a brief primer for what follows, know that when a case is accepted for review by the U.S. Supreme Court, what usually follows is the filing of the opening briefs, the response briefs and the reply briefs.  On occasion, however, in cases involving “hot topics,” various persons or entities other than the litigating parties, but who/which have an interest in the outcome of the case, will seek permission to file so-called “amicus curiae” briefs.

As originally conceived, and as the Latin label implies, the purpose of an amicus curiae brief was to serve as an objective, independent “friend of the court” brief, addressing and/or bringing to the Court’s attention certain issues or principles which the actual parties to the litigation may have overlooked or decided not to include, but which may assist the court in reaching a decision.

They are in essence “friend of the lower court winner” or “friend of the lower court loser” briefs.  With that in mind, it should come as no surprise that in many “hot topic” cases, there are dozens… sometimes scores of applications to file such briefs.  Sometimes, the briefs are objective and helpful; on other occasions, they are simply irrelevant, rude and/or just goofy.

Which brings us to the case of New York State Rifle & Pistol Association v. City of New York, USSC Docket No. 18-280.  There, the question presented is whether a New York City ordinance which, with few exceptions, prohibited city residents from transporting their unloaded and locked handguns out of the city limits violated the Second Amendment.   Cryptically, the U.S. Court of Appeals for the Second Circuit upheld the ordinance, resulting in a petition by the Association for certiorari challenging that ruling.

After the Supreme Court granted review, the City changed its ordinance to be less offensive to the Second Amendment, generating the argument by the defenders of the Second Circuit ruling that the case was now “moot,” thus necessitating that the Court dismiss the petition and not entertain full briefing and oral arguments on the remaining legal issues.  Too risky to allow the Supreme Court another opportunity to uphold citizens’ Second Amendment rights.

When it appeared that the Court would actually entertain the case and not dismiss the petition and instead move the case forward for full briefing and oral argument – much to the horror of enemies of the Second Amendment – five U.S. Senators panicked, preparing and filing what they comically labeled an “amicus curiae” brief.  The brief was authored by Senator Sheldon Whitehouse (D-RI), himself a lawyer admitted to practice before the Supreme Court… more on that later.  It was joined in by Senators Mazie Hirono (D-HI), Richard Blumenthal (D-CT), Richard Durbin (D-IL) and Kirsten Gillibrand (D-NY).  From that cast of characters, it should be evident – even to a blind Martian – that the brief would not support the Second Amendment or the petitioners whose rights were being infringed.

And the blind Martian would be correct: the brief is not only little more than a justified-margins, footnoted juvenile tantrum assailing the “Roberts Five” conservative members of the Court for ruling as they did in a wide variety of some 73 cases, most having absolutely zero to do with the Second Amendment, it actually, in black and white print, libels and/or slanders the Court. 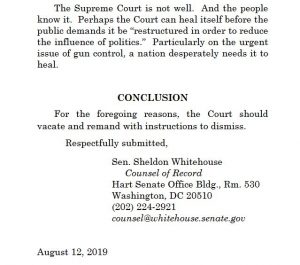 Specifically, the brief asserts that…, wait for it…, wait for it…, this is a quote…: “The Supreme Court is not well.  And the people know it.  Perhaps the Court can heal itself before the public demands it be ‘restructured in order to reduce the influence of politics.’”  See Senators’ “friend of the court” brief at 18.  While certain Justices of the Court may not these days be physically “well,” to contend that the Court itself is not mentally or intellectually healthy is beyond the pale.

In other pages of the brief, the not-so-thinly veiled threat is made that if the Court does not start the recommended healing process by dismantling the power of the “Roberts Five” conservative members… there will be “consequences.”  Those ominous consequences could include the potential for “packing” the Court with leftist jurists more sympathetic to the Senators’ views.  Senator Whitehouse thus fancies himself as something akin to an Oracle of Delphi in the brief, tutoring – and warning – the Court on what it needs to do to “heal itself.”

Seriously?  All this in a brief masquerading as one submitted by a “friend” of the Court?

Here we have five of the most radical, left-wing ideologues in the United States Senate actually lecturing the Court on the perceived “deficiencies” of some 73 of its prior decisions having absolutely nothing to do with the Second Amendment or the issues in the case under consideration.  Moreover, the brief threatens the Court with grave reprisals if it does not “heal itself” before the Senators perform radical surgeries on it.  To merely state these facts is to demonstrate the hubris, arrogance and garden-variety stupidity of the brief as well as its signatories.

In addition, the author – Sheldon (“If-true,-Brett-Kavanagh-is-a-rapist”) Whitehouse – has the chutzpah to include in the brief (and in its table of “Other Authorities” listed in the brief) his own diatribe against the Court published earlier this year as an “Issue Brief” at the leftist website “American Constitution Society,” which website describes itself as “the nation’s leading progressive legal organization.”

If you thought the Senators’ amicus curiae [sic] brief was a slander or libel of the Court, just take a quick peek at what Whitehouse has to say in his not-so-politely-captioned screed: “A Right-Wing Rout: What the ‘Roberts Five’ Decisions Tell Us About the Integrity of Today’s Supreme Court.”  Hint: Whitehouse thinks the Court – ahem…, where he has just filed his brief – is short on integrity because, after all, five of the Justices are conservatives who kowtow to “dark money” forces.  Thus, the Court is “not well” (sometimes also known as “sick”) and needs to “heal itself,”… or else.

What a jerk.  Remember, these are the people who want you to vote for them in 2020 so that they can take complete control of the government and thus, your lives, your fortunes (such as they may be) and your sacred honor.

Mercifully, reacting to the brief, GOP Senate Majority Leader Mitch McConnell (also known as “the adult in the room”) sent a letter to the Supreme Court signed by every Republican Senator in Congress.  The letter makes it clear that the threats to “pack the court” or otherwise subject it to progressive “healing restructuring” by Whitehouse, Blumenthal, Hirono, Durbin and Gillebrand and their Democrat pals is, as long as the Senate remains in GOP control, “dead on arrival.”   Excellent.

In this regard, the Rules of the Supreme Court may help put the Senators’ brief into perspective and provide some guidance on an appropriate course of action.

The fact that the Whitehouse tantrum constitutes a broadside attack against the conservative wing of the current Court – as opposed to being a document containing “relevant matter” intended to be of “considerable help” to the Court – renders the brief completely off base and irrelevant.  It is rude, adolescent, linguistic chaff.  And yet four U.S. Democrat Senators joined Whitehouse in slapping the Court in its collective face.

In addition, while Rule 25 of the Court addresses “briefs on the merits,” it may yet be applied to the Whitehouse brief.  While the brief seeks to decorate its “merits” appearance by mentioning the Second Amendment a few times, it relegates the amendment to the sidelines and subordinates it to the brief’s central purpose, i.e., the libeling and/or slandering of the Court because Senator Whitehouse disfavors and disapproves of its makeup.   Rule 25(6) provides: “A brief shall be concise, logically arranged with proper headings, and free of irrelevant, immaterial, or scandalous matter. The Court may disregard or strike a brief that does not comply with this paragraph.” (Emphasis added).

It is one thing to trash the Supreme Court in an “Issue Brief” posted at a progressive organization’s website.  The First Amendment protects that activity.  But it is quite another to incorporate that trash into a “friend of the court” brief filed in the very court being denigrated.  Whitehouse probably knows better, but being a radical leftist/progressive, does not care.

Accordingly, the Supreme Court should strike the Senators’ brief, consider admonishing or reprimanding Whitehouse for filing it in the first place and remind him that his continued membership in the practicing bar of the United States Supreme Court is a privilege…, not a right.

In this regard as well, the Court may wish to take note of the fact that Senator Whitehouse is now the subject of a bar complaint filed by Mr. Tom Fitton, President of the extraordinarily important government watchdog entity – not unlike The P&E –: Judicial Watch.  The bar complaint was filed with the Rhode Island Supreme Court – with a copy sent (good courtesy move) to the Clerk of the U.S. Supreme Court as well – after Whitehouse filed his “friendly” brief.

The core of the Judicial Watch complaint is that, since Whitehouse is on inactive status as a lawyer in Rhode Island, his filing of the brief on his behalf as well as on behalf of the other four Senators constituted the unauthorized practice of law.  While Mr. Fitton suggests that his actions “warrant a full investigation by the Unauthorized Practice of Law Committee,” he does not go so far as to suggest that the brief Whitehouse filed in the Supreme Court be stricken.  Your humble servant does.

And if the brief were to be stricken by a unanimous 9-0 vote of the Justices, that would be icing on the cake, underscoring the commitment of the Court to the rule of law as opposed to the law of the jungle, where Senator Whitehouse and his amicus curiae cohorts comfortably dwell, dissing and threatening those with whom they disagree.

Your humble servant finishes this offering as usual: vote very carefully in 2020.