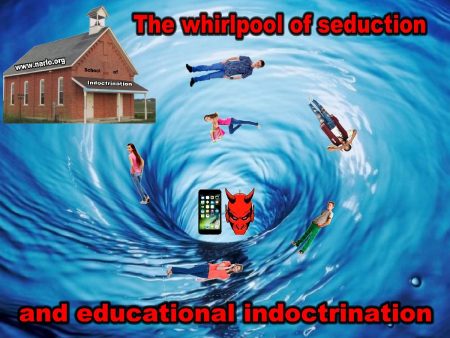 People keep asking, especially those over 70, what the heck happened to my country?  How is it that America spawned the likes of Bernie Sanders, Elizabeth Warren, Cory Booker, Kamala Harris and some gay mayor from Indiana named “Boodugig,” or whatever, running for president?  How did the idiot Bill de Blasio ever become mayor of New York?  Why are Democrat-controlled cities going (or have gone) bankrupt and are hotbeds of riots, protests, mayhem, shootings, killings, murders, robberies and general unrest and high anxiety?  Why is America suffering from an invasion of illegal aliens from Mexico and Central American countries?  Why are there so many homeless in America, the richest country in the world?  Why did Americans let the Democrats destroy the American healthcare system by passing ObamaCare?  But worse than that, why have our public schools and colleges been turned into indoctrination centers for Progressivism, socialism, radical environmentalism and world government?

One of our readers wrote: “Those of us who grew up in the 1940’s and 1950’s are well aware that we grew up in an America much different from the America of today.  It is truly sad how we, and our parents, allowed the government to gain so much power at the expense of our liberty and freedom.  Once we allowed the government to require a license to exercise any of our rights, that right became a privilege and the freedom was gone.”

Every American exists in a bubble of propaganda, manipulation and elaborate cons that come at them from every direction.  From TV, to radio, to newspapers, to public schools, to the Internet, to government pronouncements and military operations, truth is cloaked in subterfuge, half-truths and lies.  Advertising, especially TV ads, are the worst.  Sadly, most Americans have not been trained to see through the propaganda, expose the con and filter out the lies and half-truths because they never learned or were never taught how to use logic, intellect and common sense.

There are many reasons why we are where we are today.  But one of the main reasons is we have allowed the flawed and anti-American ideology of Progressivism to be slowly embedded in all of our institutions over the last century plus.  We have allowed a perversion of science, under Climate Change, to create an imaginary crisis that has permeated the body politic such that to deny Climate Change is heresy and must be censored by any means.  Man is the culprit and he must be punished.  The climate alarmists are afraid to even debate the science for fear that their con game will be exposed.  We have an entire web page packed with highly credible articles debunking Climate Change HERE.  See for yourself.

If our public schools and colleges had fostered and promoted critical thinking instead of socialist, environmental and one-world mush by rote learning, the masses would see through Progressivism and Climate Change as nothing more than government mechanisms to control the people and make them debt slaves such that they are incapable of rising up against government.

To the exclusion of reality, high tech has wooed us into obsessive oblivion and addiction where reality resides inside a 3″ x 5″ electronic plastic box.  On top of that our public schools and colleges have continued Progressive indoctrination for at least the last three or four generations of Americans, and those three or four generations are none the wiser.  You don’t know what you don’t know!

Our children are the leaders of the next generation.  The greatest gift we can give to them is not just our undying love and reasonable discipline, but what we teach them and how we oversee what others are teaching them.  If you are not interested in how your children are being manipulated, molded and indoctrinated by the public education system at the behest of government, unions and special interest groups, you are not interested in your children’s, much less the nation’s, long-term well-being and future.

There are three major influences on your children’s public education:  the unions that control the teachers, the colleges that teach the teachers and those individuals and entities that control the curriculum and the textbooks from which your children will learn.  Although most teachers are basically devoted to teaching their students, they are still controlled by the unions and most unions are hopelessly corrupt.  The teachers are also a product of what they are taught in the liberal teaching colleges.  Both the teaching colleges and the individuals and entities that control the curriculum and the textbooks are equally corrupt because they are fundamentally controlled by a single, distorted and flawed ideology that permeates our culture.  This ideology (Progressivism) is tantamount to a cult like religion where the ideology is an absolute (like Islam), at the exclusion of all other ideologies, ideas and concepts.  Make no mistake.  The goal of this ideology is to obtain absolute power and they are very close to being successful ….. by any means.

What children will learn in public education will have a profound effect on the rest of their lives.  We call it filling up their “Little Black Boxes.”  It would seem that a parent’s primary duty and obligation is to make sure that what goes into their highly impressionable “Little Black Boxes” is essentially fundamental truths on which their children can rely in their adult lives.  That is not happening in America’s public school system today.  Just the opposite is true and we are paying the price with a younger generation being fully and formally indoctrinated into socialism, radical environmentalism, pseudo climate science and a world dominated by a single governing body.  That is why millennials are going for socialist Bernie Sanders (and the other socialist candidates for president) by the millions and “light up” at the thought of free everything, totally ignorant of the fact that nothing is free.

On top of generational indoctrination by government and special interests in our public schools and colleges, our younger generation has now succumbed to the siren call of addictive high technology.  You can’t go into a restaurant without seeing family members, at one table after another, fiddling with their Iphones or Ipads.  They hardly talk to each other.  These devices are so innocently seductive, a person falls into the hidden trap of obsessive addiction almost instantly.  The younger they are, the quicker the addiction.

One woman wrote about her experience with the Iphone and her two-year-old:

“My son is 22 months old, and his favorite toy is my iPhone X.  I hide it everywhere: behind stuffed animals, between books, in potted plants.  He finds it every time and toddles up to me, clutching it in his tiny fist and wailing, ‘Melmo. Melmo, pease. Melmo. Melmo, pease.’ ‘Melmo’ is how he says ‘Elmo,’ and what he wants is to watch Sesame Street videos on YouTube.  When I say no, he crumples onto the floor and weeps.”

One wonders why a mother would introduce her two-year old to an Iphone in the first place.  If the weeping two-year-old was instead an adult and addicted to drugs, that mother’s son could very well be tempted to rob a store, or a bank, to get the money to buy the drugs to which he is addicted.

America has the most powerful, well-trained and well-equipped military on the planet.  Our power to destroy or defeat an enemy militarily is unmatched.  But with all this military might, that same military is powerless against an embedded and institutionalized ideology, whether that ideology is abroad (Islam), or right here at home  (Progressivism).  It is also powerless against the hidden enemy of broad cultural technological addiction.

The Romans learned this the hard way when they were confronted by the ideology of Christianity.  First, Christianity was little more than wispy smoke that smoldered in the far reaches of the empire.  But then it became a raging fire that burned its way across all of the lands surrounding the Mediterranean and beyond.  There is nothing more powerful than an idea that becomes embedded in the minds of the general population.

Added to this toxic soup of Progressivism is the deadly whirlpool of technological seduction.  Sadly, a powerful but flawed ideology and an incurable addiction have become the norm in the general population of America, and if that ideology and addiction are not defeated, America has no future as a free nation.

So many of us profess to be smart, educated, knowledgeable and wise, and yet we are taken in virtually every day by scoundrels, traitors and the con artists that walk the halls of government and talk out of both sides of their mouths about freedom, liberty and the American way.  When we discover their treachery or corruption, our mouths drop open in disbelief.  We cry, “How can this be?  Are not those who represent us honorable men?”  After a brief moment of registering our disgust and disdain with politics as usual, we return to “Dancing With The Stars” or “Wide World of Wrestling” or football, while the politicians return to treachery and corruption, no longer anxious that the people might actually rise up and challenge them.  The politicians have nothing to fear when the people are paper tigers, and at best, the American people are paper tigers.  Except maybe independent rural landowners who still believe in the foundations of our liberty and are willing to fight for it and preserve their CONSTITUTIONAL RIGHTS.

If you are over 70, you know what we are talking about.  If you are under 40, most probably don’t have a clue.

Sucked In By Technology – Brainwashed By Education added on Sunday, August 25, 2019

One Response to "Sucked In By Technology – Brainwashed By Education"