CLAIM:  THERE IS “NO TRUE GRAND JURY IN TENNESSEE” 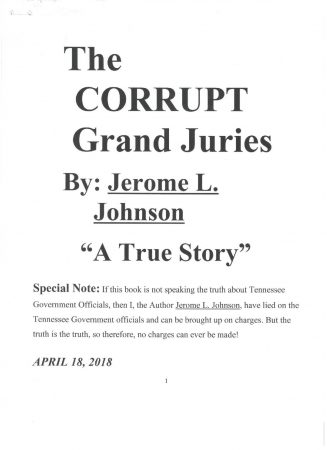 Johnson became interested in the composition and function of Tennessee grand juries in 2015 after then-inmate Walter Francis Fitzpatrick, III informed him of his research and findings showing that Tennessee grand jury foremen are handpicked by criminal court judges and often serve for decades in contravention of state law.

Johnson was indicted in Shelby County, on which this publication has reported for more than two years after Fitzpatrick, followed by numerous local jail inmates, brought to our attention the long-standing grand jury foremen and reported systemic corruption within the prosecutor’s office.

Many Shelby County jail inmates have related their arrest, without indictment, and long-term jailing without trial for periods exceeding a year.

The Fifth Amendment guarantees that “No person shall be held to answer for a capital, or otherwise infamous crime, unless on a presentment or indictment of a grand jury, except in cases arising in the land or naval forces, or in the militia, when in actual service in time of war or public danger; nor shall any person be subject for the same offense to be twice put in jeopardy of life or limb; nor shall be compelled in any criminal case to be a witness against himself, nor be deprived of life, liberty, or property, without due process of law; nor shall private property be taken for public use, without just compensation.”

It was in 2009 that Fitzpatrick discovered that the Monroe County, TN grand jury foreman had been serving continuously for more than two decades and that no documentation of his appointment or vetting was on file with the chief clerk’s office in Madisonville.

Shelby County and Rutherford County have similarly failed to provide documentation through Public Records requests concerning the grand jury foreman’s appointment or how long he or she might have been serving.

Johnson claims that because the foreman is personally selected and appointed by the judge, at present there is “no true grand jury in Tennessee that is convened (assembled) as prescribed by law  (p. 5). “The Creation Of The Office Of Grand Jury Foreman,” Johnson wrote, deprives Tennessee defendants of their constitutional right to due process.

Johnson is currently housed at the Northwest Correctional Complex (NWCX), on which The Post & Email has reported extensively for more than four years based on inmate letters we have received as well as public reporting.

The book is available here:  https://www.amazon.com/Corrupt-Grand-Juries-True-Story-ebook/dp/B07WF8QYBC/ref=nav_ya_signin?keywords=books+Jerome+L.+Johnson&qid=1565712176&s=gateway&sr=8-3&