FDA MUST NO LONGER LET ORGANIC FOOD GROWERS, MANUFACTURERS AND SELLERS GET AWAY WITH LIES 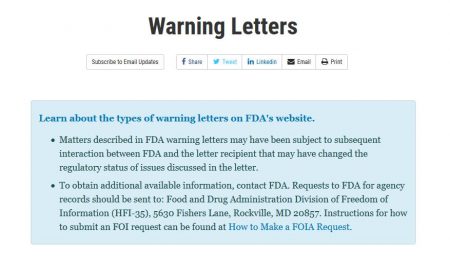 (Aug. 12, 2019) — A couple years ago, the US Food and Drug Administration sent a “Warning Letter” to Nashoba Brook Bakery, advising its owners that listing “love” as an ingredient in their granola violated the Food, Drug and Cosmetic Act. The product was “misbranded,” because “love” is “not a common or usual name of an ingredient,” FDA said. Such deceptive labeling practices could mislead consumers and are not allowed.

FDA has also warned and cited companies that make “unfounded,” “unproven” or “unsubstantiated” claims about their products. FDA is committed to “protecting the public health by taking action as needed against companies that deceive consumers.” It will not let companies say cannabidiol “has been linked to the effective treatment of Alzheimer’s disease,” if they don’t have solid evidence to back the claim up.

Claiming your product is better or more effective than a competitor’s is also “misleading” if there is “no evidence” to support the claim. Labels and advertising must be “truthful and not misleading” – or else.

FDA policies are equally clear in the arena of organic, conventional and biotech (genetically modified or engineered, GMO or GE) seeds, ingredients, products, manufacturing, distribution and sales. The agency’s published guidance states that “false or misleading” food labeling includes “the statement ‘none of the ingredients in this food is genetically engineered’ on a food where some of the ingredients are incapable of being produced through genetic engineering (e.g., salt).”

“GMO-free” claims, FDA says, can also be “false and misleading” if they imply that a certain food “is safer, more nutritious, or otherwise has different attributes than other comparable foods because the food was not genetically engineered.” Claiming a food is healthier or better tasting, because it’s organic, would fall under this guideline of “different attributes … because it was not genetically engineered.”

However, in stark contrast to the way it polices other food, drug, cosmetic and medical device industries, the FDA has let the $52.5-billion organic food industry and pro-organic, anti-conventional farming, anti-biotechnology interests routinely and flagrantly ignore agency rules. Their ads, websites and campaigns deliberately mislead consumers and denigrate competitors with multiple falsehoods.

Copper sulfate has multiple pesticide and fungicide applications in organic farming; it persists in soil, is the most common chemical residue in organic foods, and can damage human brains, livers, kidneys and stomach linings. The EU found it can cause cancer but didn’t ban it because organic farmers have “no viable alternatives.” Natural and synthetic pyrethrin pesticides are powerful neurotoxins, highly toxic to bees, cats and fish, and linked to leukemia and other health problems in humans. Rotenone is a highly toxic pesticide that can enhance the onset of Parkinson’s disease. There are many more examples.

Moreover, GMO crops use 37% fewer chemical insecticides and herbicides than conventional versions of the same crops (because biotech crops have systemic or internal biological protections against insects). Indian farmers who plant GMO cotton have doubled their cotton production, dramatically reduced insecticide use and prevented over two million pesticide poisoning cases a year.

Scientific and regulatory bodies worldwide have found that biotech foods are as safe and healthy as foods produced by conventional breeding, including: the World Health Organization, European Food Safety Authority, British Royal Society, American Medical Association, and US National Academy of Sciences, Environmental Protection Agency, Department of Agriculture and Food and Drug Administration.

More than 100 Nobel Laureates in chemistry, medicine and biotechnology have likewise said crops and foods improved through biotechnology are “as safe as, if not safer than those derived from any other method of production.” Worldwide and with over four trillion US servings of foods containing at least one biotech ingredient, “there has never been a single confirmed case of a negative health outcome for humans or animals from their consumption.”

Biotech crops allow farmers to produce more food, from less land, using less water and fewer pesticides, and with greater resistance to droughts, floods and climate change, than is case with conventional crops – and certainly with organic crops. GE crops achieve much higher food yields per acre – whereas organic farms require 40% more land to as much as 70% more land to produce the same amount of food as their conventional or biotech counterparts.

Stanford University and other studies have repeatedly found that organic foods are no healthier or more nutritious than conventional or GE alternatives, while taste tests in Germany discovered that “discerning” foodies could not tell the difference between organic food and McDonald’s chicken nuggets!

But despite these facts, the endless campaigns of false, misleading, unsubstantiated claims, full-frontal attacks on biotech and conventional farming, and outright lies are clearly working. Thousands of companies pay the Non-GMO Project big bucks to get “GMO-Free” butterfly emblems on over 55,000 products – including salt, orange juice, tomatoes and other items that have no biotech counterparts.

US and EU consumers actually think organic food is better, tastier and more nutritious than conventional or biotech food – and are willing to pay up to 50% more for “organic” milk, bread, fruits and vegetables. Less than 40% of American adults believe genetically modified foods are safe to eat.

Many of the most outrageous activist campaigns are funded directly or indirectly by organic and natural food companies and allied foundations. They’re often conducted along or in coordination with lawsuits against glyphosate (Roundup) and campaigns against neonicotinoid pesticides and biotechnology, to expand organic industry market share and profits, and drive entire companies and industries out of business. Non-GMO Project director Megan Westgate proudly proclaims her goal is “to shrink the market for existing GMO ingredients and prevent new commercial biotech crops” from ever being introduced.

The FDA says trying to enforce its rules would force it to go after every container and company that make false, misleading, deceptive, pejorative organic claims. That’s nonsense. It would only have to go after a few of the biggest, worst, most prominent violators. Others would fall in line pretty quickly.

A few Warning Letters could tell organic farmers, manufacturers and retailers to cease making these claims or marketing their products until they provide replicable, convincing, peer-reviewed evidence that organic foods are chemical-free, safer, more nutritious, more eco-friendly than conventional or GMO varieties – and that GE crops have harmed people or the environment in demonstrable ways.

Organic producers and retailers could also be required to test their foods for residues of toxic organic chemicals. Give them six months to comply – and follow up with legal actions, major fines, and requirements that every miscreant issue front-page and top-of-their-website admissions and apologies.

The FDA, EPA, Agriculture Department and Federal Trade Commission have shown little tolerance for other industry violations. Big Organic should no longer be exempt from truth in advertising rules.

Paul Driessen is senior policy analyst for the Committee For A Constructive Tomorrow (www.CFACT.org) and author of books and articles on energy, climate and environmental policy.