What Did Bruce Ohr Tell the FBI?

AND WHY THE DELAY? 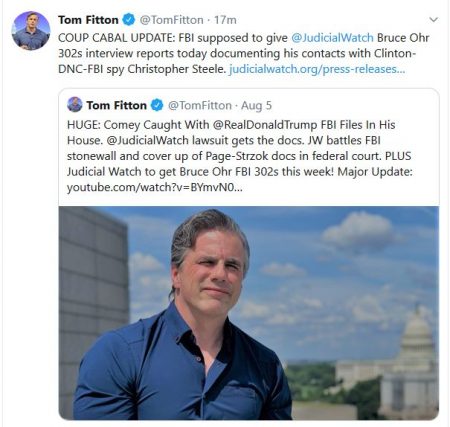 (Aug. 8, 2019) — On Thursday morning, Judicial Watch President Tom Fitton tweeted that his organization is expecting to receive the “302s,” or written interview summaries, of DOJ official Bruce Ohr from the FBI.

The documents are likely those which Fitton indicated last week he expected to release Monday and which Fox News “Hannity” guest host Jason Chaffetz reported would be released that day.

Approximately a year ago, Ohr testified to members of the House Judiciary and Oversight & Government Reform Committees that in 2016, he acted as a liaison between former British intelligence agent Christopher Steele and individuals at the FBI and DOJ regarding information Steele imparted to him alleging nefarious connections between Donald Trump and the Russians.

Steele had been an FBI confidential human source (CHR) until November 1, 2016, when he was terminated for reportedly leaking to the media. On September 23, 2016, an article appeared in Yahoo! News by Michael Isikoff reporting that former Trump campaign aide Carter Page was under investigation for possible inappropriate ties to Russians.

Page was never charged with a crime.

Isikoff has since admitted that the claims made in what became known as the Steele “dossier,” which was likely his source for the story, remain unverified.

In early May, Ohr’s wife Nellie was referred to the Justice Department for criminal investigation after House Intelligence Committee members concluded that she might have been dishonest in her testimony to members of Congress, which occurred in October last year.

Even after his termination, Steele continued to gain an audience with the FBI, Bruce Ohr testified, initiated by at least one FBI agent.

On May 17, 2017, Mueller was hired by then-Deputy Attorney General Rod Rosenstein to complete the unprecedented investigation launched by the FBI into a presidential campaign. Mueller’s report, delivered to Attorney General William Barr on March 22 of this year, indicated insufficient evidence was found to conclude that anyone in the campaign, or any American at all, conspired with Russians to affect the outcome of the 2016 presidential election.

Mueller did, however, conclude that the Russian government conducted interference in the election and continues to pursue ways to disrupt ongoing U.S. elections.

An item of investigation likely added later to Mueller’s responsibilities was whether or not Trump obstructed justice as the Mueller investigation proceeded. On that point, Mueller’s team declined to reach a conclusion, a point Mueller was forced to clarify at the opening of his second July 24 appearance on Capitol Hill.

The link in Fitton’s latest tweet leads to a Judicial Watch press release dated June 7, 2019 reporting that as a result of a FOIA request, JW obtained government documents showing that although later demoted twice, Ohr received a sizable bonus and pay increase in 2016.

It is unclear whether or not the Ohr 302s are part of a tranche of documents to be declassified via an executive order President Trump issued in late May.