“I SAY HE SHOULD RESIGN” 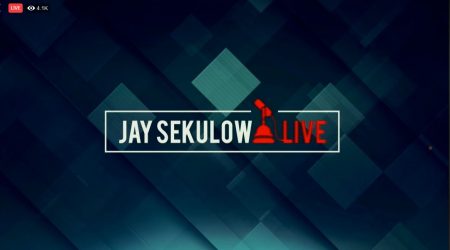 (Aug. 8, 2019) — On the “Jay Sekulow LIVE!” radio show Thursday, host Jay Sekulow, who is also an attorney representing the Trump White House and Chief Counsel for the American Center for Law and Justice (ACLJ), and his son, Jordan, denounced Rep. Joaquin Castro‘s recent publication of a list of donors from the San Antonio area to the 2020 Trump re-election campaign.

“This is an outrage from this congressman,” the elder Sekulow said at 12:15, proposing congressional legislation to prevent it from occurring in the future.

On Saturday morning, a mass shooting killed 22 people at a Walmart shopping center in El Paso, TX.  Less than 24 hours later, a man in Dayton, OH killed nine people, including his own sister, outside a bar.  In the first case, the suspect was taken into custody, while the second perpetrator was killed by police.

Sekulow stated that Joaquin Castro’s claim that he intended no harm to the donors rings hollow and that publicizing their names and places of business was “intentional.” 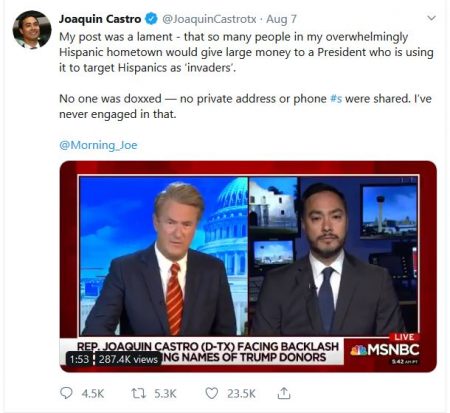 As of Thursday afternoon, Julian had not denounced his brother’s publication of the names and businesses.

“I think they’ve put their lives in danger,” Jordan opined.  “This is a kill list that the congressman retweeted…I say he should resign.  A day after a shooting, he put out a list…”

Following a break, the discussion turned to the First Amendment rights of Americans encompassing political support and contributions to candidates of their choice.  Jay Sekulow pointed out that in releasing the list of Trump donors, he also exposed not one, as was originally reported, but six of his own supporters to potential harassment or worse.

Jay Sekulow predicted that Joaquin Castro will not apologize for releasing the names.