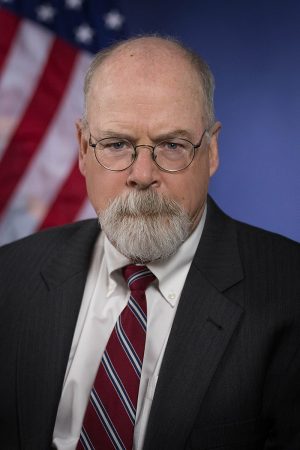 (Aug. 1, 2019) — On Thursday night’s “Hannity,” John Solomon of “The Hill” said he can report with certainty that U.S. Attorney for the District of Connecticut John Durham has interviewed Joseph Mifsud, the mysterious Maltese professor who in spring 2016 approached then-Trump volunteer campaign aide George Papadopoulos with allegations that “Russians” had “dirt” on Hillary Clinton.

Earlier this year, Durham was tasked by Attorney General William Barr with investigating the origins of the Russia “collusion” investigation which clouded the first 2+ years of the Trump administration and encompassed surveillance of at least one Trump campaign aide, Carter Page.

For more than two years, Solomon has been exposing corruption within the FBI and Justice Department stemming from the collusion probe. Launched by the FBI during the last presidential campaign, the investigation was assumed by now-former Special Counsel Robert Mueller in May 2017.  Mueller concluded the probe in March without charges of “conspiracy” against any member of the Trump campaign.

In April 2016, Mifsud told Papadopoulos that unnamed “Russians” possessed incriminating information on Democratic presidential contender Hillary Clinton, likely in the form of emails from her private server.  According to President Trump and other sources, Clinton discarded or removed from the server 33,000 emails which she said were personal in nature.

Papadopoulos has alleged that he, too, was the subject of a “FISA” warrant or another form of surveillance by the U.S. and foreign intelligence services.

Solomon told Hannity that Mifsud told Durham in a deposition “why he set that entire process of introducing George Papadopolous to Russia in motion in March of 2016, which is really the flash point, the starting point of this whole Russia collusion narrative.”

“I can also confirm that the Senate Judiciary Committee has also obtained the same deposition,” Solomon continued.

Solomon referenced “transcripts” which Hannity and Papadopoulos claim exist from a meeting Papadopoulos had in May 2016 with then-Australian Ambassador to the UK Alexander Downer in which Downer intensely questioned him over his knowledge of “Russia” and Hillary Clinton.  Solomon suggested that Papadopoulos’s responses to Downer at the time demonstrate that crucial information was withheld by the FBI when it alleged that Papadopoulos was dishonest during his interviews with agents.

In numerous interviews over the last nine months, Papadopoulos, who accepted a plea deal with the Justice Department for lying to the FBI and served 12 days in federal prison. suggested that if the “exculpatory information” of which he is now aware had been presented to his legal team, he would likely have rejected the plea agreement.

For his part, Hannity has stated that such exculpatory evidence is about to be released through the first documents Barr is expected to declassify in the coming days and weeks.

In his report, Mueller described Mifsud as having ties to Russian operatives, but House Intelligence Committee ranking member Devin Nunes has said, citing photographic evidence appearing in The Guardian, that Mifsud is a Western intelligence agent.

In testimony to the House Judiciary Committee last Wednesday, Mueller did not dispute that Mifsud “lied” to his investigators and refused to elaborate as to why his team declined to recommend Mifsud for criminal prosecution.