WHAT IS THE FBI, AND EVERYONE ELSE, HIDING? 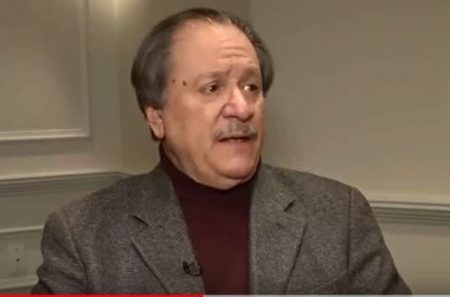 Although tight-lipped, Hannity’s prediction mirrors tweets Papadopoulos has issued in recent weeks hinting that “transcripts” of his conversation with former Australian ambassador to the UK Alexander Downer was recorded and demonstrates that he had no relationship with any Russians during the 2016 presidential campaign cycle.

In late May, President Trump announced that he had authorized Attorney General William Barr, in conjunction with the U.S. intelligence community, to begin a review of documents associated with the Russia “collusion” investigation in order to declassify all material releasable to the public.

Over the weekend, it was announced that Director of National Intelligence Dan Coats will leave government service on August 15, to be replaced by current Texas congressman John Ratcliffe pending his Senate confirmation.

On Monday morning, Atty. Joseph DiGenova, an informal Trump adviser and former U.S. Attorney for the District of Columbia, said on WMAL radio on The Larry O’Connor Show that beginning Wednesday, Barr will begin releasing documents.

DiGenova’s remarks begin at approximately the five-minute mark, at which time he said that “Coats was in the way,” along with FBI Director Christopher Wray, regarding the declassification of Russia documents.

DiGenova’s claim appears to support assertions made by The Hill‘s John Solomon about the FBI’s opposition to releasing documents associated with the Russia probe, and specifically, the activities of Russia “dossier” compiler Christopher Steele.

Steele’s dossier was used to obtain four FISA warrants on former Trump campaign aide Carter Page, who was never charged with a crime.

While Hannity appeared to believe that the first documents to be released would be associated with Papadopoulos, DiGenova emphasized documents requested over more than two years by Devin Nunes, current ranking member and former chairman of the House Intelligence Committee.

Such documents could include, DiGenova said, FBI “302s,” which are summaries of interviews with sources.

Papadopoulos, 31, is author of “Deep State Target,” in which he describes bizarre encounters he had in Europe with shadowy figures approaching him once he was announced as a member of Trump’s advisory team in March 2016.  After his arrest in July 2017 at Dulles Airport, Papadopoulos pleaded “guilty” to one count of lying to the FBI, although in his book, he wrote that his attorneys were never presented with the transcripts from his conversation with Downer, and perhaps others, which reportedly contain exculpatory information.

In a parody of former FBI Director James Comey’s response to Trump’s suggestion that recordings of their interactions existed prior to Trump’s termination of Comey on May 9, 2017, Papadopoulos tweeted on Monday:

On Sunday, Papadopoulos told “Sunday Morning Futures” host Maria Bartiromo that he would be retrieving $10,000 from an attorney in Greece with whom he left the money after Charles Tawil, described in his book, handed it to him in a hotel room in Israel.  Papadopoulos now suspects an “entrapment” scheme on the part of the U.S. government, as it was after he was given the cash that he was arrested by the FBI upon his return flight to the U.S.

Papadopoulos described to Bartiromo more than a half-dozen agents manhandling him and combing through his suitcases looking for “money.”

“It’s marked bills and the intel committees want to see it,” Bartiromo tweeted after her program aired on July 28. 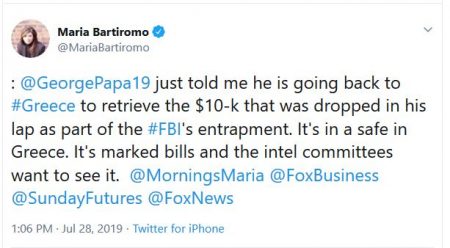 What Documents Might We See on Wednesday? added on Tuesday, July 30, 2019

2 Responses to "What Documents Might We See on Wednesday?"