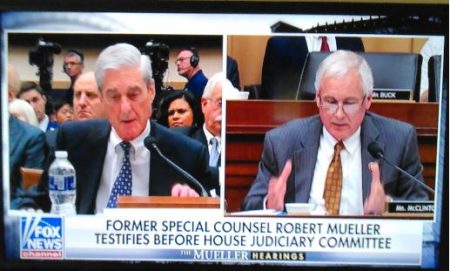 Mueller gave sworn testimony under subpoena regarding his office’s investigation into Russian interference in the 2016 election and report completed earlier this year.

Mueller responded to Biggs that he “had no knowledge” of the meetings, which appeared to surprise Biggs since he said “evidence” exists that such meetings took place.

Contradicting Fox News Legal Analyst Gregg Jarrett, Mueller said that during his May 16, 2017 interview with Trump and others to discuss the vacant FBI director position, the reason(s) for Comey’s dismissal were not raised.

Biggs quoted Jarrett’s reporting on that issue, which has often occurred on the “Hannity” show in recent months.

On two occasions between 10:30 and 11:00 a.m. EDT, Mueller declined to read verbatim from the report his office produced to the attorney general in March.  “I’d be happy to have you read it,” were Mueller’s words to both Rep. Jamie Raskin and Rep. Ted Lieu, both Democrats.

Mueller Contradicts Himself on Alleged Meetings with Rosenstein Prior to Special Counsel Appointment added on Wednesday, July 24, 2019