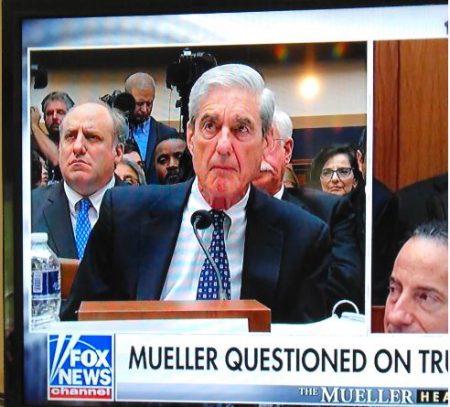 (Jul. 24, 2019) — Shortly after 8:30 a.m. EDT on Wednesday, former Special Counsel Robert Mueller was sworn in to give much-anticipated testimony to the House Judiciary Committee as to his report provided to the Justice Department which found insufficient evidence that anyone from the Trump campaign conspired with Russians to affect the outcome of the 2016 presidential election.

As of 9:21 a.m., Mueller arguably appears confused, outside of the limitations placed on him by the Justice Department to contain his responses to the parameters of the report.

He has often asked that questions be repeated or indicated that he does not comprehend the questions.

Mueller is accompanied by Aaron Zebley, one of the prosecutors Mueller employed during the 22-month Special Counsel probe which unofficially ended in March when Mueller turned in his report to Attorney General William Barr.

While speaking with Zebley on several occasions, Chairman Jerrold Nadler asked Mueller to speak more directly into the microphone.

When Rep. Steve Cohen asked Mueller if he knew of any examples where Trump tried to influence then-Attorney General Jeff Sessions to “unrecuse himself,” Muller first responded, “I’d have to pass on that.”  When Cohen repeated the question, Mueller agreed with what is stated in the report on the issue.

“In America, nobody is above the law,” Cohen vehemently concluded.

At 9:29 a.m., Mueller said he was “not familiar with” the company which procured the “Steele dossier” when asked by Rep. Steve Chabot.  Glenn Simpson, the co-founder of the company, Fusion GPS, testified privately to members of Congress in 2017.

To many of Chabot’s questions, Mueller responded, “That’s outside my purview.”

In other instances, Mueller appeared unfamiliar with the contents of the report, and he often stuttered in his responses.

At 9:39 a.m., Rep. Louis Gohmert asked Mueller who wrote the remarks he made on May 29, 2019 in an ad hoc press conference announcing his departure from the Special Counsel role, to which Mueller responded, “I’m not going to get into that.”  Gohmert then concluded that Mueller did not write them himself.

When it was his time to ask questions, Gohmert held up and asked to be entered into the record a booklet he wrote alleging that Mueller’s history is checkered by a lack of integrity and proper oversight.

Gohmert grilled Mueller as to when he knew that former counterintelligence official Peter Strzok possessed “an animus” toward Donald Trump.

At 9:43, Gohmert passionately said that Mueller “perpetuated injustice” by investigating Trump for “obstruction of justice” after the campaign was known not to have “colluded” with Russia.  To that, after Nadler banged his gavel to mark the end of Gohmert’s time, Mueller gave the response, “I take your question,” which garnered soft laughter from some members of the audience.