Of Squads and Suicide Pacts 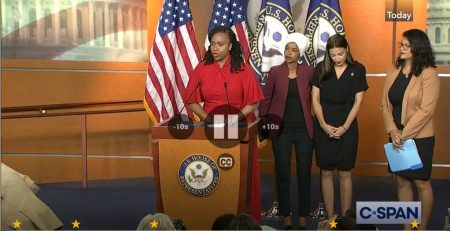 (Jul. 19, 2019) — “[W]hile the Constitution protects against invasions of individual rights, it is not a suicide pact….”  Those words were first articulated by Supreme Court Justice Arthur Goldberg, a Democrat appointed to the Court by President Kennedy, in a case called Kennedy v. Mendoza-Martinez, 372 U.S. 144 (1963).

If Goldberg and Kennedy were alive today, they likely would first be aghast, then deeply saddened and finally, enraged by the malignancy that has become the Democrat Party, festooned with its newest tumor, the “Squad.”  Together, these America-trashing jerks are sprinting headlong down a path to prove Goldberg wrong.  Stated otherwise, the Democrats and Squad members now seek to use the Constitution as the sword by which the United States is required to commit harakiri or seppuku.

The Squad is now on full display for the electorate, and despite the liberal smearing of cosmetics over their faces, it is not pretty.  This congressional clique of four female freshmen – or must we say “freshpersons”? – has captured the hearts and brains of progressives, Alinskyites and flat-out Antifa-radicals nationwide.  Point of clarification: your faithful servant uses the term “brains” in the preceding sentence because it is clear that most sentient people recognize that although progressives, radicals and Alinskyites still possess an organ known physiologically as a “brain,” they have, in fact, lost their “minds” and with that, the capacity for rational thought.

It is generally acknowledged that House Speaker Nancy (“I-left-my-brains-in-San Francisco”) Pelosi is the one who coined the term “squad” when referencing the clique.  The group consists of Representatives Alexandria Ocasio-Cortez, acronymed “AOC”; Ilhan Omar; Rashida Tlaib; and Ayanna Pressley.  Daily – and sometimes hourly – these four Democrats proudly display their disdain for America, their hatred for President Trump, their contempt for the rule of law and their desire to bring America to its knees.

While many may agree with President Trump that certain folks should “go back to where they came from,” a better way of conveying that message is to just tell folks who don’t like it here to simply “get out of Dodge.”  There are many nations in the world sharing their views… Iran… North Korea… Venezuela….

AOC (“Always On Crack”) compares facilities at the southern border to concentration camps and the Border Patrol agents there to Nazi guards; Omar refers to the 9/11 World Trade Center attacks by Islamist radicals as an event where “some people did something”;  Tlaib assures us that they are going to impeach the “*%>#@*&*^!%#”; and Pressley goes one degree cuter by refusing to refer to President Trump as the president, calling him merely the “occupant of the White House.”  And the media gushes.

Your faithful servant has frequently referred to Barack Hussein Obama II as an “occupier” of the Oval Office, but only because there was a rational basis for it: he was usurping the presidency.  Pressley’s label is merely another way of saying – much like a kindergartner complaining she is not getting her way – she doesn’t like the result of the 2016 election.  Sheesh, lady… grow up or take a nap.

Recently, the clique held a news conference to “fire back” at some “tweets” from President Trump which they thought were offensive and racist.  These people seem to believe that, simply because they are “people of color,” anyone who disagrees with their ideas and policies – as opposed to their skin color – is automatically a racist.  Stupid.

They have morphed and converted their racial makeup into what amounts to an illegitimate ad hoc license to spew hatred, anti-Americanism and non-patriotic bile, and, thanks to the First Amendment – the ironic hypocrisy is patent – get away with it.  What could be more racist than contending that, simply because of your race, you are allowed to say anything to denigrate opposing views and do so not only with media impunity, but with praise from leftists, progressives and Alinskyites?  One is reminded of the intemperate high school Q and A:  Q: why does a dog lick itself?  A.: because it can.

As proof of the hatred for the nation infused into these people’s DNA, not one of them came forward to condemn the recent firebomb attack by an Antifa radical on an Immigration and Customs Enforcement (“ICE”) facility in Tacoma, Washington.  Watch the video… it is illuminating.

Liberals used to say that if you are not part of the solution, you are part of the problem.  The corollary to that observation is that a failure to condemn is to condone.   Accordingly, it is a bit difficult to conclude that the Squad has America’s best interests at heart.

With the Democrat Party and the loons therein vying for the right to lead the nation over the cliff by engaging in every tactic possible to convert the shield of the Constitution into a dagger plunged into the country’s abdomen, ask yourself this: does it make any sense at all to vote in 2020 for any Democrat politician anywhere, let alone for president or for a seat in Congress?

If your answer was “yes,” you need to go take a nap.