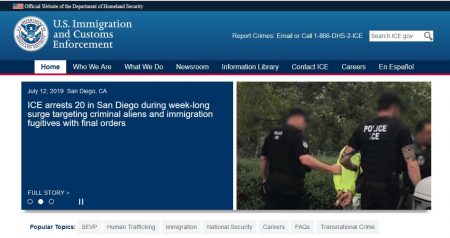 Knowing the whole truth (the facts) and then trying to watch the big three network news broadcasts – even those of their local affiliates – makes one want to scream.  The most recent, glaring example is their collective treatment of this weekend’s ICE raids.  We are dutifully informed that Trump and his team have called for this to be done and thousands will be involved.  Against the background of previous, deliberately slanted “reporting” that the same team is keeping kids in cages and splitting up families, the reporting on the ICE raids infers that innocent poor people are being sought out to be apprehended and deported by mean-spirited Trumpists.

That inference gains traction in folks’ minds because the “reporters” (news readers) deliberately fail to inform their audiences that only folks who have had their cases heard in two different courts, with the aid of defense counsel, and whose deportation has been ORDERED BY THOSE COURTS, are the current targets for removal.  Rather than innocent families being ripped up and sent back, every case has been dutifully adjudicated and found wanting.  And not all of those ordered deported by the courts are “asylum-seekers”; others are convicted felons.  Are we to believe that our courts are corrupt?  Hardly.  The law is the law and violations of the law require action by law enforcement officials.

But the public mind has been so poisoned that some elected officials are fearful of losing public support (and re-election) if they don’t prohibit law enforcement officers under their jurisdiction from cooperating with ICE.  Such is the case in New Jersey where county sheriffs are considering suing the Attorney General who insists they disobey the court orders and work against ICE.

The immigration crisis has been long developing.  It didn’t start with Trump – and it is being actively aided and abetted by leftist groups here in the US who provide aid and assistance to the coyotes, smugglers, and just plain folks from Latin America who are being invited (lured?) and instructed on how to game their illegal entry with the US Immigration and Customs officials whose duties require them to enforce US immigration laws.  Our immigration folks are doing the jobs that they take an oath to faithfully execute, and yet they are demonized by liberal politicians who not only distort facts, but outright lie.  And the media – with their visceral hatred of President Trump – have become willing accomplices in this widespread, deliberate, deception.

Public opinion is swayed because most folks are too busy or preoccupied to seek out the whole story behind the news they are being fed.  They come home from work, eat, flip on the TV and get only the part of ANY story that the left-leaning media want you to see and hear.  Such is dishonest, but that, unfortunately, is how it is.

One can only imagine the frustration of our immigration officials and their families being vilified – erroneously and grievously – by the mainstream media and by dishonest liberal politicians.

Of course one’s heart goes out to the downtrodden and those less fortunate and especially “… the children…”    But we have borders and we have laws to protect them for good reason – and if those dishonest politicians who play this tawdry “sympathy” card truly cared, they would work with the executive branch to amend the statutes.  But, hey, that takes work, and vilification is so much easier and “fun.”

Someone has a column today with a headline to the effect that liberal leftists hate Trump more than they love our country.  Intentional blindness!  Most unbecoming and most Un-American!

True, but Intentionally Misleading. Welcome to the Mainstream Media added on Sunday, July 14, 2019

One Response to "True, but Intentionally Misleading. Welcome to the Mainstream Media"