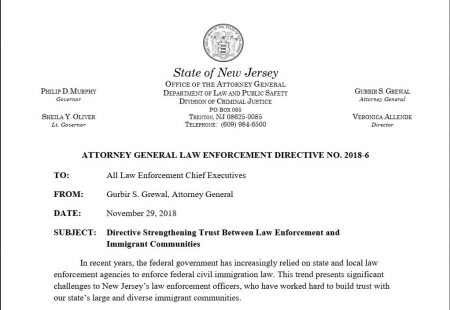 (Jul. 14, 2019) — Earlier this month, your faithful servant offered this post: https://www.thepostemail.com/2019/07/08/why-does-america-need-foreign-enemies-when-it-already-has-the-democrats/.  The point of the offering was that the Democrats in Congress and in the various “sanctuary” states and municipalities nationwide seem to be doing everything in their power to undermine the rule of law and facilitate the aiding and abetting of crimes perpetrated at the hands of illegal aliens.

The argument can now be made that they are actually aiding and abetting the violation of federal immigration laws and, in many cases, becoming accomplices in crimes committed by illegal aliens.   Each day, the evidence piles up that the Democrats not only hate President Trump, they despise all law-abiding Americans.  And, since you are reading The P&E, that means you, too.

Case in point.  While New Jersey is not formally a “sanctuary” state, it is becoming a de facto haven for criminal illegal aliens.  And when local sheriffs there sought to continue contractual agreements with federal authorities (so-called “287(g)” agreements) to assist in making sure that if a criminal in local custody was an illegal alien, Immigration and Customs Enforcement (“ICE”) personnel were alerted of any impending release of the person on bail or otherwise, New Jersey’s Attorney General – Gurbir Grewal – took exception.  New Jersey officials under Grewal complained that local sheriffs in certain counties were circumventing Grewal’s “Immigrant Trust Directive.”  Never mind that the directive forbids local law enforcement from assisting or cooperating in any way, shape or form with ICE.

The manifesto thus seems to have zero objective of doing anything which could operate to deter or prevent crimes committed by illegal aliens from happening in the first place.  This is the same stupid excuse coughed up by all Democrat-headed states and municipalities to promote lawlessness and justify handcuffing law enforcement personnel in order to frustrate ICE.

The New Jersey AG’s edict seems to have been patterned on the approach taken in San Francisco when, in July of 2015, because local law enforcement authorities were precluded from informing ICE agents of the impending release of a five-time deported alien criminal – Jose Zarate – from local custody, Kate Steinle was shot and killed by him.  As a parenthetical, the killer was in some places identified as “Juan Francisco Lopez-Sanchez” while in other places listed as “José Inez García Zárate.”  Apart from the potential that this would seem to also indicate ID fraud on his part – yikes… imagine that from an illegal alien – the bottom line is that he killed Kate Steinle, and that a San Francisco jury acquitted him.  Tell me again how great California has become. Kate Steinle’s last words on this planet were directed to her father, who was holding her as her life slipped away on San Francisco’s Pier  14: “Help me, daddy.”

Kate Steinle’s cry for help has a parallel in the approaching 2020 general election.  The nation where Kate died is now crying for help, pleading for its rescue from the hate-driven, Trump-despising and, yes, stupid blob of knuckle-dragging intellectual troglodytes called “Democrat politicians.”  These people care more about protecting the rights of “undocumented future motor-voter Democrat” aliens than they care about the safety of law-abiding Americans … and law-abiding lawful non-citizen residents.  All they care about is political power.  Do not fall for the snake oil and Kool-Aid “chaser” they offer as the excuse for their radical, lawless and, yes, stupid policies.

Just as Jeffrey Epstein may finally have to “face the music” for his past “massages” by his underage victims, so, too, should the Democrats have to face the consequences of their dangerous, misguided and – let us again say it together: stupid – policies and anti-American rhetoric.

And speaking of Monsieur Epstein, the question of Slick Willie’s relationship with him should prove interesting.  Rest assured, P&E reader, we will ultimately be told by the Democrats’ media propaganda allies that Bill Clinton’s several documented trips to Epstein’s Caribbean island on the “Lolita Express” were totally innocuous.  How could you think otherwise?  Even though Clinton was there (it is difficult to get around the flight logs and passenger manifests), we will be assured that he spent all of the time inside the plane on the airport tarmac discussing grandkids and golf with the pilot…, much as he did in Phoenix with Loretta Lynch back in 2016.

Faithful P&E reader, go back to the preceding paragraph and look at the priceless expression on Bill Clinton’s face when a reporter started to question him on his trips to Epstein’s island.  With any kind of luck, the electorate will awaken before the next general election to the fact that Democrats have been lying to them for too long and have finally forfeited any claim of right to govern a free people in a constitutional republic such as ours.

And then, the look on Slick Willie’s face will be replicated on the faces of Chuck Schumer, Nancy Pelosi, Jerrold (“No Neck”) Nadler, Adam Schiff, AOC, Bernie Sanders, Rachel Maddow, etc. etc. on the morning of November 4, 2020 when the returns come in confirming (a) President Trump wins a second term; (b) the Senate stays in GOP control; and (c) the House is returned to GOP control.