“TRYING TO BREAK THE SYSTEM”

(Jul. 14, 2019) — On the July 14 edition of “Sunday Morning Futures,” host Maria Bartiromo’s first guest was Lindsey Graham (R-SC), chairman of the Senate Judiciary Committee.  Along with Vice President Mike Pence and other U.S. senators, Graham on Friday visited a border facility housing illegal aliens which he said is “overwhelmed” and holding hundreds of single-male arrivals with criminal backgrounds.

Also in attendance was DHS Acting Director Kevin McAleenan, who has been accused of leaking plans for deportations taking place this weekend in a number of cities.  McAleenan denies the claim.

Reporters accompanied the entourage. CNN quoted Pence as having commented, “I was not surprised by what we saw.  This crisis is real, the time for action is now.” Later Pence claimed CNN’s coverage to be “dishonest.”

Pence visited sites at McAllen and Donna, TX, USA Today reported.  According to a Washington Post reporter, the paper said, “Almost 400 men were crammed inside fenced-off rooms in a facility with white-brick walls and high ceilings. Some men slept on concrete without pillows or mats. The men did not have cots, reporters were told, because there was not enough room for all to lie down. Instead, they were given thin Mylar blankets, which reporters heard crackling in the room, reflecting the facility’s lighting. Another 275 women were housed outside in air-conditioned tents repurposed from the Army.”

Some critics and Democrat members of Congress have accused the Trump administration of operating “concentration camps” to hold illegals and of “separating families.”  On Friday, four freshmen congresswomen testified to the House Oversight Committee about conditions they observed during a recent border visit, with one appearing to shed tears over the plight of those in the detention centers.

As for the second site visited, one holding families with small children, USA Today reported better conditions. “Reporters were guided through one room in the facility where they saw small children and their parents lying on the floor. Children told Pence they traveled by foot from Central American countries over a two or three month-long journey. Some small children, all under the age of 8, were on a bench in front of a television watching a Spanish cartoon and eating snacks. An agent watched the room from a guard tower-like structure above.”

Of the male detainees in McAllen, Graham told Bartiromo, “We’re not gonna let ’em go…We released 52,000 people into the interior of the United States from that one station alone.” He emphasized that illegals housed there now who are known to have committed prior crimes will no longer be released into U.S. cities and towns as a result of facility overcrowding.

Early Sunday morning, Fox News reported that anticipated “raids” conducted by the Immigration & Customs Enforcement (ICE) agency began on Saturday evening.  As the interview with Graham began, Bartiromo asked about “some Democrats and liberal mayors trying to stop the ICE officials and Border Patrol from carrying out their directive.”

A clip played on Sunday morning’s “Fox & Friends” showed the mayors of Denver, Chicago, San Francisco and Atlanta stating publicly that they disagree with the scheduled deportations and have resolved to provide “sanctuary” to those who entered the country illegally.  On the same broadcast, Acting ICE Director Matthew T. Albence said that the targets of the “raids,” a term to which he objected, were ordered removed from the country after they ignored final orders of deportation from an immigration judge.

The vast majority, Albence said, did not appear for scheduled asylum hearings.

“Not only are they trying to stop people from being deported who’ve had their day in court and lost…, but the ICE raids today are focused on criminals who’ve gone to court and lost their case,” Graham told Bartiromo. “Democrats are also advocating decriminalizing entry into the United States and providing free health care to illegal immigrants once they get here.  They’re becoming the party of open borders and free health care; you can’t deport somebody who lost their court case.  This is insane; it’s going to blow up in their face, and it’s really doing damage to our country.”

In the wake of the oncoming deportations, Speaker of the House Nancy Pelosi tweeted advice to illegals on Sunday morning, invoking the Bible: 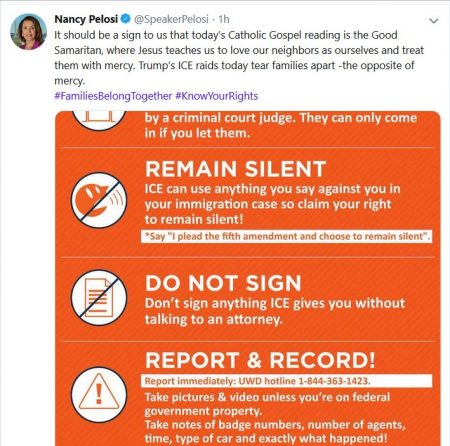 Graham said his visit revealed “a system completely overwhelmed for no good reason.”  Referring to the 1997 Flores decision, Graham said that “families” cannot be processed for admittance to the U.S. or rejection within the 20-day period mandated by the settlement, which he hopes to change with legislation he has introduced.

He also denounced what Bartiromo described as “renting” children among would-be border-crossers with the belief that a child in tow will ensure their ability to stay in the U.S. long-term.

He praised the work of the Border Patrol and said he plans to introduce a resolution reinforcing that sentiment.  “What I saw is a bunch of people who have been here before, broke the law before, and we’re not gonna let ’em go.  I don’t care if they have to stay in these facilities for 400 days; we’re not gonna let those men go that I saw; it would be dangerous,” he said.

To Bartiromo’s question, Graham affirmed that a report he saw stated that those detained include individuals from African and Middle-Eastern countries as well as Central America.

“This is not a concentration camp that I saw; it is a facility overwhelmed,” Graham said, accusing “Democrats” of “trying to break the system so that we let these people go.”

One Response to "Graham on Illegal Aliens: “We’re Not Gonna Let ‘Em Go”"