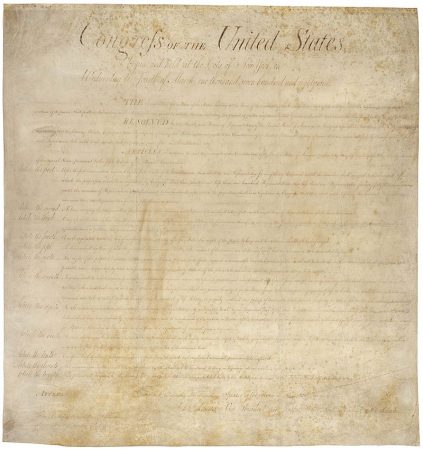 (Jul. 11, 2019) — “Good evening, ladies and gentlemen, and welcome where only the truth is allowed: ‘The Pulse of the Nation.’ Hello, my name is Roving, as in Roving Reporter (RR), and I’ll be your host while we interview our neighbors as they hustle off to the big city, as we stand on our corner, under the awning, across the street from the railroad station. Excuse me, Miss, care to be interviewed on live TV? Roving here for ‘Pulse.’”

“For sure, Roving. Couple of years ago you interviewed a neighbor of mine, a Marine who married a Japanese Geisha girl. My name is Lea and I’m a proofreader for a greeting card company and I watch your show, along with my dog, Sparky.”

“Welcome to the show, Lea, and I’ll wave to Sparky. Okay, here’s the question: how important is the Bill of Rights to you, and what would you do to defend those rights?”

“You’re kidding? What in the heck do you think we have an Army for, Roving? And when those men and women join up, they take an Oath to the Constitution and to not follow illegal orders, which is why the Democrats won’t hire ex-military as police officers.”

“A military person knows not to follow illegal orders, okay?”

“And a policeman doesn’t?”

“A police officer will do whatever they’re told or else they’ll lose their job; that’s how it works. A military person may very well lose his life by following an illegal order. Look, ever been in combat, Roving?”

“Then you know the difference between doing what is lawful and what is not lawful.”

“Well, in field conditions the line can sometimes be blurred, but if it’s any consolation, most of the time not following illegal orders is the best option, and that’s speaking from hands-on experience. But look, every situation is different, is fluid and can be right or wrong, but when it’s wrong you can bet Americans got killed. Am I making any sense?”

“So you were in the military, right?”

“You never became a General, did you?”

“Generals believe that, whatever the order, because a General issued it, the order, irrespective of being legal or not, must be carried-out. Isn’t that right?”

“Maybe not, but probably close enough, and for proof just look at our spineless Joint Chiefs of Staff who allowed LTC Terry Lakin  to be railroaded in a kangaroo Court-Martial.”

“Okay, and look who’s here but none other than our favorite General.”

“Attention! Hand salute. At ease, soldier. You’re out of uniform, did you know that? Where’s your cover?”

“Hat; cover. You’re on report; got a pen? I misplaced mine.”

“Well, now, how do you expect to go on report if I can’t write you up? You’re one lucky grunt. As I stood in the shadows, while you were interviewing your previous guest, I diagrammed our first two Amendments; see here, on my chalkboard?”

“Very impressive, General. Is there a reason why you listed the Second Amendment before the First?”

“Isn’t it obvious? I’m a General; therefore, I think guns, have guns, and sleep with guns: we need guns. Look, all of the rest of the Bill of Rights and the Constitution wouldn’t be worth a hill of beans if it weren’t for the people’s right to defend itself from a tyrannical government.”

“Well-said, General. So, this Omar character from Somalia, who is now in our Congress, wants to issue a gag order on criticizing her and, by proxy, Islam.”

“What a perfect example of poster child for the definition of America’s enemies. She’s got ignorance in spades, and it would be funny if she didn’t have a bunch of like-minded, mentally-challenged individuals in her corner. Look, I don’t like anybody who is anti-Semitic, understand? They used to go after the Jews first, and then the Christians, but nowadays they’re going after all of us who are not Muslim equally: beheading people on prime-time TV. They’re sick and so is she. Look, I’ve got to get to a shooting range; nice to have talked with you.”

“And off he goes, pushing his chalkboard down the sidewalk. Let’s take a break.”

“And we’re back and it just started to rain.  We’re huddled under the awning, so I’ll just say in America we have not only the right, but the duty to speak up and express ourselves whenever we see something wrong, and anybody trying to shut me or any other American up for not speaking the truth, especially about the scourge that is Islam, can kiss my grits.

“And so, on behalf of the crew, I’ll be wishing you all a goodnight: Goodnight.”

“Good show; let’s get out of this rain; burger time: my treat.”