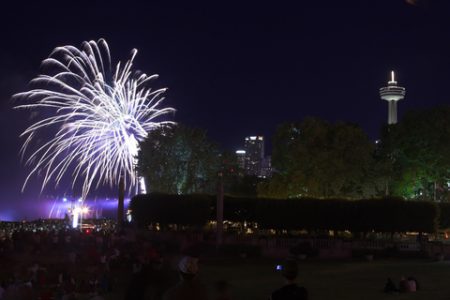 (Jul. 5, 2019) — “Good evening, ladies and gentlemen, and welcome to what has become, at least in some circles, a controversial informative television show: The Pulse of the Nation. We have been accused of many things, but being on-the-fence isn’t one of them. When a neighbor asked me if I was going to watch the fireworks down at the lake and I said no, he thought I was being, somehow, unpatriotic, and said so. The truth of the matter is, I saw fireworks for real and had no desire to tempt the nightmare bogyman that hides, every night, under the bed. So I didn’t say anything, but I did tell the wife that I never got to march in a parade while in uniform, so she said I could march in the Veterans’ section of the parade if I wanted to. I was talking about dogs and she mentions cats, so what’s the use of trying to explain it? Not to be rude, but what’s the point?

“Some say it’s water over the dam; some say the horse has left the barn, but I say the past can’t be manipulated to suit the flavor of the day. Since I’ve returned back to The World after surviving people trying to kill me, I’ve met a number of my high school classmates, guys that I grew up with, guys that I spent ten years getting to know. Guess what? While they went to college, I went in the armed forces of our country and actually put myself in harm’s way, for real, as in ‘if I don’t pull this off I’ll get killed’ type of real-world situation. One time I had a knife at my throat and here I am, sitting in front of a laptop, telling you about it.

“What’s the point? You ask. Well, I’ll tell you. If you want to hear America’s greatest philosophers of our time, don’t bother asking a professor of Philosophy; no, don’t bother. If you want the straight skinny on what any situation is on any given subject at any given time, just ask a PFC or a Navy Seaman and they’ll tell you, in just a few words, what the situation is. Mind you, there’ll be no effort made to be politically correct, mixed-company correct, or even Department of State correct, but it will be correct.

“Now that I got that off my chest, allow me to introduce myself: I’m Roving, as in Roving Reporter (RR), and I’m standing under an awning, on a corner, across the street from the railroad station about to waylay any commuter going to the big city. The only problem is that everyone seems to be taking the day off. What do you say we just go look for someone? Hey, you, there, excuse me, but would you like to be interviewed on live TV? Roving here for ‘Pulse,’ the ever-popular news show.”

“Oh, okay; I guess. To tell the truth, I used to watch you, but you got boring, always talking about the threat to Western Civilization and how Germany and Sweden are no longer the Germany and Sweden of yesteryear, and that England is going down the tubes. Didn’t you call London ‘Londonistan?”

“So it’s boring, that’s what. Why don’t you talk about something else?”

“So you want me to talk about a bunch of flaming idiots, people who think that a failed system of government, Socialism, will be beneficial for our grandchildren? What are you, an employee of Fox News? Are you one of those who invites a Democratic strategist on the show to, what do you say, make it ‘fair and balanced?’”

“I think you do. I think you’re afraid to say so, afraid of being exposed for the hypocrites that you are. Did you or did you not hire Donna Brazile?  I rest my case. Name a subject. What about the Federal Reserve; what about the Feds pumping $35 billion a month into the economy to keep the stock market from crashing from Obama’s destructive economic policies, ideas he, no doubt, got from that idiot communist Saul Alinsky?”

“But you are on TV. You’re not one of those ANTIFA goons, are you? Tell me, any thoughts on how the Deep State is trying to manipulate your mind by the commercials you see on TV? Any thoughts on that?”

“Well, they were one way before Obama got elected and as soon as he took the oath of office they changed overnight; yes, I did notice that.”

“That’s good, but did you notice anything else?”

“I noticed that after Trump took the oath of office they didn’t change back; matter-of-fact, they just got, well, they just got more so, if you know what I mean.”

“We know exactly what you mean; thank you for being our guest. Excuse us while we break for a commercial.”

“Okay, we’re back with a young lady off to the big city. The next train isn’t for a few minutes, so what’s your name and what’s your peeve of the day?”

“’Peeve of the day?’ I like that. I’ll tell you: what they did to that reporter in Oregon was despicable, is what I think. A couple of years ago there was this presidential candidate who said that all policemen should be ex-military, and now I know why: they wouldn’t have stood around looking like a bump on a log while people were attacked and beaten-up by a bunch of traitorous lowlifes, that’s what.”

“That’s right: if any group of people would know the Constitution, it would be those who put their lives on the line for it. Look at what happened in Baltimore a few years ago, right there on television for all the world to see, and in Ferguson, MO. That’s what you get when you have a stupid mayor and not one cop a Veteran, just like in Oregon.”

“Or anywhere else these days.”

“Right. So what’s your name and what are you up to? The reason I ask is that we’re looking for a new secretary back at the office. We’ve had a number of complaints that the songs we use in the transcripts have been repetitive. I mean, we can’t run the TV commercials so we fill in by using some music.”

“I could do that. My name is Anita and I’ll just go on down to the office and apply for the job.”

“Okay, we’ll finish up here after one more interview and you can ride back with us, unless you want to take the train: your decision. Excuse me while I get back to work. Hello, sir, care to be interviewed on live TV?”

“Oh, I know who you are, we all know who you are. Why, you’ve been on this corner for, what, five years? Name is Joe and I’m retired. Used to watch your show with the cat, but we can’t find you anymore so I read the transcript out loud for Sparky, my cat. Wife died, you know, so it’s just Sparky and me.”

“I’m sorry to hear that, Joe. What are you retired from?”

“I was a Democratic strategist, is what I was.”

“I tell you, this job gets weirder and weirder.”

“Oh, it’s nothing; sorry about that. So, what was it like doing what you used to do?”

“It was a riot, is what it was. Every day was something new. We told our candidate what to think, is what we did. Sometimes we told them to tell one group one thing and then another group, not an hour later, something entirely different, but then along came these hand-held phones with recording devices so we couldn’t get away with stuff like we used to.”

“When you say ‘candidates,’ what do you mean by that?”

“It’s shop talk, is what it is. You see, a politician is never secure, no matter who they are or what their elected office is: ergo, they’re a candidate in perpetuity, hence: candidate in lieu of a political office.”

“The joke was ‘running from the next subpoena,’ and many times they were.”

“You’re a funny guy, Joe, and thanks for being on ‘Pulse.’ Folks, that’ll do it, and so, on behalf of the crew, I’ll be wishing you all a goodnight: Goodnight.

“Good show. You know, she’s right: all our police should be ex-military. Hey, Anita, we’re leaving; burger time: my treat.”