FROM ONE GOVERNOR TO ANOTHER 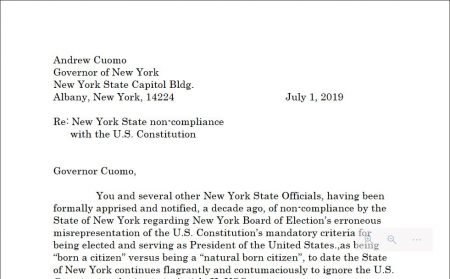 (Jul. 1, 2019) — On Monday, New York State citizen and registered voter Robert Laity sent a letter to Gov. Andrew Cuomo bringing to his attention an inaccurately-stated presidential eligibility criterion on the website of the New York State Board of Elections (NYSBOE).

In response to our article published Saturday generated by an email Laity sent to the NYSBOE on Friday, early Monday morning Laity said he would contact the governor as a result of what he sees as “the recalcitrant refusal of the State to conform with Federal criteria with regard to electing our President” over more than a decade.

Laity’s contacting the NYSBOE last week was one of multiple attempts he has made since 2008 to correct the stated citizenship requirement for the nation’s chief executive of “born a citizen” to “natural born Citizen,” as Article II, Section 1, clause 5 of the U.S. Constitution requires.  The email was copied to the New York State Supreme Court Appellate Division, The New York Daily News, the Enforcement Council of the BOE; and this writer.

The Post & Email’s inquiry to the election agency approximately two years ago about the misstatement received no response. 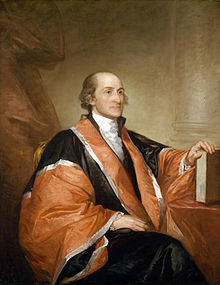 The Framers delineated the presidential citizenship requirement of “natural born Citizen” from that which is stated for U.S. senators and representatives.  Article I states that senators and representatives must simply be “a citizen of the United States” for seven or nine years, respectively, and “an inhabitant” of the state they wish to represent in Congress.  The “natural born” restriction was placed in the Constitution after Constitutional Convention president George Washington received a letter from the future governor of New York and U.S. Supreme Court Chief Justice, John Jay, dated July 25, 1787. In his letter, Jay wrote, in relevant part:

“Permit me to hint, whether it would not be wise & seasonable to provide a strong check to the admission of Foreigners into the administration of our national Government, and to declare expressly that the Command in chief of the american army shall not be given to, nor devolved on, any but a natural born Citizen.”

With a subject line of “New York State non-compliance with the U.S. Constitution,” Laity’s letter begins:

You and several other New York State Officials, having been formally apprised and notified, a decade ago, of non-compliance by the State of New York regarding New York Board of Election’s erroneous misrepresentation of the U.S. Constitution’s mandatory criteria for being elected and serving as President of the United States.,as being “born a citizen” versus being a “natural born citizen”, to date the State of New York continues flagrantly and contumaciously to ignore the U.S. Constitutional criteria in Article II, USConst.

Further, Laity chastised the NYSBOE for what he said is a “derogation of New York’s own election laws,” with a reference to New York Consolidated Laws ELN Section 6-122, the full wording of which reads:

A person shall not be designated or nominated for a public office or party position who (1) is not a citizen of the state of New York; (2) is ineligible to be elected to such office or position; or (3) who, if elected will not at the time of commencement of the term of such office or position, meet the constitutional or statutory qualifications thereof or, with respect to judicial office, who will not meet such qualifications within thirty days of the commencement of the term of such office.

Laity concluded his letter with:

In closing, I wish to formally reiterate what a “Natural Born Citizen” is, per several U.S. Supreme Court decisions.

In Minor v Happersett, USSCt. (1874) the court unanimously agreed that a Natural born citizen was a person born in the United States to parents who were both U.S. Citizens themselves. I demand that you take proper corrective action to remedy New York States continuing non-compliance to federal requirements and criteria. I also hereby inform you that Kamala Harris and Tulsi Gabbard are not “Natural Born Citizens” of the U.S. pursuant to the aforementioned referenced U.S. Supreme Court precedents.

The letter can be read in its entirety here: Andrew Cuomo