Judicial Watch: There was “Collusion” Between Mainstream Media and FBI in Russia Probe 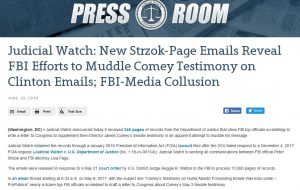 (Jun. 20, 2019) — Judicial Watch President Tom Fitton appeared on “Hannity” Thursday night to report that newly-released emails between former FBI employees Peter Strzok, Lisa Page and others show “collusion” between The New York Times‘s Michael Schmidt and the FBI in relation to the Trump-Russia “collusion” probe, among other “reporters.”

Although his appearance lasted less than three minutes, Fitton said that one email depicts Schmidt providing the FBI a “heads-up” about an article he planned to publish the following day.  Several other examples of journalists coordinating with FBI personnel are contained in JW’s report.

“Judicial Watch announced today it received 345 pages of records from the Department of Justice that show FBI top officials scrambling to write a letter to Congress to supplement then-Director James Comey’s Senate testimony in an apparent attempt to muddle his message,” the press release begins.

In the following segment, Rep. Mark Meadows said that media coordination with the FBI violated “protocols” and “planted false narratives” to bolster the justification for the Russia investigation led by Special Counsel Robert Mueller.

“What we learned today from the Judicial Watch papers is that you actually not only had the circular reporting…we now have something new in the chain, and that is you have reporters basically spying on people and taking it into the FBI, probably in exchange for favors,” Rep. Devin Nunes said during the same segment.

On Wednesday and mentioned by Meadows and Fitton, The Hill‘s John Solomon reported that the individual who became Mueller’s chief deputy in the Russia probe, DOJ prosecutor Andrew Weissmann, and other DOJ/FBI officials met with four Associated Press journalists on April 11, 2017, during which the reporters shared research they had conducted on Manafort.  The summary of the meeting indicated that “they appeared to have a good understanding of Manafort’s business dealings.”

Manafort is serving an 81-month sentence for reportedly failing to pay taxes and other crimes.

Judicial Watch: There was “Collusion” Between Mainstream Media and FBI in Russia Probe added on Thursday, June 20, 2019