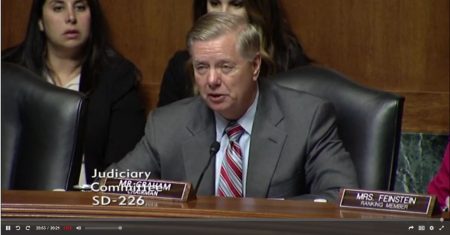 While introducing the witness, Graham read from statistics from fiscal year 2019 showing that in five categories, the numbers of illegal aliens crossing the Mexico-U.S. border has dramatically increased and in some cases, doubled.

Live streaming of the committee hearing is here:  https://www.judiciary.senate.gov/meetings/the-secure-and-protect-act-a-legislative-fix-to-the-crisis-at-the-southwest-border

Graham’s aides held up a prop displaying those figures, which show that more than 144,000 illegals were apprehended at the border in May.

Graham recently introduced a bill aimed at closing loopholes in current immigration law which he explained in his preamble. “I’m trying to say, for a period of time here, have a time-out under the current system,” he said.

His proposal includes “changing the Flores agreement,” which mandates that illegal-alien children cannot be held in detention for more than 20 days; Graham wants that period extended to 100 days.

Graham said the bill will be “marked-up” next week.

After Graham finished his remarks, ranking member Dianne Feinstein (D-CA) welcomed McAleenan, then said that the “number” of people crossing the southern border is not as significant currently as “who is coming.”

Feinstein read statistics she gleaned from U.S. Customs & Border Protection Acting Director John Sanders, who reportedly told her that detention facilities for unaccompanied children are lacking basic accommodations and are experiencing problems with food spoilage in some instances.

Feinstein has proposed her own immigration bill which she said would provide that “prolonged detention” not be imposed on “families” who cross the border.  It also proposes adding “450 staff to our immigration courts” to hear asylum petitions more efficiently.

She stressed that “the basic rights or children” should be protected.

“I really strongly feel that whatever we do should be bipartisan,” Feinstein said, stressing that children and parents should not be “separated.”

The Trump administration indicated with an executive order that it wished to cease separating families one year ago.  Illegal immigration was a major plank in Trump’s 2016 campaign and finding a solution has been a hallmark of his administration despite Congress’s inaction.

On Friday, Trump announced that an agreement with Mexico was reached such that Mexico will take steps to stop the flow of “migrants” from Central America to the Mexico-U.S. border.  Had the agreement not been reached, Trump planned to impose a 5% fee on all imports from Mexico.