Bartiromo to “Break the News” on Classified Information 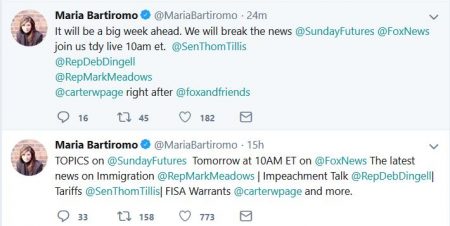 (Jun. 9, 2019) — At approximately 9:00 a.m. EDT, “Sunday Morning Futures” host Maria Bartiromo tweeted that she expects a “big week ahead,” listing a number of guests to include Carter Page, who was the subject of four DOJ/FBI FISA warrants which may have been unjustifiably obtained.

Bartiromo had hinted at the show’s content on Saturday night.

In a FISA warrant application dated October 21, 2016, Page, a U.S. Naval Academy graduate and entrepreneur, was said to be an “agent of a foreign government,” namely, Russia.  By the time he was placed under government surveillance, Page was no longer an advisor to the campaign, and although monitoring of his communications continued for a year, he was never charged with a crime.

In 2016 the FBI opened a counterintelligence investigation into the Trump campaign on the basis that someone within the organization was engaged in a conspiracy with the Kremlin to tip the election in Trump’s favor.  Transcripts from closed-door interviews by members of Congress indicate that the probe began sooner than the FBI’s officially-provided date of July 31, 2016 and that three others in addition to Page were the subjects of some type of surveillance.

Following former FBI Director James Comey’s dismissal in May 2017, another former FBI director, Robert S. Mueller, III, was hired to serve as “Special Counsel” to complete the FBI’s counterintelligence probe, which morphed into a criminal investigation of a myriad of Trump campaign and White House associates. Working with approximately 40 FBI agents and 19 prosecutors, Mueller’s office indicted 37 entities and individuals collectively, the majority of whom were Russian and will likely not face prosecution in the United States.

Fewer than ten Americans were charged with and pleaded “guilty” to “process” crimes, although former Trump campaign manager Paul Manafort is serving 81 months in prison for convictions on eight federal convictions.

Bartiromo has been aggressively followed the Russia “collusion” narrative and has frequently interviewed guests who provided exclusive information pertinent to Mueller’s investigation.

In April, Mueller’s report was made public by Attorney General William Barr, with some redactions to protect ongoing investigations, sources and methods. While congressional Democrats were quick to say they would continue their own investigations, particularly focusing on an “obstruction of justice” allegation against the president, some Republicans have begun to question the reliability of the report given that it appears to contain several key omissions and does not cite the sources of many of its conclusions, as in the case of reported Russian breaching of the DNC servers in the spring of 2016.

Some who were questioned by Mueller’s team of reportedly aggressive prosecutors suffered serious medical incidents, a recent report by Paul Sperry of RealClearInvestigations states, while all incurred substantial legal bills imperiling their homes and livelihoods.

After having interviewed approximately 500 witnesses, served 2,800 subpoenas, and executed hundreds of search warrants, Mueller’s team concluded that there was insufficient evidence to support the contention that anyone within the Trump campaign, or any American for that matter, conspired with the Russian government to affect the outcome of the election.

On the issue of “obstruction,” Mueller was unable to reach a conclusion, and instead stated that investigators could neither recommend to the Justice Department a criminal charge of obstruction  nor “exonerate” the president.

On May 29, Mueller gave a nine-minute, unprecedented press conference wherein he said he would not testify to Congress, was resigning and closing his office, and if his team could “had confidence that the President clearly did not commit a crime, we would have said that.”

Bartiromo’s show begins at 10:00 AM EDT and, according to her tweet, will feature Reps. Mark Meadows (R-NC4) and Debbie Dingell (D-MI12) As well as Sen. Thom Tillis (R-NC) and Page.

In a preview on “Fox & Friends” at approximately 9:26 a.m. EDT, Bartiromo said that documentation connected to the Russia investigation the president gave Barr authority to declassify will be “revealed” “this week.”  She said that Meadows will “go through some of the expectations that we’ll see” in regard to the records.

She will also discuss “how some of the things in the Mueller report have been discredited,” she told the three co-hosts.

Bartiromo to “Break the News” on Classified Information added on Sunday, June 9, 2019

One Response to "Bartiromo to “Break the News” on Classified Information"