WILL THERE BE “A DURABLE SOLUTION”? 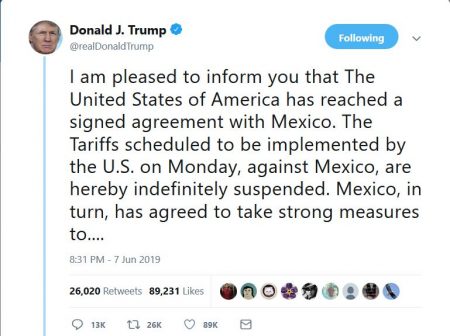 (Jun. 7, 2019) — On Friday night President Trump tweeted that the U.S. and Mexico have reached an agreement on steps to be taken to reduce or stop the illegal migration which has been overwhelming U.S. Customs & Border Patrol personnel over the last 8+ months.

“I am pleased to inform you that The United States of America has reached a signed agreement with Mexico,” Trump tweeted at approximately 8:40 p.m. EDT.  “The Tariffs scheduled to be implemented by the U.S. on Monday, against Mexico, are hereby indefinitely suspended.  Mexico, in turn, has agreed to take strong measures to….stem the tide of Migration through Mexico, and to our Southern Border.”

Trump added that “Details of the agreement will be released shortly by the State Department. Thank you!”

Last Thursday, Trump announced that a schedule of trade tariffs would be implemented Monday, June 10, if an accord were not reached and definitive action taken by Mexico to stop the thousands of illegal aliens trekking through its interior to the U.S. southern border in ever-increasing numbers.

As Trump was in Europe commemorating the 75th anniversary of the D-Day invasion in Normandy, France on Wednesday, Mexican officials were in Washington negotiating the framework of a potential agreement.  On Thursday, the Mexican government announced that it would place 6,000 federal officers on its border with Guatemala “by September.”

Despite that concession, Trump said “not enough” was being offered to stop the inception of the first tariff of 5% on all imports.  From there, the tariffs were to increase 5% at the beginning of each new month.

On Thursday, Carlos Gutierrez, Commerce Secretary under President George W. Bush, told CNBC he did not believe an agreement could be reached “over the weekend.”  “It takes a plan,” he said.

Some congressional Republicans opposed the proposed tariffs, including Sen. Ted Cruz (R-TX).  A study by The Perryman Group predicted that if the tariffs went into effect, it would cost the U.S. economy billions over a number of years and more than 400,000 jobs.

A press release from the U.S. State Department Friday night states that the two nations “will work together to immediately implement a durable solution” to the challenge of “the dramatic increase in migrants moving from Central America through Mexico to the United States.”

The statement includes a pledge for the U.S. and Mexico to “continue their discussions on the terms of additional understandings to address irregular migrant flows and asylum issues, to be completed and announced within 90 days, if necessary.”

Trump announced the imposition of the tariffs in the absence of congressional action to ameliorate what many, including the president and Obama DHS Secretary Jeh Johnson, have described as a severe “humanitarian crisis” given the tens of thousands of illegals crossing the border, many of whom require immediate medical attention.

At approximately 144,000, the number of illegals crossing the Mexico-U.S. border last month was the largest in 13 years, the Border Patrol reported Wednesday.