DUE TO ALLEGED SHORT-STAFFING 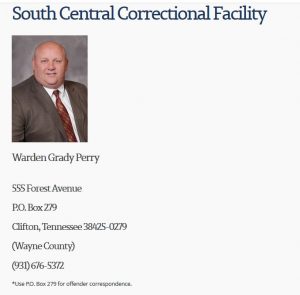 (Jun. 5, 2019) — The Post & Email is in receipt of a letter from an inmate at Tennessee’s South Central Correction Facility (SCCF) reporting that short-staffing has caused the situation whereby “the Assistant warden is working the prison pods…and other various areas regularly assigned to corrections officers or C/Os.”

Further, the inmate wrote, “There are less than 25 corrections officers working at the prison and staffing levels are so low that the inmates has almost taken over the prison…” [sic]

SCCF is one of Tennessee’s privately-operated prisons but is under the supervision of the Tennessee Department of Correction (TDOC).  According to a November 2017 prison audit conducted by the Tennessee Comptroller of the Treasury, staffing at the Trousdale Turner Correctional Center (TTCC) and Whiteville Correctional Center, also operated by CoreCivic, demonstrated staffing shortages (p. 7) which brought facility safety into question.

Over the last 3+ years, The Post & Email has received scores of letters from inmates at Trousdale describing dangerous and substandard conditions resulting from a shortage of staff, the introduction of contraband into the prison, and a number of alleged inmate deaths from illicit drug use.

The SCCF inmate who contacted us has provided information in the past which was corroborated by a report issued by WSMV in Nashville.  The pertinent part of his most recent letter reads:

His previous letters have described “dehumanizing living conditions” due to frequent “lockdowns,” diabetic patients failing to receive proper care for their condition, an assault of a female correction officer, and the water supply to a particular area having been “turned off without notice.”