Trump and May Hold Joint Press Conference in London 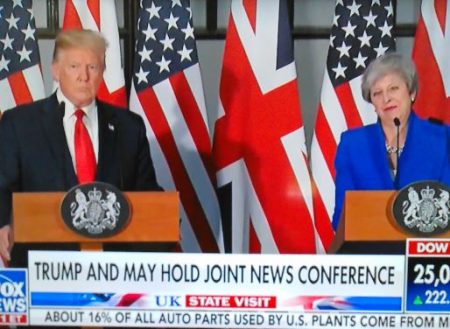 (Jun. 4, 2019) — President Trump and outgoing UK Prime Minister Theresa May held a 20-minute press conference on Tuesday afternoon local time, concluding at approximately 9:32 AM EDT, during which they discussed economic issues, the longstanding and “precious” relationship between the two nations, and whether or not Trump plans to meet with any of May’s possible successors during his three-day state visit.

May spoke first, followed by Trump, during which both praised the economic ties between the UK and the United States and mutual support of NATO.

After a short address, May, who will be leaving office on Friday, followed by Trump’s remarks of approximately the same length, May announced that she and Trump would each take two questions from members of the British and American media. The first question, from a British reporter, directed at both leaders, asked if Trump’s Twitter remark on Monday that London Mayor Sadiq Khan is a “stone cold loser” was appropriate as well as his thoughts on the “protests” allegedly taking place in response to his visit.

Khan, in turn, responded to Trump’s tweet on Monday by stating, “You stand for the opposite of London’s values.”

Trump told the reporter that Contrary to news reports, he saw only “a few” protesters just before arriving at the press conference and that large numbers of people were expressing their support for his visit. Invoking a term he often uses, Trump deemed the “protests” “fake news.”

As for Khan, Trump said that in his view, the London mayor is a “negative force” rather than a positive one and “is not doing a very good job.” For her part, May did not directly answer the question, but rather, said that the strong bonds between the two countries and looking ahead to the future should be emphasized.

A question from Fox News’s John Roberts, whose reporting Trump has criticized in the past, asked whether or not Mexico has taken sufficient action in response to the administration’s announcement on Thursday of a tariff schedule to be implemented beginning June 10 on products coming into the U.S.

Trump responded that in his view, Mexico has not taken action and confirmed that representatives from that nation will be meeting with members of the his administration on Wednesday in response to the tariff declaration.  Since taking office in 2017, Trump has said that Mexico needs to do more to reduce the flow of individuals from Central America and other countries through its own borders to the U.S., with reported record-breaking numbers of “migrants” now coming over the Mexico-U.S. border.

At approximately 9:52 a.m., Trump tweeted a video depicting him walking side-by-side with May the presser.

Trump and May Hold Joint Press Conference in London added on Tuesday, June 4, 2019