Republicans Must Lead on Climate Change

“CALLING A SPADE A SPADE” 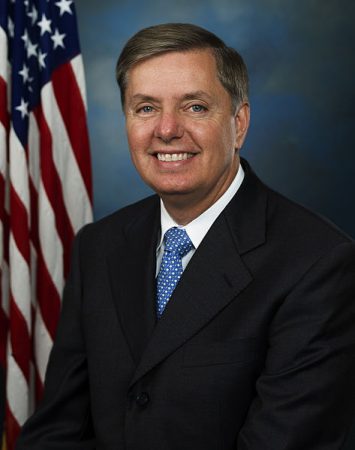 (May 31, 2019) — There have always been prominent Republicans prepared to support, or acquiesce to, the climate scare. It is a huge problem for President Donald Trump who understands, correctly, that concerns about dangerous man-made climate change are not based on solid science.

As early as 1990, President George H. W. Bush started the National Climate Assessment, which has been a continual thorn in the side of climate realists. Two years later, Bush signed the U.N. Framework Convention on Climate Change at the Earth Summit in 1992 in Rio de Janeiro. The treaty set the stage for the climate alarmist stance of the Intergovernmental Panel on Climate Change that led to the Kyoto Protocol and the Paris Agreement.

Today, we have Republicans such as Sen. Lindsey Graham (SC), U.S. Secretary of Energy Rick Perry, and the 23 House Republicans that belong to the bipartisan Climate Solutions Caucus (CSC) all boosting climate alarmism. George P. Shultz, who served on the Cabinet under three different Republican presidents, is listed first on the Advisory Board of the Citizens’ Climate Lobby (CCL), the group which backs the CSC.

Graham is especially aggressive on the issue, dismissing fellow Republicans who oppose climate alarmism at the April 24 EarthX2019 conference in Dallas. Graham told reporters about plans to develop climate change legislation in 2020 that would offer an alternative to the Democrats’ Green New Deal but “that would be good for the environment and good for business.”

Perry chimed in, boasting to conference attendees that the United States “continue[s] to lead in reducing energy-related carbon emissions. That’s something to be proud of… Back in Washington, people argue endlessly on what ‘clean’ or ‘cleaner’ means. Does it mean carbon-neutral or carbon-free?”

What really sucks is that, in the name of political correctness, these ostensibly conservative politicians say such incredibly stupid things in support of hugely expensive programs that will have little, if any, benefits to the environment. After all, Perry’s ‘carbon’ is really carbon dioxide (CO2), a colorless, odorless gas essential for plant photosynthesis and so needed for life. For that reason, CO2 concentrations inside commercial greenhouses are frequently maintained at up to 1,500 parts per million (ppm), a level at which plants grow more efficiently than in the outside air at 415 ppm. It is not worth spending anything at all trying to reduce the atmosphere’s CO2 content.

And, even if one accepts the flawed science underlying the climate scare, the Republicans’ 2020 climate change legislation would have to be far more severe than even the Obama administration’s Clean Power Plan (CPP) to have appreciable impact on climate. The Institute for Energy Research explained in 2014, “It turns out that if you use EPA’s MAGICC model, the impact of this rule (the CPP) would reduce the rise in global temperatures by only 0.137 degrees Celsius by 2100.”

And, yes, climate change is real. So is sunrise and gravity. That doesn’t mean that we cause them, or, in the case of climate change, if we do contribute, that our impact is in any way dangerous. After all, even NASA’s Goddard Institute for Space Studies asserts that the Global Annual Mean Surface Air Temperature Change from 1880 to 2017 is only just over one degree Celsius despite a supposed 40% rise in atmospheric carbon dioxide (CO2) content. And this modest warming has been a very good thing as we have pulled out of the Little Ice Age.

“Besides wanting to avoid the discomfort of being labeled ‘climate change deniers,’ and attempting to attract left wing voters, many Republican climate alarmists are apparently under the impression that they must follow public opinion on climate change,” said Marc Morano, publisher of the influential Washington DC-based Climatedepot.com. “They should follow President Trump’s example, and lead the public to a more realistic view of this important topic.”

Morano is right. In “Shifting public opinion on climate change: an empirical assessment of factors influencing concern over climate change in the U.S.,” published in 2012 in the journal Climatic Change, Drexel University, McGill University, and Ohio State University researchers demonstrated that the stated positions of politicians and other “elites” in society is the primary factor influencing public opinion. The study showed that when prominent Republicans worked with Democrats to support concerns about dangerous global warming, the public was far more supportive of this stance. However, following the Republican split with the Democrats on the issue in 2008, there was a quick reduction in the fraction of the public who “worried a great deal” about climate.

So, unless Perry, Graham, and the rest actually want the public to support climate alarmism, they should clearly state that Trump is right and, in his support, cite reports such as those of the Nongovernmental International Panel on Climate Change. These documents summarize thousands of studies from peer-reviewed scientific journals that either refute or cast serious doubt on the climate scare. Then Republicans can play their proper role of leading the public to a balanced understanding of this complex and important topic.

Indeed, Sen Graham, all Republicans must ‘cross the Rubicon,’ and start calling a spade a spade: the hypothesis that humankind significantly affects Earth’s climate through our use of fossil fuels is the biggest fraud ever perpetrated on society. The primary intention of this scam is not environmental protection but expanding government power, reducing individual freedom, and turning the world once again to failed socialism. That same socialism tyrannized the world throughout the past as it does now Venezuela, Cuba, and China. Attempts to convert from reliable coal, oil, natural gas, and nuclear power to flimsy and expensive power sources such as wind and solar to supposedly ‘save the climate’ is both ridiculous and dangerous.

Republicans Must Lead on Climate Change added on Friday, May 31, 2019