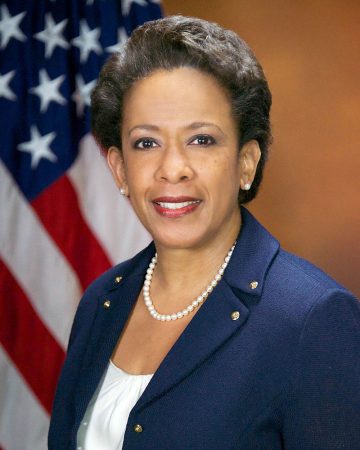 (May 29, 2019) — On page 158 of the transcript from former Attorney General Loretta Lynch’s closed-door testimony to members of the House Judiciary and Oversight & Government Reform Committees last December, Lynch told Rep. Steve Cohen that after then-FBI Director James Comey informed her that emails possibly pertaining to the Clinton email investigation were found on a laptop computer as a result of another investigation, she and then-Deputy Attorney General Sally Yates wanted to “stop” Comey from notifying Congress.

In what might be considered a stunning admission given her previous testimony that day, Lynch admitted that Comey’s history indicated to her that he would not follow a directive on the issue from her.

On October 28, 2016, Comey sent a letter to 16 congressional leaders stating that the Clinton email investigation would be reopened given that thousands of what appeared to be Clinton’s emails from when she served in the State Department were located on the laptop of now-convicted former congressman Anthony Weiner, then the husband of one of Clinton’s top aides, Huma Abedin.

Comey closed the initial probe on July 5, 2016 by providing a solo press conference without Lynch’s permission in which he stated that the FBI would not be recommending that Clinton or any of her aides be criminally charged for mishandling classified information.

On page 156, Lynch admitted that while she did not chastise Comey for his unprecedented press conference for which he was found “insubordinate” by the Justice Department inspector general last year, she “had concerns that at the time, that it violated policies with respect to talking about uncharged conduct, for example, and, at the time, issues of characterizations of certain types of conduct.” 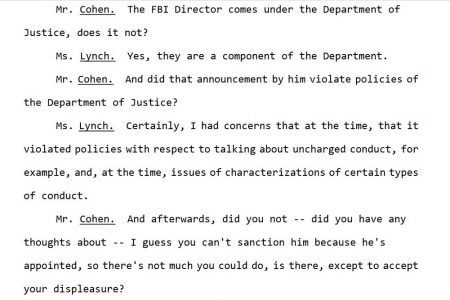 Although declining to recommend that Clinton be prosecuted by the Justice Department, Comey read a litany of transgressions he said she committed while utilizing the private, non-governmental server for four years during her tenure as Obama’s secretary of state.

Clinton, her aides, and Obama himself knew about the unauthorized server over which classified, top-secret and other sensitive government material was confirmed to have been sent.

Lynch additionally testified that Comey did not inform her directly of his plan to send Congress a letter about his decision to reopen the Clinton investigation.  “Well, staff reported –staff of the Deputy Attorney General reported to me, the Deputy Attorney General and a number of other people that the Director had informed–that the Director’s chief of staff had informed him that the Director was planning to send a letter, that he was ready to send it at that moment, or that morning,” Lynch told Cohen (p. 157).

Lynch said she and unnamed others “discussed” the discovery of the additional emails, made by the New York FBI field office between September 26 and October 3, 2016, and obtaining a search warrant for the laptop.  She then said, “And then with respect to whether or not there should be congressional notification, the Director had already decided that he felt he had an obligation to do this, and we discussed that issue as well.”

Cohen pressed, “And after you discussed the issue, you didn’t suggest that he shouldn’t do this because it was so close to the election, or did you?” and Lynch responded, “The issue that was before myself and the Deputy Attorney General was what is the most effective way to stop this. And we had a number of options before us. And we felt bad knowing the Director as we both did, having worked with him, that a direct order was not likely to be obeyed, that it would be more effective to go through staff who could possibly influence him, because he had shown himself more receptive in those areas.”

“The way that it was presented to us, it was actually a fait accompli at that time,” Lynch continued. “We were trying to determine if, in fact, we could stop the letter from going out. If we could not stop it, could we see it, at least, before it went out. We weren’t able to see it…”

Transcript: Lynch Wanted to “Stop” Comey Letter to Congress on Weiner Laptop added on Wednesday, May 29, 2019