“IF IT’S EVER MADE PUBLIC” 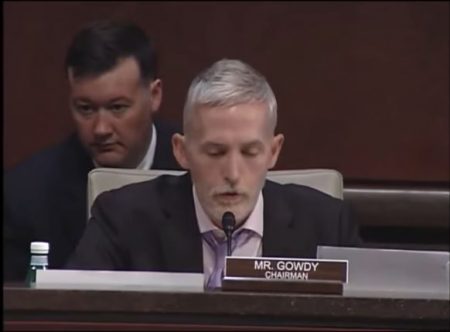 (May 19, 2019) — On May 19, former Rep. Trey Gowdy (R) told “Sunday Morning Futures” host Maria Bartiromo that “exculpatory evidence” existed when four surveillance warrants were applied for by the FBI and Justice Department on former Trump campaign adviser Carter Page on the premise that there was “collusion” between the campaign and the Kremlin to affect the outcome of the presidential election.

Now a Fox News contributor and in private law practice, Gowdy served as chairman of the House Oversight & Government Reform Committee and questioned a number of witnesses behind closed doors in 2017 and 2018 who were involved in the origins of the FBI’s “collusion” probe.

In the four-minute segment, Gowdy strongly suggested that “exculpatory evidence” was not made available to the Foreign Intelligence Surveillance Court (FISC), which decides whether or not to approve a surveillance warrant on a U.S. citizen.  FBI policy requires that that evidence be presented to the court, along with the government’s application for surveillance, Gowdy said, so that the court can make an informed decision on the request.

Although placed under surveillance for a year, Page was never charged with a crime and, in fact, had been known to the FBI as a source of Russia intelligence information gleaned from his military background, Page told journalist Sharyl Attkisson in an interview in March.

Bartiromo began the interview by asking Gowdy about Democrats’ recent criticism of Attorney General William Barr, who has pledged to investigate the origins of the FBI’s counterintelligence probe into the Trump campaign given that a 22-month special-counsel investigation concluded in March that there was no “conspiracy” between the campaign, or any American, and Russians to impact the election.

Gowdy said he believes Democrats would be critical of any attorney general under the current administration.  Quickly thereafter, he posed several questions he said he would like to see answered about the FBI probe, including, “Where are the transcripts, if any exist, between the informants and the telephone calls to George Papadopoulos?”

In 2016, Papadopoulos was a Trump foreign-policy adviser who wrote in his book, “Deep State Target,” that he was approached by at least six mysterious figures while working in Europe, all wanting to know about “Russia” as it related to his work on the campaign.

Papadopoulos now believes he was the subject of a FISA warrant, that transcripts exist of his conversations with those individuals, and that they were deployed by the FBI to “entrap” him.  In October 2017, he who accepted a “guilty” plea for lying to two FBI agents who questioned him in connection with the FBI and Mueller investigations, although in his book he stated that gave erroneous answers rather than deceptive ones since he spoke with them without an attorney and did not have his date book with him at the time to check the accuracy of his responses regarding dates and times.

Barr shocked many in the political world when he told Congress last month that “spying did occur” on the Trump campaign and that he is seeking to discover whether or not it was “adequately predicated.”

On Friday, FNC’s Bill Hemmer interviewed Barr on that topic and others in El Salvador, where Barr traveled for meetings with Central-American colleagues about gang, drug- and human-trafficking concerns.

Gowdy told Bartiromo that he “hopes” that Barr will find “someone who’s skilled enough to answer” the questions he has about the origins of the Russia investigation.

Referring back to  Bartiromo suggested that transcripts exist of “FBI agents” who spoke with Papadopoulos.  “When an FBI agent sends in informants to someone they’re looking at, typically, those conversations are recorded, right?  Those people are wired.” Gowdy responded that if “the Bureau” deploys an informant to interact with a particular subject, “the informant’s going to be wired, and if the Bureau’s monitoring telephone calls, there’s going to be a transcript of that.”

Papadopoulos was one of Bartiromo’s guests on May 5 And has suggested in a number of interviews that “exculpatory evidence” applied to his prosecution in which he accepted a plea deal, served 11 nights in federal prison, was required to perform 200 hours of community service and pay a $9,500 fine.

“Some of us have been fortunate enough to know whether or not those transcripts exist, but they haven’t been made public,” Gowdy continued, “and I think one in particular has the potential to…be a game-changer if it’s ever made public.”

Bartiromo said, “You say it’s ‘exculpatory evidence’ and when people see that, they’re going to say, ‘Wait, why wasn’t this presented to the court earlier?'” to which Gowdy replied that “exculpatory information,” if it exists, should be provided to the court in the interest of telling “the whole truth.”  Former federal prosecutor and current Rep. John Ratcliffe, who also questioned witnesses at length last year, has also “seen” the “exculpatory information,” Gowdy said.   “I’ve seen it; Johnny’s seen it; I’d love for your viewers to see it,” Gowdy concluded his thought.

“So that’s the transcripts of FBI agents and George Papadopoulos,” Bartiromo said, then transitioned to a related topic.  “We’re going to be on the lookout for that.”

Bartiromo then asked about an email which Comey “wrote to his upper-echelon staff.”  On last Monday night’s “Hannity,” Gowdy had spoken about an email between Comey and former CIA Director John Brennan from “December 2016.”

Gowdy then broke more news when he said that the Russia “dossier,” compiled by former British intel agent Christopher Steele as opposition research on Trump for the DNC and Clinton campaign, might have been used “a fifth time” in the “Intelligence Assessment” issued in early January 2017 by the U.S. intelligence community titled, “Assessing Russian Activities and Intentions in Recent US Elections.”

Steele had worked for the British intelligence equivalent of the FBI, MI6, and had been an FBI confidential human source until the Bureau terminated the relationship in the fall of 2016 following Steele’s unauthorized disclosures of his work to the media.

“You got [former CIA Director John] Brennan, [former Director of National Intelligence James] Clapper and Comey — all three who know full-well whether or not it was used in the Intelligence Assessment, but they’re giving you different versions,” Gowdy said.  “There is information that exists in December of 2016, and I hope anyone who has access to it…who is open-minded, go look at that, and I think it will help you understand whether or not that dossier — that unverified hearsay — was used five times or just four times by the United States government. It’s pretty bad if it was just four times; it’s really bad if it was five.”

Update, 4:40 PM EDT:  As this article was going to press, Papadopoulos tweeted, “Remember this when the FISAs are declassified, showing that one was illicitly issued on me, I have NEVER even met a Russian official in my life, let alone on the campaign/transition. All the operatives were working with the CIA/FBI/MI6. People are going to jail for conspiracy.” [sic]

Update, May 20, 2019, 8:41 a.m.:  Fox News has released the video of Gowdy’s exchange with Bartiromo on Sunday.  This writer notes that the title of the article in which the video is embedded is not consistent with what Gowdy said about Comey, Clapper and Brennan’s knowledge as to whether or not the dossier was used in the early January 2017 Intelligence Assessment.

Former Rep. Trey Gowdy: “Exculpatory Evidence” Could Be “Game-Changer” added on Sunday, May 19, 2019