“THE CABAL THAT HAMMERED DONALD TRUMP IS OVER AFTER TODAY” 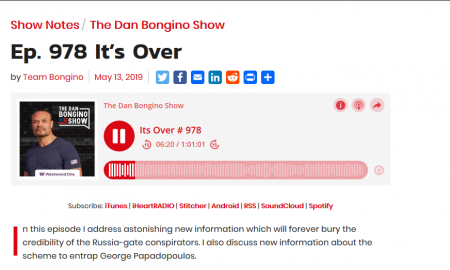 (May 13, 2019) — On Monday’s edition of The Dan Bongino Show, titled, “It’s Over,” host Dan Bongino expounded on the claims the FBI made to the FISA court to obtain surveillance warrants on former Trump campaign adviser Carter Page beginning on October 21, 2016 which were belied by information the Bureau received ten days earlier from a State Department employee who documented that the “Steele dossier” was politically-motivated and contained provably false information.

The FBI used Christopher Steele’s Russia dossier as its main evidence in applying for the warrants, stating in two footnotes that it possessed “no derogatory information” on its source which would have weakened its case for obtaining the warrants.

By the time the first warrant application was filed with the court, Page was no longer a Trump campaign adviser (p. 4) but was described as “an agent of a foreign power” (p. 2).  He was never charged with a crime.

Major portions of the FISA warrant applications, consisting of a total of 412 pages, are redacted.  A footnote on pages 15 and 16 states to the court that “the FBI is unaware of any derogatory information pertaining to Source #1,” referring to Steele. 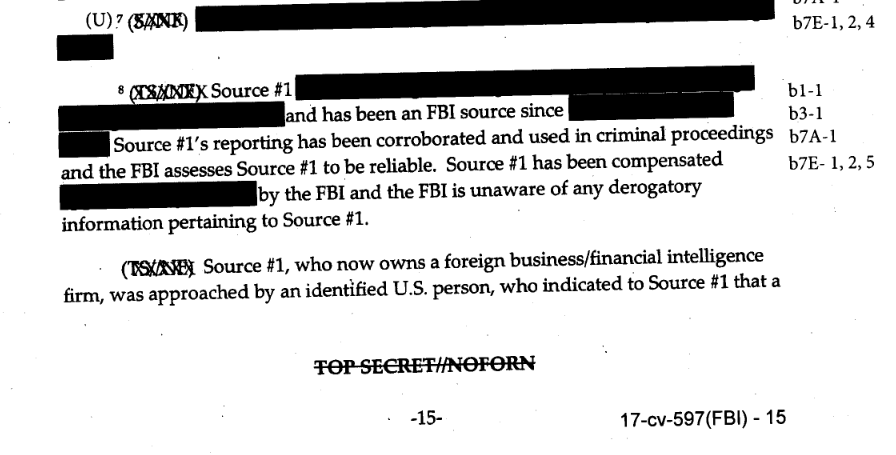 The Steele dossier suggested that the Trump campaign “colluded” with the Kremlin to affect the outcome of the election and that Russia possessed information which could be used to blackmail Trump.  Circulated throughout the federal government in various forms and leaked to the media prior to the election, the dossier fueled the FBI’s counterintelligence investigation into the Trump campaign which eventually was handed to Special Counsel Robert Mueller.

Expounding further, Bongino said that “some friends” of his “did some homework” and found that State Department employee Kathleen Kavalec’s handwritten notes, revealed last week by John Solomon of The Hill, indicated that according to Steele, who met with Kavalec on October 11, 2016, former Trump attorney Michael Cohen went to Prague, Czechoslovakia to allegedly pay Russian operatives for Hillary Clinton’s stolen emails.  “The sole basis in the dossier for the Trump knowledge of this collusion scandal is that his lawyer paid for this information from the Russians in Prague,” Bongino said.  “He’s never been to Prague.”

The “Mueller report,” completed in March and released publicly in April, reported that Cohen never traveled to Prague (p. 351).

Bongino said that the FBI has had in its possession Kavalec’s typed notes from her meeting with Steele since shortly after it took place but that her handwritten notes were concealed from congressional investigators until recently.  Quoting from Solomon’s column, Bongino added that “a few weeks ago,” the FBI placed a “classified” designation on the handwritten notes.

Kavalec’s typed notes say that Steele, then associated with Orbis Security, undertook his investigation in June 2016 and “is keen to see this information come to light prior to November 8.”

On October 19, Bongino pointed out (9:00), Steele told the FBI that his source, referred to as “the Kremlin insider,” “was unsure of the identities of the officials with whom Cohen met secretly or the exact date or location of the meeting.”

“You weren’t unsure eight days ago,” Bongino commented, as if speaking to Steele.  Kavalec then sent her typewritten notes to a number of parties redacted from the public release but which have been confirmed by a congressman to have included the FBI.

A FISA application requires that the submitting government official swear that the information provided to the court has been verified according to 2001 FBI protocols.  In his testimony to congressional investigators last fall, former FBI general counsel James Baker described a multi-layered process for the preparation and submission of FISA warrant applications so as to safeguard constitutional rights and civil liberties.

Baker is under investigation for possibly leaking to the media.

One Response to "Bongino Reveals “Stunning” Information on Russia Narrative"