Nunes: Mysterious Professor Who Approached Papadopoulos “Connected with All Kinds of Intelligence Agencies”

“INCLUDING OUR OWN FBI”

(May 4, 2019) — In an interview on Friday night’s “Hannity,” House Intelligence Committee ranking member Devin Nunes said that a Maltese professor who in 2016 approached Trump campaign adviser George Papadopoulos claiming that “the Russians” had possession of Hillary Clinton’s missing emails from the private server she used while secretary of state is “connected with all kinds of intelligence agencies.”

Nunes’s appearance on the YouTube rebroadcast begins at 21:43. He began the interview by citing the “Mueller report” released last month, which divulged that a 22-month special-counsel investigation discovered no evidence of a conspiracy between Trump campaign aides and the Kremlin to affect the outcome of the 2016 presidential election, as had been suspected by the FBI.

The report, Nunes said, cited an October 31, 2017 article from The Guardian (UK) which reported that Prof. Joseph Mifsud was associated with the Link Campus University in Rome and “has a relationship with at least one senior Russian official in London.”  Critical of Special Counsel Robert Mueller’s work, Nunes told Hannity of his review thus far of the report, “One of the first things that we found is that they used a news report, a Guardian news report, to claim that the Link Campus was a place where Mifsud had worked.  What they failed to say in that same report is that Mifsud was actually related to Italian intelligence services. So, you can’t — if you’re Mueller, you don’t get to just report part of what you want in the story; you have to put the entire piece before the American people.  He didn’t do that, so we’re calling him out.  This is not how investigations are supposed to be run.  When you look into Mifsud closer, Professor Mifsud closer, you realize that he is connected with all kinds of intelligence agencies, including our own FBI.”

Papadopoulos has made the same claim about Mifsud and the FBI frequently on Twitter over many months.  Papadopoulos is author of “Deep State Target: How I Got Caught in the Crosshairs of the Plot to Bring Down President Trump,” published in late March.

Nunes referred to a letter Hannity held up at the outset of the exchange which Nunes on Friday sent to the NSA, CIA, and FBI asking for background information on Mifsud.  “And in that letter, Sean, you’ll see there’s pictures with FBI agents at the Link Campus where Professor Mifsud teaches at,” Nunes continued.  “So we asked the question, and I’ll sum it up like this:  We want to know every document that these agencies have related to Mifsud, because if he is in fact a Russian agent, this would be one of the biggest intelligence scandals for not only the United States, but also our allies, like the Italians and the Brits and others, because if Mifsud is a Russian agent, he would know all kinds of our intelligence agents throughout the globe.  So we asked those questions; we want those documents; we’re giving them a week.”

On paper, Joseph Mifsud – who has emerged as a central figure in the criminal investigation into possible collusion between the Kremlin and the Trump campaign – looks like a seasoned professional in diplomacy and academia.

A fawning profile published in 2014 described the Malta native as a top former government official who helped negotiate his country’s entry into the European Union and later became head of the “venerable” London Academy of Diplomacy.

But a closer look at Mifsud’s record raises more questions than answers about the man who federal investigators now say told a young Trump campaign adviser that the Kremlin had “dirt” on Hillary Clinton. Evidence has also emerged that suggests Mifsud has a relationship with at least one senior Russian official in London.

In September 2017, Papadopoulos accepted a “guilty” plea with the Justice Department for lying about the timing of his meetings with Mifsud, a point he expressed in the opening pages of his book.  Although last fall he indicated that he might withdraw the plea given new information which had come to light, late last year he served 12 days in federal prison and was required to pay a $10,000 fine and perform 200 hours of community service.

He has nevertheless said he was “framed in many ways.”

Papadopoulos has further claimed that Mifsud has been shielded by the Italian government for some time.  On April 18, Papadopoulos tweeted that Mifsud “has been outed by our Italian Friends today.  He is living next to the US embassy in Rome. Can’t wait for him to reveal who his FBI handlers were.” 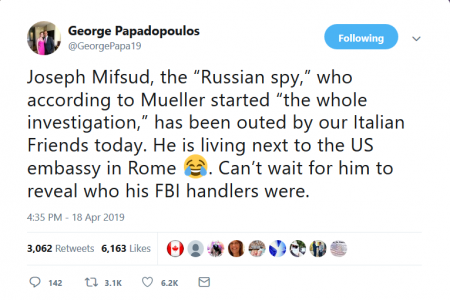 In an interview with Dan Bongino on Friday, Papadopoulos said, “Mifsud’s lawyer is going out with new info about how people were prodding Mifsud to set me up…When President Trump called the Italian PM last week, it wasn’t a coincidence.”

In a November interview with Bongino, Papadopoulos said he was approached by no fewer than a half-dozen individuals in 2016 who he did not know who were attempting to pry information out of him about the Trump campaign’s coordination with Russia, one of whom was a woman who introduced herself as “Azra Turk.”

On Thursday, The New York Times, which first identified the FBI’s counterintelligence probe into the campaign as “Crossfire Hurricane,” reported that the FBI dispatched an “investigator posing as an assistant” to question Papadopoulos in London.  “The F.B.I. sent her to London as part of the counterintelligence inquiry opened that summer to better understand the Trump campaign’s links to Russia,” The Times wrote, although Papadopoulos has said he believes it was the Central Intelligence Agency (CIA) which sent her.

“Turk” was said to be an assistant to Cambridge University professor emeritus Stefan Halper, who was outed months ago as a long-time U.S.-government informant on projects over many years, including the FBI’s probe into the Trump campaign.

Hannity asked Nunes if the U.S. intelligence community “may have outsourced things that were illegal for them to do to Americans” to foreign intelligence services, such as those in the UK, Australia and Italy, all nations Papadopoulos has identified as having been involved in “spying” on the campaign.  “Am I over the target here?” Hannity asked, to which Nunes responded, “I think you are, and one of the things that we point out in the letter is we’re very specific, because the FBI, or I should say, the Mueller group, claims that Papadopoulos misled them and they were not allowed to get to Professor Mifsud in time in order to interview him — this are the claims that they make against Papadopoulos when they sentence him to prison.  Now what we found is, ‘Well, wait a second; if this really happened, and if you backtrack all this and they’re basically making the claim that Mifsud is the guy who said he had emails or he knew the information about the emails being in the hands of the Russian government — if that is, in fact, true, they couldn’t talk to Mifsud supposedly until January, February of 2017.  Well, how do they know to ask Papadopoulos all through 2016 whether or not he’s seen the Russian emails or whether he knows about Russian emails?  The only way that’s possible is that had to come from Mifsud some way, somehow.  So I think it’s more likely that I’m going to be a starting center on an NBA basketball team before Mifsud is a secret Russian agent.”

Nunes said that in his continuing investigation of the origins of the “Russia collusion” probe, “we have to be slow and patient…we need to see what exactly was the relationship between Mifsud and our FBI, Mifsud and our State Department.”

Toward the end of the segment, Nunes described the FBI’s operation as “sophisticated” and said he “wants to know how many spies were run into the Trump campaign.”

Papadopoulos and his wife Simona were interviewed in the next segment. Papadopoulos confirmed he had met with Mifsud at the Link Campus in Rome and later in London. He said that Mueller in his report “falsely characterized [Mifsud] to the world as some sort of Russian cutout.”

He also described the Link Campus as a place where “the CIA and the FBI trains at.”

“This whole thing was a complete setup,” Papadopoulos said.

On Saturday he tweeted that he will appear on “Sunday Morning Futures” with Maria Bartiromo, which airs at 10:00 a.m. ET.

Nunes: Mysterious Professor Who Approached Papadopoulos “Connected with All Kinds of Intelligence Agencies” added on Saturday, May 4, 2019