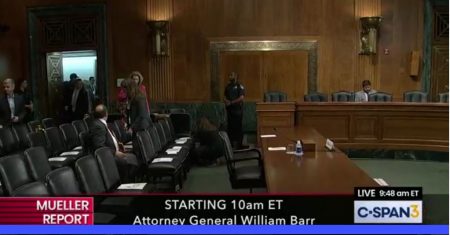 (May 1, 2019) — Attorney General William P. Barr will be testifying to the Senate Judiciary Committee Wednesday beginning at 10 AM as to the completion and release of the much-anticipated “Mueller report” on Russian interference in the 2016 presidential campaign.

During his confirmation hearings in January, Barr pledged to committee Chairman Lindsey Graham that he would investigate the origins of the FBI’s 2016 counterintelligence probe into the Trump campaign alleging that campaign members were “colluding” with Russian operatives to gain an election advantage over Democrat Hillary Clinton.

For his part, Graham plans to investigate actions taken by the FBI and DOJ to spur the opening of the FBI investigation but has also called upon the Justice Department to appoint a special counsel.

Trump had always denied the claims and declared what ensued, a 22-month investigation led by Special Counsel Robert Mueller and a team of Democrat prosecutors, as “a witch hunt.”  Mueller was hired by Deputy Attorney General Rod Rosenstein to assume the probe after Trump fired FBI Director James Comey on May 9, 2017.

Many questioned Mueller’s impartiality given that he had interviewed with Trump for the FBI director’s job the day prior to his appointment as special counsel.

On Tuesday evening The Washington Post published an article claiming that on March 27, five days after he delivered his report to Barr and three days after the latter released a four-page “bottom-line” appraisal of Mueller’s findings to congressional leaders which was made public, Mueller composed a letter of his own to Barr claiming that Barr’s characterization of the report’s conclusions was insufficient and lacked “context.”

Numerous articles based on The Post‘s report repeat the same claim, but as of this writing, no media source appears to have released the actual letter Mueller allegedly wrote.  The Post article states that the paper has “reviewed” the letter.

Mueller was reportedly unhappy with media reports based on Barr’s March 24 letter which stated that Mueller’s team found no evidence that Trump campaign members, nor any American, conspired with Russia to affect the outcome of the election.

Barr also said that Mueller’s finding of “obstruction of justice” was inconclusive, finding insufficient evidence for a criminal prosecution while at the same time contending that the team’s conclusion “does not exonerate him.”

Additionally, The Post article reported, at the time Mueller allegedly wrote his letter, he requested that Bar release portions of the report to clarify to the public more accurately but his team had concluded. In a reported phone call the day after Bar received Mueller’s letter, Bar reportedly indicated that he wished to release the entire report after the necessary rejections were made.

Some have argued that Trump could not have obstructed justice as he expressed frustration over the nearly-two-year probe which cast a cloud over his presidency if the underlying alleged crime was never committed, which the Mueller report confirmed. Mueller’s 448-page report sites alleged instances of exchanges between Trump and his top advisers in which he reportedly asked them to fire Mueller or to limit the scope of his investigation.

In the end, however, Trumps advisors reportedly did not follow through on any orders which Trump may have issued.

During his confirmation hearings, Barr had said he felt it was important for Mueller to finish his investigation unimpeded and that he and Mueller were personally acquainted over more than three decades.

The full report with redactions for grand-jury testimony and ongoing investigations was released April 18.

While Barr testified to the House Subcommittee on Appropriations on April 9 that he had offered Mueller a chance to review his March 24 letter before its release, many Trump opponents are already calling for Barr’s resignation or “impeachment.”

Barr to Testify to Senate Judiciary Committee Wednesday Morning added on Wednesday, May 1, 2019