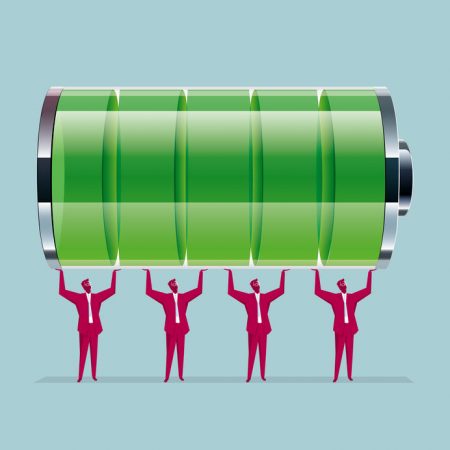 (Apr. 27, 2019) — Utilities are starting to experiment with adding batteries to wind and solar projects. These storage projects are feeding the mistaken belief that batteries can cure the intermittency that makes wind and solar unworkable as a reliable source of power.

The reality is that these battery projects are trivial in size compared to what would actually be needed to make wind or solar reliable. The cost of battery based reliability would actually be stupendous, far more than we could ever afford.

Here are some simple numbers to make the point. The reality would be far more complex, but the magnitude would not change much.

First comes the cost of utility scale battery facilities. This is much more than just the cost of the batteries. At utility scale these are large, complex facilities. Connecting all of the batteries involved and getting them to work properly together is a big challenge in itself. AC-DC-AC conversions are also a big deal, plus there are buildings, transmission stuff, etc.

In many cases these costs are proprietary, but the U.S. Energy Information Administration has surveyed a number of these facilities. See their “U.S. Battery Storage Market Trends,” May 2018.

The reported costs are pretty wide ranging, but the average is close to $1,500 per KWh, so let’s use that round number.

Note that this is the cost per KWh of storage capacity, not the KWh cost of energy from the batteries taken over time, which is a very different matter. There is a lot of confusion on this point. The KWh cost of juice goes down as the batteries are cycled more often, but the cost of the battery facilities themselves does not change. In fact the cost may go up because batteries that can be cycled faster cost more.

A smallish wind farm might have generating capacity of 100 MW, so costing around $150 million. The cost of the batteries to make this farm a reliable power generator turns out to be much, much greater.

Suppose we want to store enough juice to back up the wind farm for just one day, when the wind speed is too low to generate any power. Let’s say we simply need 100 MW for 24 hours, or 2,400 MWh.

At $1.5 million per MWh that is a whopping $3,600 million or $3.6 billion. In short, the batteries cost 24 times more than the “backed up” wind farm costs. In fact in this case the battery cost will be the number of hours times the wind farm cost.

This huge cost certainly makes the wind farm unaffordable, but it gets much worse. Under standard conditions a wind farm produces no power around 25% of the time, due to low wind conditions. Low wind periods of up to a week are fairly common, created by stagnant huge high pressure systems. The power battery system has to be big enough to accommodate these long periods of no wind power.

A week has 168 hours so we need 16,800 MWh of battery storage capacity, at the enormous cost of $25.2 billion, just to make a $150 million wind farm reliable. This would obviously be absurd, which makes the whole idea of battery backup absurd. Even if the cost of batteries were to come way down, say by 90%, the cost would still be wildly prohibitive.

The battery systems that are being announced by major utilities are nothing like real backup. They seldom store even an hour’s worth of generated power (at great price). But they are often touted as being a big step toward making renewables reliable. This is either deep ignorance or pure deception.

Batteries simply cannot make renewables reliable. They cost too much.