Congressional Testimony: Comey Concerned for What Trump “Would Think about the Bureau”

(Apr. 20, 2019) — On page 68 of the transcript from the second day of closed-door congressional testimony last year by former FBI General Counsel James Baker, counsel for the then-House Democrat minority Sachsman Grooms asked Baker to confirm that the Trump-Russia “dossier” was not the catalyst for the FBI’s counterintelligence probe into the Trump campaign.

Regardless of whether or not it served as the flash point to open the investigation, the dossier was used to obtain four successive FISA warrants on then-Trump campaign adviser Carter Page, who had lived in and transacted business with Russia.

In December behind closed doors, former FBI Director James Comey reportedly admitted that the dossier’s claims were unverified despite his and others having vouched for its reliability to the FISA court beginning in October 2016.

Instructed by an unidentified FBI counsel to respond to the question only “in an unclassified setting,” Baker said, “And I think the answer is it did not have to do with the dossier.”

Sachsman Grooms then quoted from testimony from former FBI Counsel to the Deputy Director Lisa Page, who told congressional investigators last July in two closed-door hearings that the FBI was attempting to discover if there was “someone associated with the campaign who is working with the Russians in order to obtain damaging information about Hillary Clinton.”

Public reports say that then-informal Trump campaign adviser George Papadopoulos made remarks to then-Australian ambassador to the UK Alexander Downer in May 2016 about “the Russians” having Clinton’s emails which served as the instigator of the FBI’s investigation.  Reportedly, Downer notified the FBI on July 26, 2016, and the FBI opened its probe on July 31.

Papadopoulos, who has written a book titled “Deep State Target: How I Got Caught in the Crosshairs of the Plot to Bring Down President Trump,” disputes that assertion, having stated numerous times that he was under surveillance by the Obama regime’s intelligence community since sometime in 2015 based on his dealings with the Israeli government.  Papadopoulos has also claimed he does not recall mentioning “emails” during his “hostile” exchange with Downer.

Former House Intelligence Committee Chairman and current ranking member Devin Nunes has also said that the unprecedented investigation into the Trump campaign began in “late 2015” or “early 2016.”  On Thursday’s “Hannity” show, investigative journalist John Solomon reported that its origin was in the Obama White House in “January 2016.”

Baker testified that it was crucial that the FBI keep its counterintelligence probe “secret” because of its “national security” implications (p. 70).

On page 71, Sachsman Grooms moved on to discussing the written and oral statements made by former FBI Director James Comey about his interactions with Trump both before and after his inauguration as compared to private conversations Comey had with Baker about those events.

On June 7, 2017, one month after he was fired, Comey testified to the Senate Intelligence Committee that he documented his interactions with Trump in a series of memos on an agency-issued computer.  One of the memos, Comey said, he released through “a close friend,” Columbia Law School professor Daniel Richman, to The New York Times in the hope of spurring the Justice Department to hire a special counsel.  By that time, Deputy Attorney General Rod Rosenstein had brought in former FBI Director Robert Mueller to serve in that capacity.

Mueller’s probe, assumed from the FBI, would last 22 months through March 22, 2019, concluding that no one from the Trump campaign, nor any American, conspired with Russians to affect the outcome of the 2016 election.

Although never verified, former FBI Director Andrew McCabe and other former FBI officials have defended the inclusion of the dossier in the FISA warrant applications.  The 35-page set of documents was compiled by former British intelligence agent Christopher Steele and paid for by the Clinton campaign and DNC, a fact of which the court was not apprised.

Republicans who grilled McCabe in private testimony have said that McCabe characterized the dossier as an essential part of the “evidence” presented to the Foreign Intelligence Surveillance Court (FISC).  McCabe has disputed that account.  Last year he was referred for possible criminal investigation after the Justice Department’s inspector general determined he was dishonest with investigators about his contacts with the media or authorizations he gave others to divulge FBI information.

In contrast, in his testimony last summer, DOJ official Bruce Ohr said he advised an FBI contact to whom he was relating elements of the dossier after direct communications with Steele that the information was unvetted and possibly came from a biased source.

By its own regulations, the FBI is expected to present only thoroughly-vetted information to the FISA court with any accompanying exculpatory documentation for the court’s consideration before granting a surveillance warrant on an American citizen.  The applications contended that Carter Page was “an agent of a foreign power” and that the FBI obtained its evidence from “the U.S. Department of State.”

The applications did not divulge that Page, a U.S. Naval Academy graduate, had previously assisted the FBI in investigations involving Russia.  Despite the allegations made in the FISA applications, Page was never charged with a crime nor interviewed by the FBI, and the Trump campaign was never given a defensive briefing.

Continuing her line of questioning, Sachsman Grooms asked Baker about Comey’s memorialization of “the January 6 (2017) Trump Tower briefing” during which Comey informed then-President-Elect Trump of the existence of the dossier.

Comey would reportedly describe its contents as “salacious and unverified,” despite having signed the first Carter Page FISA application attesting to its veracity.  Baker has described Comey as a man of integrity.

In his first memo, Comey reportedly wrote that he spoke “with the FBI leadership team” as to “whether I should be prepared to assure President-elect Trump that we were not investigating him personally.” “He then wrote that he did offer President Trump that assurance,” Sachsman Grooms said.

When Sachsman Grooms asked Baker if Comey’s memo was consistent with “what Director Comey recounted to you about the meeting,” Baker responded that without Comey’s written testimony or a copy of the memo in front of him, “that sounds accurate.”

The FBI counsel then permitted Baker to expound on “any other details” he recalled from his conversations with Comey about the January 6 meeting (p. 73), the date of which he needed to be reminded (p. 74).

Amplifying accordingly, Baker said, “How it was–what was going to be said, how it was going to be conveyed, who would be in the room, and then what would–and then getting an assessment from the Director afterwards about how it all had gone down. So I was involved in all of that trying to figure out how to do it.”

According to Baker, he received a description of Comey’s Trump Tower meeting from McCabe, whose account Baker said was consistent with Comey’s.

Baker said that “more details” Comey divulged to him associated with Comey’s June 7, 2017 congressional testimony included such items as “the atmospherics in the room” and Comey’s “concerns that he had going in with having to convey this information, being the one selected to convey the information, how uncomfortable he was about that.”

The presence of an FBI agent was decided against, Baker said, because “the Director was anticipating a long relationship with the President, and he wanted to have that relationship founded on–founded on trust. And–meaning that the–that the President could count on the Director to always tell him the truth and to advise him to the best of his ability.”

In his prepared remarks to the Senate Intelligence Committee, Comey testified that he felt the need to document all of his interactions with Trump, unlike his practice with Trump’s predecessor, Barack Obama.

After Sachsman Grooms asked if Comey shared any “concerns” about the briefing, Baker said that Comey communicated “his uncomfortableness with being the person having to convey this information to the President.” Reportedly, the question of how Trump “would think about the Bureau” and whether or not it would be “negatively” were also “concerns.”

On pages 11 and 12 of Mueller’s final report released on Thursday, Mueller revealed the partial contents of a revised but to-date largely-redacted scope memo dated August 2, 2017 based on the dossier’s claim that Page and two other Trump campaign members “committed a crime or crimes by colluding with Russian government officials with respect to the Russian government’s efforts to interfere with the 2016 presidential election.”  Along with Carter Page, Mueller received instructions to investigate Papadopoulos; Trump’s first national-security adviser, Lt. Gen. Michael Flynn (Ret); and former Trump campaign manager Paul Manafort. 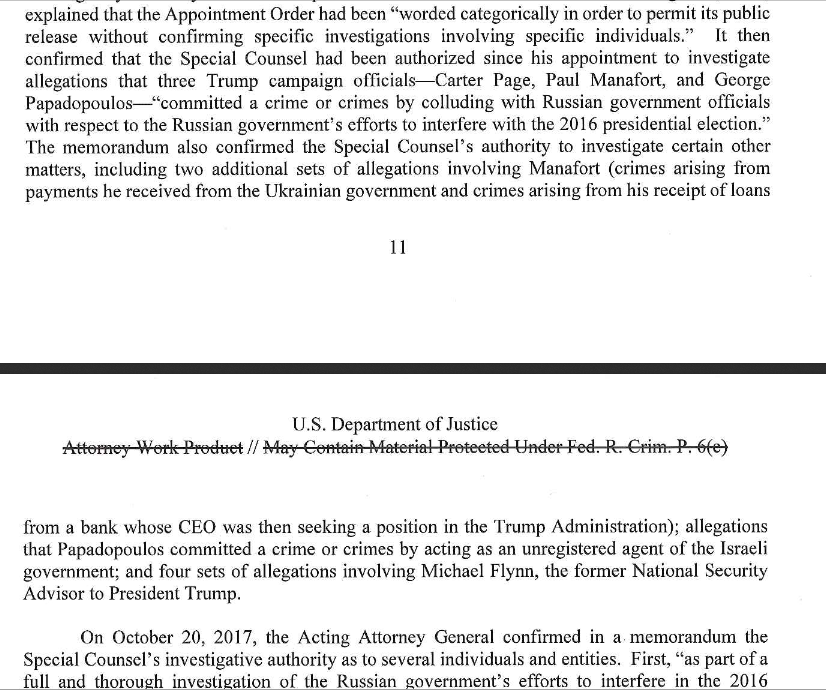 From the outset, Rosenstein provided all oversight to the Mueller probe resulting from then-Attorney General Jeff Sessions’s recusal from all matters pertaining to “Russia.”

As Mueller explained in Volume I of his reports, “collusion” is not a legal term in the American lexicon and therefore, his probe focused on applications of the term “conspiracy.”

Baker and McCabe have testified that Rosenstein suggested in a private discussion that he “wear a wire” to record Trump in the days following Comey’s firing with the apparent intent of collecting evidence of “obstruction of justice,” the subject of “Volume II” of Mueller’s report.

Congressional Testimony: Comey Concerned for What Trump “Would Think about the Bureau” added on Saturday, April 20, 2019