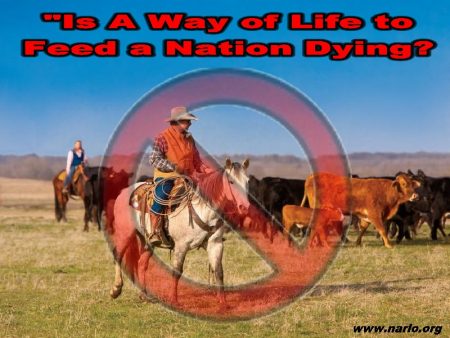 (Apr. 14, 2019) — “The Great Western rural landowner epitomizes the raw courage, self-reliance and fierce independence of Western America’s past.  He (or she) must not only face what nature and the markets can throw at him, he must suffer and endure the ravages of government regulation and interference.  The Great Western rural landowner is a testament to fortitude, endurance and self-determination, those characteristics necessary to preserve and maintain liberty.”     Ron Ewart

In an article we wrote back in late 2009 entitled:  “Do Only Real Americans Live In Wyoming?” we began with:

“Dawn was breaking over the Circle P in Western Wyoming.  The Sun had not yet broken above the East horizon but the growing light cast an eerie orange glow on last night’s fresh snow that had put an ermine blanket on the Tetons.  A few puffy clouds lingered at the top of the peaks but would soon disappear from the Sun’s rising heat.  The sky was not yet blue.  The trees on the hillside had already turned to several shades of yellow and orange but appeared in dark, grey tones because of the low light.  Winter was just around the corner.”

“The valley below the ranch house was still shrouded in a low ground fog.  A horse’s rump without any legs and a hundred fence-post tops in a row appeared above the fog, like a pastel picture only half painted.”

“John Portal stretched his arms into the air as he drank in the morning scene from the picture window of their ranch house.  As he slowly lowered his arms, Jenny, John’s wife, still in her robe, snuggled under one of his arms in a sideways hug and shared the beauty of the new day that was just now presenting itself to the Portal’s of Wyoming.  John and Jenny could but linger for a short while in the rapture of the moment.   There was much work to be done before the Sun would set again on the Circle P.   Jenny broke away from their hug to wake up their two children and then headed for the kitchen.   John started towards the bathroom to shave and get dressed.”

“John and Jenny were both fifth generation ranchers.  John had inherited their thousand-acre spread from a long-line of independent, self-reliant, tough pioneer stock Portals, born and bred from the days of the adversity of the old West.  John and Jenny met in high school and a bond between them was forged almost instantly.  Jenny was the daughter of another fifth generation Wyoming rancher.  Both were the product of the American free spirit, who daily stared adversity directly in the face and pressed forward, no matter what was in their way.”

The story of John and Jenny went on to tell about all of the problems facing American livestock producers today from the perspective of one family rancher, mostly from being strangled by government regulation.  The reality of this massive intrusion into the “Great Western Lifestyle” by government was recently portrayed in a short Youtube video entitled: “Mother Nature vs. Government.”

We ended the story with:

“They thought they could live their lives without interference from their government, as the Constitution promises, but they were wrong.  They must now face the enemy who will not leave them alone.  Should the Great Western ranchers and farmers collectively turn their attention away from the weather and the land for awhile, and towards the government that now haunts them, the government would be wise to put their ears to the ground and listen for the hoof beats of an angry four horsemen.  That is of course, unless the American rancher and farmer have not been bought off by the government, like so many other segments of our once-free nation, who have similarly been bought off.  We can only hope not.”

The question lingers in the minds of many landowners, is the Great Western Rural Lifestyle dying or dead?  Sadly, many demographic and geopolitical indicators, as well as massive environmental regulations, point to a dying trend for the small- to medium-sized family farm and ranch.

Here is a quote from a Midwestern diary farmer:

“As dairy farmers we did everything right, I even earned awards for quality milk. But we had no control over rising fuel costs, feed and hay prices, plus the supplies, hauling, veterinary services, and everything else needed to produce milk, all of which has gone up at alarmingly high rates. Everyone else could raise their prices, but not the farmer.”

“The roller coaster price system is destructive. The farmer’s paycheck is what’s left over after everyone else profits or takes their costs first. The farmer gets very little from those inflated prices in the grocery stores that consumers pay.”

“Now we are desperately struggling to keep our beautiful cows and preserve our farm that has been in the family nearing 100 years.”

But this tells only half the story.  In an article by Alan Greenblatt, he wrote that: Rural areas have not kept up with anything like the population growth in cities and suburbs.  There’s nothing new about this — the number of rural legislative seats has been in decline for decades.  Still, there will be notably fewer legislators from rural areas taking Congressional seats as sessions get under way in January, even in farm states such as Indiana, Minnesota and Wisconsin.  [He failed to mention the 17 Western states] With fewer state lawmakers representing rural districts, issues important to rural areas may go unheard.“

“That means rural areas that traditionally dominated many chambers will now struggle even to be heard. ‘It will be difficult for the rural areas to predominate on certain issues,’ says former state Rep. Roger Lane, who oversaw the recent round of redistricting in Georgia, in which the metro Atlanta area took a majority of state House seats for the first time.”

But it gets worse.  A New York Times article from December 2018 laments that: “Rural America is Getting Old.”

The median age is 43, seven years older than city dwellers.  Its productivity, defined as output per worker, is lower than urban America’s.  Its families have lower incomes.  And its share of the population is shrinking: the United States has grown by 75 million people since 1990, but this has mostly occurred in cities and suburbs.  Rural areas have lost some 3 million people.  Since the 1990s, problems such as crime and opioid abuse, once associated with urban areas, are increasingly rural phenomena.

Rural communities once captured a greater share of the nation’s prosperity.  Jobs and wages in small town America played catch-up with big cities until the mid 1980s.  During the economic recovery of 1992 to 1996, 135,000 new businesses were started in small counties, a third of the nation’s total. Employment in small counties shot up by 2.5 million, or 16 percent, twice the pace experienced in counties with million-plus populations.

These days, economic growth bypasses rural economies.  In the first four years of the recovery after the 2008 recession, counties with fewer than 100,000 people lost 17,500 businesses, according to the Economic Innovation Group.  By contrast, counties with more than 1 million residents added, altogether, 99,000 firms. By 2017, the largest metropolitan areas had almost 10 percent more jobs than they did at the start of the financial crisis.  Rural areas still had fewer.

Because of the difficulties for small- and mid-sized food producers, suicide is becoming more common due to rising debt and insurmountable difficulties.  The Guardian recently wrote:  “Last year, a study by the Centers for Disease Control and Prevention (CDC) found that people working in agriculture – including farmers, farm laborers, ranchers, fishers, and lumber harvesters – take their lives at a rate higher than any other occupation.  The data suggested that the suicide rate for agricultural workers in 17 states was nearly five times higher compared with that in the general population.”

Government is trying to help through Senator Tim Scott’s (R-SC) Opportunity Zones initiative, providing significant long-term tax credits for investing in rural areas.  But the initiative may not be able to overcome the demographic and geopolitical factors that are exacerbating the rural areas’ decline.

Family farmers and ranchers are a hearty breed and they are trained from birth to never give up, no matter how difficult the task may be.  But if they don’t organize on a grand scale, they have no chance to survive.  The fact is, “Rural Landowners Are Prisoners On Their Own Land.”  Unfortunately, they may find themselves in a “David vs. Goliath” situation where there is simply not enough ammunition for their slingshots.  They may eventually have to face the unforgiving law of rapidly diminishing returns due to market and government forces.

That’s not as easy as it may sound.  Occupations that deal with working the land and self-employment are permanently ingrained in the soul.  The mindset of farmers, ranchers, independent truck drivers and loggers is totally different from their urban brethren.  You can’t train a man who has worked most of his life on the land, or his own boss in an 18-wheeler, to write computer code, or stuff parts in printed circuit boards.  He’ll go stark-raving crazy.

So what does the future hold for America’s rural landowner in a land where over 80% of the people now live in high-dense urban cities?  The thought processes of a city dweller are far removed from that of farmer, rancher, trucker and logger, or even the entrepreneur.   The city dweller thinks in terms of a job or what government can do for him.  The city dweller is, unknowingly, a slave to government.  In contrast, independent individuals think in terms of what he or she can do for themselves, by themselves, without government help …. and hopefully without government interference.  That characteristic is the “American” way.

Rural landowners may one day find themselves in the dilemma faced by the rancher in our story: “I Must Keep Running.”  Insane regulations caught up with this mythical rancher and he was forced to run from authorities.

Ladies and gentlemen, by the sheer magnitude of their numbers, the city dwellers (and the illegal aliens that will eventually be granted amnesty) will own the political arena and dictate to everyone else, from an urban socialist perspective.  The American conservative, the landowner and the independent entrepreneur will become less and less relevant, with declining political influence.  They may have to start another country where the freedom bell rings loud and clear and where the icon of the “Great Western Rural Lifestyle” will live again.  Or, the seventeen Western States, excluding California, Washington and Oregon, will have to secede from the Union.

But for the time being, while the environmentalists and the government continue to circle around the rural landowner like vultures on the wind, landowners need to avail themselves of our powerful, legally intimidating Constitutional No Trespassing signs HERE and HERE, for as long as trespass law exists.

One Response to "Is The Great Western Rural Lifestyle Dying?"