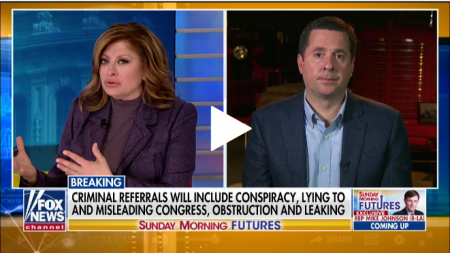 Nunes, who led the committee during the 115th Congress, said he and some of his colleagues have been investigating for “2½ years” the origins of the FBI’s counterintelligence probe into the Trump campaign alleging that someone might have been “colluding” with the Russian government to win the election.

The investigation was transferred to Special Counsel Robert Mueller in May 2017, eight days after FBI Director James Comey was fired.  On March 22, Mueller turned in a report to the Justice Department, now led by Attorney General William Barr.  Two days later, Barr reported that Mueller’s team found no evidence of the alleged “collusion” between any Trump-campaign member and the Kremlin.

At the same time, the House and Senate Intel Committees conducted their own investigations, with both announcing last year that they found no evidence of collusion.  Many Democrats voiced objections to those findings and pledged to continue the probes.

He and Mueller are reportedly combing through the report to redact any classified or sensitive information which cannot be released to the public.  The releasable portions are expected to become available in mid-April, Fox News has reported.

When asked to elaborate about the referrals, Nunes responded that all are considered “classified or sensitive” because of the information they contain.  He termed five “straight-up referrals” based on allegations of “lying to Congress, misleading Congress, and leaking classified information.”  The other three, he said, “are more complicated” and entail “conspiracy,” including misleading the Foreign Intelligence Surveillance Court (FISC) to obtain surveillance warrants, presumably on U.S. citizens.

Documentation released by the Justice Department and FBI last summer confirmed that former Trump-campaign adviser Carter Page was the subject of four continuous FISA warrants after officials claimed to the FISC that Page was an agent of the Russian government.  He has never been charged with a crime and is currently appealing the dismissal of a civil lawsuit he filed against the DNC for defamation.

In 2016, the DNC and Hillary Clinton campaign paid a private company, Fusion GPS, to gather opposition research on Trump and Russia.  Funds for the project were funneled through mega-law firm Perkins Coie, one of whose attorneys met with then-FBI General Counsel James Baker with alleged evidence of Trump-Russia “collusion” well before the election.

Another part of the investigation the committee conducted identified the leaking of classified information to the media, Nunes said.  “We think we got a pretty good idea of who some of the sources are behind these leaks,” Nunes told Bartiromo, specifically referring to Trump’s conversations with world leaders shortly after he took office, portions of which were leaked to major media.

Nunes said that one of the three more complex referrals is associated with those leaks. When asked, he declined to identify the individuals to be referred, although he said that some are well-known to Americans who have followed the twists and turns of the Trump-Russia investigation.

Once sent to Justice, the department has the option to investigate and prosecute or decline to take action.

In an interview with Sean Hannity last week, Nunes indicated that he expects to issue as many as two dozen criminal referrals in the near future.